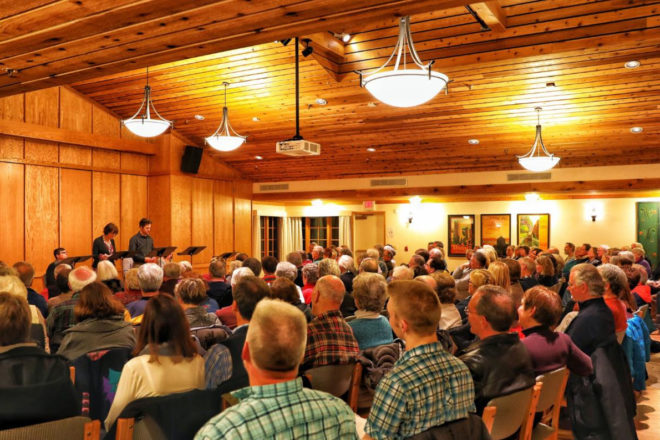 Audiences are enthralled during The Play’s The Thing, Peninsula Players Theatre’s winter play-reading series. (From left) Actors Noah Simon, Karen Janes Woditsch and Neil Brookshire present the 2018 reading of A Trick of the Light. Photo by Brian Kelsey.

The Play’s the Thing – Peninsula Players Theatre’s fully cast play readings – will take place at Björklunden in Baileys Harbor on Feb. 3, March 2 and April 6, all at 7 pm. Readings offer general seating, and there is no admission fee.

“Peninsula Players Theatre is excited to celebrate 10 years of bringing arts programming to audiences in our traditional off-season,” said managing director Brian Kelsey. “We are thrilled that the collaboration with Door County Reads that began 10 years ago remains fully embraced by the community. Once again, a variety of plays have been lined up by our artistic director, Greg Vinkler, for all to enjoy. Over the years, past play readings included theatrical gems and new works that delighted attendees.”

Popcorn Falls on Feb. 3 is a new comedy by James Hindman. Can the residents of the sleepy town of Popcorn Falls save themselves from bankruptcy by putting on a show? The reading is produced in coordination with Door County Reads and its exploration of Virgil Wander by Leif Engel.