In Norbert Blei’s tribute to Emma Toft in his 1981 book, Door Way, he noted that she was “a legend, bordering on myth.” A piece by Roy Lukes, written after Emma’s death on Valentine’s Day 1982, at age 91, described her as “Wisconsin’s first lady of conservation…who influenced people throughout the state, as well as visitors from other states and foreign countries.”

Today, Miss Emma is, indeed, revered as the savior of her family’s original home, Toft Point, and one of the primary forces behind the formation of The Ridges Sanctuary. 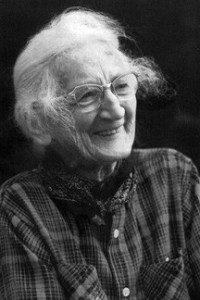 As is often the case, today’s heroine was not universally understood or beloved during her lifetime. She was a strong, independent woman in the day when strength and independence were not always viewed as desirable feminine traits. She was known to enforce at gunpoint her rule about not interfering with the flora and fauna at Toft Point. At least one Baileys Harbor resident remembers that the gun also came out when uninvited people breached the hedge in front of her home in the village.

Blei went on to describe his first sighting of Emma: “Though she smiled, spoke softly, possessed refinement enough to be a member of any Door County social set, here was this lovely woman dressed to the teeth in blue denim, work shoes and a red bandana. (Even before the blue denim craze in American society. Very recently, having been invited to dine at the Baileys Harbor Yacht Club, she entered the room dressed in her own inimitable fashion: blue denim and a red bandana.) She was the most striking old woman I had ever seen. And I loved her for that.”

Kristen Peil, a great-granddaughter of Hedwig Peil – another of Baileys Harbor’s great ladies, who most assuredly did not wear denim (although Kristen says she well might have, had it been available in her day) – lives next door to the Toft House, which is believed to be 147 years old. Last summer the town purchased the Toft House as the new home of the Baileys Harbor Historical Society. It now also houses the Baileys Harbor Visitors Center, a happy combination. As a member of the historical society board, Peil has been searching Emma’s attic – a space evidently untouched since her death – for clues about this enigmatic woman.

So, who was Emma Toft?

Despite many conversations and observations, Blei, the consummate writer of character studies, never felt that he really knew her. She told him that her first job, at 18, was teaching in a rural school in Rowleys Bay for $36 a month and that she walked back and forth from her home in Baileys Harbor. (That would have been the “original” home of the Toft family in the village, that sat on what is now a vacant lot, next door to the current Toft House.) Later, Emma taught 75 students in a school on County A in Jacksonport and did the janitor work, too, for $50 a month.

She laughed as she told Blei that the wonderful story about her lying down in front of a bulldozer that was trying to prepare for a trailer park on the land that later became the Ridges was not true. “Mertha Fulkerson, Jensen’s secretary, made that up,” Emma said. But she added, “If it was necessary, I would have done it.” 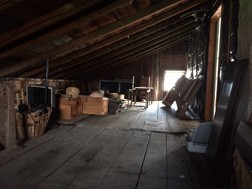 Perhaps most surprising to those who remember Emma as a tough old lady, sentimental only about wildflowers and the orphaned fawns that she bottle fed in her kitchen at Toft Point, is the fact that she cried as she told Blei that she had a boyfriend she met at Rowleys Bay.

“We were engaged,” she said. “He was killed in the war, the First World War…in France…I still had my people…you carry on…”

An assortment of the most interesting items Peil has unearthed in Miss Emma’s attic has been displayed in the glass case outside the entrance to the Baileys Harbor library. There are samples of wallpaper, red and gold, quite fancy for a modest home. (A cubbyhole under an old stairway in Peil’s house next door was also papered in the red-flocked design.) There are three pairs of Emma’s blue and grey denim jeans, all with the lady-like left-side zipper that isn’t seen anymore. Two pairs are quite small, while one is a size 20. That one has neatly-patched knees and a pocket mended with crude stitches in white thread.

There’s a disassembled crystal chandelier, a pair of clamp-on roller skates, a pair of well-used work gloves, a picture of Emma and a picture of Peggy Lee, a book of Shakespeare, a book of German grammar and a novel, From Log Cabin to White House, the life of President Garfield, written in 1888 by William Makepeace Thayer. Emma was evidently a music lover with eclectic taste. The display includes eight tracks of Pete Fountain’s New Orleans and the soundtrack of Dr. Zhivago. There are also LPs of Van Cliburn’s Romantic Selections, Pete Terrace, King of the Boogaloo, That Bad Eartha by Eartha Kitt, Sarah Vaughn and Dizzy Gillespie, Bing Crosby Going My Way, Duke of Iron Calypso and True Sound of Musical Tones by Popular Science.

Back in Emma’s attic, Peil is still unearthing relics. So far, she’s found: a tattered laundry basket with clothes that must have been Emma’s; a folding rack that would have held two wash tubs and a wringer; the top of an old sewing machine, used as a storage box; three turn-of-the-century umbrellas, one of them intact; assorted pans, lids and glass jars; a burlap-covered crate filled with eight-track tapes and record albums; bamboo fishing poles; several old inside doors and door frames and lumber saved from long-ago remodelings; an ancient two-burner stove; and two pairs of bib overalls. The basement likely also had items dating to Emma’s day, but it was inundated in the Great Flood of 2014. 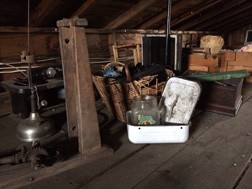 Kathy Vail, whose Red Geranium shop was the most recent occupant of the Toft House, kindly left behind a grouping of Emma’s things she’d arranged at the turn of the stairway leading to the second floor – an old telephone, an antique oak rocking chair and a 1927 calendar. “I love finding all these things,” Peil says. “It makes Emma seem endearing.”

The display case by the library door will contain items from Emma’s attic for a while longer. Toft House will be open to the public from 10 am to 4 pm, beginning May 15.