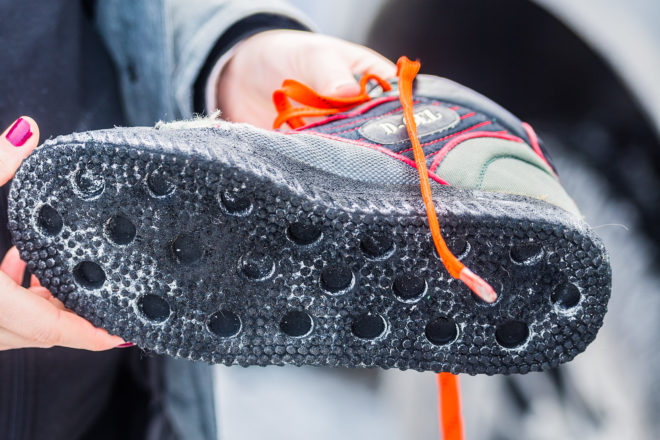 The bottom of a broomball shoe features dozens of rubber fingers to help grip the ice. Photo by Len Villano.

Broomball has been a passion of Northern Door winter athletes for nearly two decades, but to those who’ve never played the game begs many questions.

This week we set out to answer some of these questions with a breakdown of the broomballer’s basic uniform – the pads and layers that keep players warm on the ice and the quirky shoes and sticks that define the game. 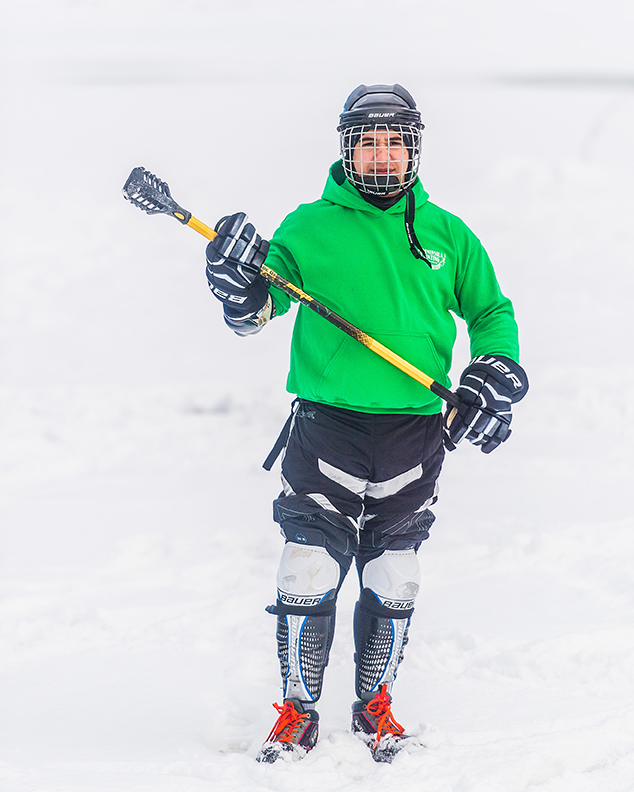 No, broomball isn’t played on skates. It would make much more sense if it was. In the league’s first seasons many played in tennis shoes, and creative players pounded nails through the soles or glued gravel or sandpaper to the bottoms for added traction.

Then they figured out there were special shoes just for the game. Broomball shoes have sponge-like bottoms with dozens of rubber fingers that allow for greater traction. You still can’t cut or stop on a dime, but they provide much more stability than tennis shoes, which can leave you flailing in place. 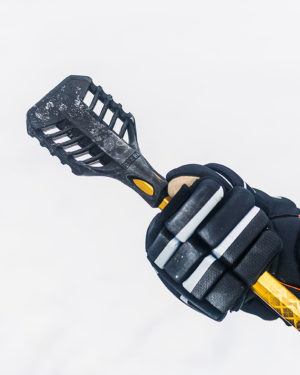 Broomball, despite the name, is not played with a broom.

In the early days of the league, nearly all players wielded a heavy, wood-handled stick with a broom-shaped rubber end. Nobody knew any better, until people started buying lightweight aluminum sticks and started rocketing wrist shots all over the place in the blink of an eye.

Early on, smart players figured out that you could cut a notch off the end of the “broom” to provide more surface area on contact, and more control. Now manufacturers make the stick that way out of the shop. Passing is best with the paddle face, while your shot on goal is much faster and more effective when making contact with the edge of the broom. 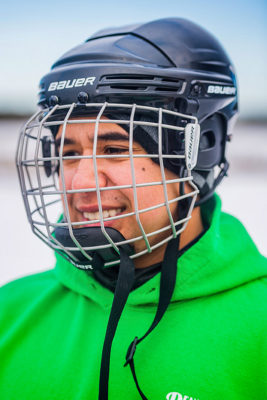 There was a time when few players wore a helmet with a facemask, including yours truly. But after taking one stick to the gum-line in 2000, I converted to the “always facemask” club without regret, as did many others. I had four teeth popped out that night, resulting in a $2,500 dental bill. A little vision impairment was more than worth the trade-off for safe teeth. 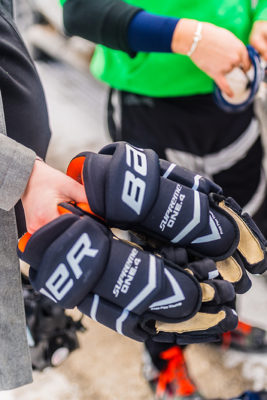 There’s no checking in broomball (at least not since Mike Cole, Mike Kahr and Slade Martin stopped playing) so shoulder pads and girdles aren’t needed. There are places you’ll want cushion, however, if you hope to be able to perform even simple tasks for the next week.

Knee pads are absolutely necessary because ice is hard and you will fall. Many players opt for shin guards to absorb flailing sticks as well. You’ll also find that dropping to your knees to cut off an angle, stop a shot or make a pass can provide tactical advantage. Some find it easier to pass accurately from the ground than standing up.

If you’re the type to dive often, elbow pads are a must as well. And while you can play with regular running or winter gloves, you’ll probably end up unable to type or grip a hammer for a couple days after taking a stick or ball to the hand. Hockey gloves, which offer padding and dexterity, are the way to go.

Though a couple trips up and down the ice will warm you up even when the temperature drops to 0, you still want to layer up to be comfortable and safe on the ice. A good base layer top and bottom, thick socks (or two pairs) are a good idea. Running tights, windpants or snowpants will work as the top layer. (It was once not uncommon to see players in jeans.)