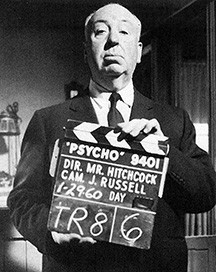 It all began with Ed Gein.

The people of 1957 were horrified to hear the story of the 51-year-old Plainfield, Wisconsin, bachelor who robbed graves, killed at least two women and possibly his own brother, fashioned a female skin suit for himself, and probably cannibalized his victims.

His last victim, 58-year-old hardware store owner Bernice Worden was found by authorities, hanging nude, gutted and headless at Gein’s farm. Since it was deer hunting season, a deputy first thought her body was a deer carcass.

Just 40 miles away in Weyauwega, 40-year-old writer Robert Bloch lived with his wife and young daughter. He heard about the Gein case and got the idea to write a book based on “the notion that the man next door may be a monster, unsuspected even in the gossip-ridden microcosm of small-town life.”

Bloch called his new novel Psycho, and it was published by Simon & Schuster in 1959.

An anonymous buyer purchased film rights to the book for $9,500. Even though Bloch was at this point a well-established writer (not every pulp writer made his way to a publisher as prestigious as Simon & Schuster), this was his first Hollywood offer. After publisher and agent fees, Bloch ended up with $6,000 before taxes. He never received another cent for being the source of Psycho. Scriptwriter Joseph Stefano made three times that for his work on the script.

Made on a tight budget of $800,000 and financed by the director himself after Paramount, his home studio of record at the time, offered no financing, just a distribution deal that took 40 percent of the cut.

Hitchcock, who had just made the Cary Grant vehicle North By Northwest, was the most recognized director in America, largely through the television show Alfred Hitchcock Presents, which had been airing since 1955 (the best part of which was Hitchcock himself delivering biting intros and outros, all 359 of which were written by his ghostwriter, sitcom writer James B. Allardice).

Now 60, Hitchcock felt he had something to prove.

The movie begins with the great Bernard Herrmann’s frantic violins pulsating to the skittish linear title design of Saul Bass. If that title sequence doesn’t get your heart racing, you might be a psycho.

Herrmann’s brilliant musical device has since become standard fare in the horror and suspense genres, but we can only imagine what effect it had on 1960 moviegoers who were hearing it for the first time, although you certainly wish it was very much like the scene in the 2012 biopic Hitchcock, with Hitchcock listening from the lobby, and then conducting Herrmann’s score and the first audience’s reaction to the shower scene.

After the titles, Hitchcock gets specific, with a panorama of Phoenix, Arizona, on Friday, December the 11th, 2:43 pm. The voyeuristic camera zooms into a hotel room where we meet what must be the star of this movie, Janet Leigh, lying on a bed in a bra and slip, ample breasts pointing up at the shirtless torso of John Gavin standing beside the bed (one of Gavin’s online bios sums up his career with, “starred in such classic films as Psycho and was also U.S ambassador to Mexico under Ronald Reagan”).

“You never did eat your lunch, did you?” the as-yet faceless John Gavin says.

He joins her on the bed, they kiss, and grapple crosswise on the bed. She says she has to get back to work because the extended lunches frazzle her boss. Gavin suggests they laze around some more.

That’s the first shock – who else in 1960 shows women in bras on beds with half-clad men and the suggestion of just finished sex?

The answer is Alfred Hitchcock.

Suddenly we are in the middle of a romantic melodrama. They’re not just having dirty sex. They want to be married, but they don’t have the dough to do it. Gavin’s character begins to shape up as a loser with too much baggage – failed marriage, alimony and his late father’s debts.

Marion returns to work, where her boss is back after what appears to have been a three-martini lunch with a wealthy loudmouth. The other chatty female employee in the office is Patricia Hitchcock, daughter of Alfred and his longtime collaborator and wife, Alma Reville.

Herrmann keeps the tension high with his probing, surging, screeching violins as Marion Crane (Leigh) leaves Phoenix with $40,000 in stolen cash for California and a new life with her hardware store-owning boyfriend.

We are completely involved in her plight – her flight from Phoenix, the unfolding of events in the conversation in her head as she drives, the confrontation with the intimidating, sunglassed policeman, with Herrmann’s violins constantly driving her on.

Then the rain, the pounding rain! And the violins…and a dim light. The violins stop as the light becomes clear:

And then, 49 minutes into the movie, our star’s blood is famously running down the drain of the shower (they used chocolate syrup). What the? You can’t kill the star with a full hour still left of the film. Our star, Janet Leigh, is killed in the often imitated but never equaled shower scene, to such a masterful sequence, with Bernard Herrmann’s intense screaming violins. It shocked the sugar out of audiences, who had never seen anything like it from old Hollywood. There were reports of faintings and walk-outs, people grabbing each other, screaming.

A new day had dawned, and the old dog Alfred Hitchcock had pulled it off.

While Herrmann’s score is crucial, so is the close, tight and sharp cinematography of John L. Russell, who puts you in the scene to an almost claustrophobic degree. Russell had a long history shooting television and was director of photography on more than 100 episodes of Alfred Hitchcock Presents.

The shower sequence is recognized as masterful editing, but it is also incredible cinematography, particularly in the sequence showing the blood-tainted water spiraling down the drain in extreme closeup, to extreme closeup on Marion’s dead eye. The camera pulls back and we see her wrinkled brow and expression of surprise at being killed.

And then we move on to the rest of the story and its bizarre twists and turns that, again, are endlessly imitated. It also spawned several sequels with Anthony Perkins reprising his role as Norman Bates, and the supposedly shot-for-shot 1998 remake by Gus Van Sant (I normally like Van Sant’s work, but on this I can only ask why?), and a current TV series called Bates Motel.

One of my favorite tributes to Psycho is in Mel Brooks’ High Anxiety when frantic Bellboy Barry Levinson (future director of films such as Diner, The Natural and Rain Man) attempts to stab Brooks in the shower with a wet newspaper.

In its first year, Pscyho brought in $15 million domestically and $6 million from international distribution (this when the average movie ticket of the time cost 70 cents). Only Ben Hur made more money in 1960, but its budget was more than 15 times that of Psycho. 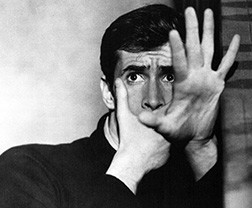 However, the critics found plenty of fault with the movie, which some speculated was a matter of ego because Hitchcock refused to allow advance press screenings.

“A blot on an honorable career,” wrote New York Times critic Bowsley Crowther. Dwight MacDonald wrote in Esquire that Psycho is “a reflection of a most unpleasant mind, a mean, sly, sadistic little mind.” “One of the most vile and disgusting films ever made,” wrote another. “It is sad to see a really big man make a fool of himself,” wrote a British critic in the Daily Express in a story headlined “Murder in the Bathroom and Boredom in the Stalls.”

Many of those critics revised their opinions in later years as Hitchcock’s movie quickly entered the fabric of American culture. In 1992, the U.S. Library of Congress deemed the film “culturally, historically, or aesthetically significant” and selected it for preservation in the National Film Registry, and it ranks No. 18 in the American Film Institute’s list of 100 Greatest American Movies.

If you are thinking of celebrating this 55th anniversary of the release of Psycho with a viewing, consider a double feature with the great 2012 biopic Hitchcock, about the making of Psycho.