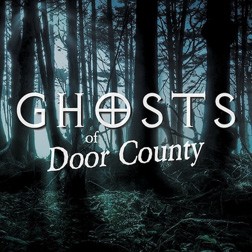 Director Marc Stevens warns those going to see Ghosts of Door County, which has its theatrical debut at Sturgeon Bay Cinema on Oct. 25 and runs there through Halloween, that they will not be seeing the sort of overdramatized ghost hunting presented on certain TV shows.

Back when the project began in 2006, Stevens had his own video production company in Green Bay. He had seen a student-produced film about the Southern Wisconsin Paranormal Research Group and was intrigued.

“I thought it would be great to do something with these guys,” he said. “I found the subject interesting, but also, years ago I had lived in a house that most people considered haunted. We had a lot of episodes in that house that led me to believe there was definitely something strange going on. I experienced things. My roommate experienced strange things. Friends would come over and experience them. It really struck me as, OK, what’s happening here. I don’t really believe in spooky ghost, but what causes things like this to happen? When I got to understand the investigators, I got turned onto the science behind it and the investigative qualities.”

Members of the paranormal group were interested in Stevens’ idea of a film about their investigations, but the next step was to decide where to conduct the investigation.

“I thought, what would make it interesting?” he said. “Having lived in the area, I knew a lot about Door County and always loved it. I got married on Washington Island. I spent a lot of time on the island. It’s kind of our hideout to go and get away from everything. I knew the area was steeped in history. I thought Door County would be more of a sellable product. There were some real opportunities for marketing this.” 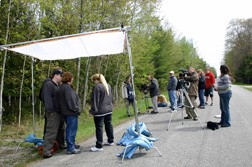 The crew of ‘Ghosts of Door County’ films on Washington Island.

With Door County now in mind, Stevens collaborated with Bethany Rucinski, who was the writer of the student film he had seen on the paranormal group, to find 10 locations to investigate.

“It was a case of going online and looking at books like Weird Wisconsin and Haunted Wisconsin and finding some of what they said were haunted locations,” Stevens said. “But also based on my experience being up there, I knew about Bitters Pub and Shipwrecked and some of the other folks up there with stories.”

Stevens didn’t want to give too much away, preferring instead that you see the film, but he did say there were some surprises along the way.

“One of them was that so much of it is legend,” he said. “It really says a lot about the history and lore of Door County and the legends that get started. One of the quotes in the movie is, ‘Those legends have to come from somewhere.’ The stories reflect a lot of the history and culture. It wasn’t so much about the spooky, scary things as it was about the people and the area.

“Some of the other surprises were finding definite evidence where we thought we were wasting our time,” he said. “I won’t reveal details, but one of them was a cemetery. All of the ghost hunters said, ‘We never get any results in a cemetery. It’s cliché. It’s dumb.’ We got our best results of the entire film there. It was really a cool experience.

“Another one was outside on a beautiful day. We come to this location on the shore of the bay. You wouldn’t have thought haunting in any type of way, yet there it was. The results were there, a lot of evidence that something was going on. It just wasn’t where you expected it to be.”

But most importantly, Stevens says, viewers will see that the members of the Southern Wisconsin Paranormal Research Group are serious investigators.

“These folks, the quote unquote ghost hunters, aren’t really about hunting ghosts. They call themselves paranormal investigators. If there is evidence of strange things happening, it is what it is. You have to ask the question, ‘Why is this happening?’ To chalk it up to ghosts immediately is premature. These folks honestly don’t believe in ghosts. They believe there is something going on that we don’t fully understand. To jump to the conclusion of ghosts to them is kind of silly.”

Ghosts of Door County runs at Sturgeon Bay Cinema Oct. 25 – 31. You can also purchase the DVD at ghostsofdoorcounty.com.