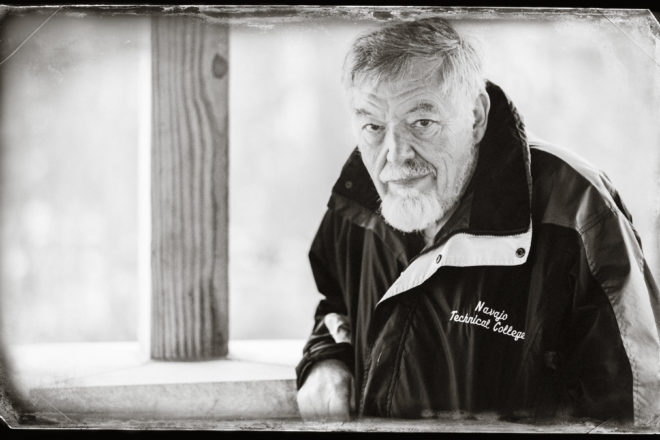 While researching another project at the Wisconsin Historical Society’s archives in Madison, writer and educator Thomas Davis came across “hints in the historical record” of a black fishing community that had set up in West Harbor on Washington Island in the 1850s. From these historical hints, Davis created a 310-page novel that fills in the gaps left by history.

In the Unsettled Homeland of Dreams is historical fiction that follows the story of Tom Bennett, also referred to as Preacher Bennett: a black preacher living in West Harbor. In the novel, he leads escaped slaves from Missouri to freedom on Washington Island via the underground railroad. The novel addresses the fact that this community existed and also provides an answer to its mysterious disappearance.

In the Unsettled Homeland of Dreams took a circuitous path to becoming a novel. After initially coming across a reference to the black fishing community, Davis didn’t have any grand plans for a story, but it took up space in his brain.

When he retired from serving as provost at Navajo Technical University, Davis and his wife, Ethel Mortenson Davis, moved to Sturgeon Bay.

“I was thinking I ought to write something about the local area,” Davis said, and he subsequently wrote a sonnet about the black fishing community. And that was his original concept – to write a series of sonnets – until he went into Fair Isle Books during a trip to Washington Island.

“I asked the owner, Deb Wayman, about literature on Door County and the black community, and she said that we really need a book on the black fisherman community. She said, ‘Why don’t you do one?’ And I went home and asked Ethel, and she said I ought to write that book.”

Davis then turned his attention from sonnets to nonfiction. He spent time researching at the Door County Library’s archives in Sturgeon Bay, the UW-Green Bay archives, the archives in Madison and the Washington Island Archives, which has an extensive collection of primary source materials. Through his research, Davis found some limited material on that black community, but not enough to write a full-fledged historical account.

“I could have written something on the times,” Davis said, “but it seemed like it was cheating. So I decided to just write a novel.”

The novel is fiction, but it’s based on some truths. Bennett was a real person, for example: a preacher and a veteran of the War of 1812.

“Tom Bennett presumably was a sailor at the Battle of Put-in-Bay in the War of 1812, so that’s where I started,” said Davis. “I did undergraduate work in history and did read WPA slave narratives and the literature from the underground railroad, and did some work in the scholarly literature. Mostly I know how to research pretty well.”

The novel took more than two years to complete. One year alone was spent on research.

“At one point I got stuck,” Davis said, “and Ethel finally got after me. She’s a good writer, and she helped me after it laid foul at least six months. I couldn’t seem to grab the strands together.”

With the nudge from Ethel, Davis was able to finish the novel, but it wasn’t an enthusiastic finish.

“I wasn’t sure, but after I’ve seen it in print – finally – I think I like it. It really reads well out loud. It seems to have a pretty good rhythm. I like the sound of language; that’s important to me.”

From sonnets to nonfiction to historical fiction, it took a determined writer – and researcher – to adapt the project to tell this story. In addition to writing the novel, Davis did write sonnets: one to start every chapter.

In In the Unsettled Homeland of Dreams, Davis leaves readers with this takeaway: Our history hasn’t been – and won’t be – fully uncovered, but that doesn’t mean the story can’t be told.

In the Unsettled Homeland of Dreams is available at Fair Isle Books, 1885 Detroit Harbor Road on Washington Island; and at Novel Bay Booksellers, 44 N. 3rd Ave. in Sturgeon Bay.