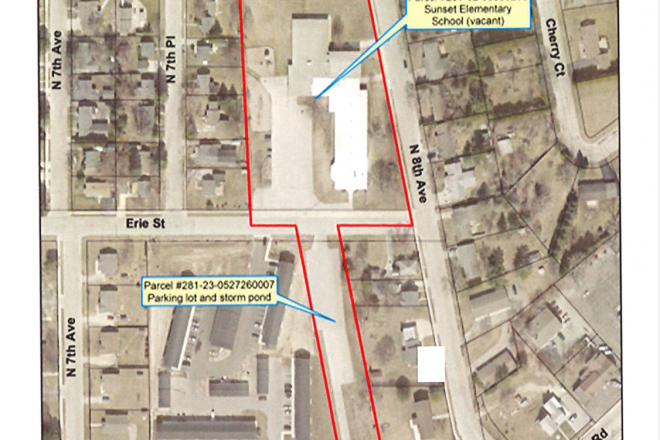 The red line shows the boundary of what would be Tax Incremental District (TID) #5 within the City of Sturgeon Bay. Two different residential apartment buildings with a total of 36 units between them have been proposed for the area: one at the former Sunset School property, the other in the parking lot across the street. The TID would help the city finance incentives to the developers, public improvements and fix-up grants for the property owners. Source: City of Sturgeon Bay.

The state legislature created Tax Incremental Financing Districts in 1974, and since then, the City of Sturgeon Bay has created four of them. The city is now working on creating a fifth to provide development incentives to encourage and promote residential development at the Sunset School property.

TIDs funnel all property taxes from new development to the municipality instead of splitting tax collections with the other taxing jurisdictions – Door County, NWTC and the Sturgeon Bay School District in this case. The city then uses the gains in property taxes to retroactively pay for debt or incentives borrowed or paid to encourage development.

“It’s one of the few tools cities have to promote economic development,” Olejniczak said.

In the past, Plan Commission Chair and Sturgeon Bay Mayor David Ward has stated that he’s not a fan of TIDs. During the Aug. 18 Sturgeon Bay Plan Commission meeting where the commissioners recommended approval of TID #5, Ward offered a reassuring status check on the city’s existing TIDs.

TID #5 would cover the 2.76-acre Sunset School property that abuts Delaware Street, North 8th Avenue and Erie Street, as well as the 0.81-acre parking lot across Erie Street. S.C. Swiderski is planning a 26-unit apartment complex on the former school property, and Doreen Phillips of Maritime Heights is planning a 10-unit townhome complex on the 0.81-acre parking lot.

The city has agreed to pay Swiderski to demolish the school building and also pay the developer approximately $200,200 for construction costs, or $7,700 for each of the 26 units constructed. That project is expected to be completed by the end of 2023.

The city’s contribution to Phillips for the 10-unit townhome across Erie Street would be approximately $15,000 for housing-construction costs if the units require a sprinkler system for fire protection. That project is expected to be completed by the end of 2022.

The two housing developments are expected to add $3.9 million in land and improvement values by the end of 2023. The base value of the existing land and improvements is zero. A cash-flow analysis shows the difference between the base and projected values will generate $1.94 million in tax increments for the city.

The city also anticipates making public improvements worth $975,316 to the TID neighborhood. That includes new sidewalks on Erie and Florida streets, and road improvements for Delaware and Erie streets.

Another $150,000 would be reserved for property owners within a one-block radius of the TID who would be eligible for low- or no-interest loans or grants for minor repairs and upgrades such as roof repairs, painting or window replacements.

“We did that with TID #3,” Olejniczak said during the Sturgeon Bay Plan Commission’s Aug. 18 meeting. “We gave some money for fix-up grants for roofs, driveways, and that went over well. That helps maintain the property values of the TID itself.”

Because the Sunset School playground equipment will be removed, the city has also reserved $100,000 to replace that equipment at a location to be determined.

“We’ll take some of this money and put in a playground at another location within walking distance,” said plan commission member and Common Council Alder Helen Bacon during the Aug. 18 plan commission meeting.

The documents supporting the creation of the TID determined that the tax revenue the TID would generate over its legal life of 20 years would cover the costs of the public improvements and the city’s contributions to the developers. By 2042, the final year of revenue collection, the documents project the TID would have repaid all expenses and end with a surplus balance of nearly $1 million. The cash-flow analysis shows the positive balance doesn’t begin to happen until 2034.

Because the costs are lower for this TID and some of the expenses will happen after increment is generated, Olejniczak said the city will likely pay the incentives and improvements with a combination of cash, revenue from the property tax generated, and a state trust-fund loan.

Joint Review Board Must Approve TID

The plan commission recommended approval of TID #5 on Aug. 18, but it’s still a month away from finalization.

The JRB has the authority to approve or deny the TID based on three criteria found in state law. A major criterion is considered the “but for” test, as in, “This development would not happen but for the financial support of the TID.” The JRB also reviews the TID’s performance annually.

The JRB’s first meeting was Aug. 17, followed by the Sturgeon Bay Plan Commission’s Aug. 18 public hearing, when that body also recommended adopting the TID. It will now go to the Common Council Sept. 7, with the JRB scheduled to make a final decision Sept. 14.