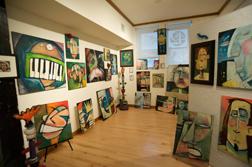 Mom says: Wipe that look right off your face. Young man, you have attitude written all over you. That expression is not becoming on a lady such as yourself, she says. You look just like your father with that look on your face. WIPE IT OFF.

Sure, mom might be just a little overwhelmed walking into Tim Nyberg’s Gallery 42 – the faces are everywhere, and so is the attitude. For most people, though, the expressions are intriguing and thought provoking. Some are reminiscent of teenage angst or childhood wonder. Many even inspire a little burst of laughter from their onlookers.

There are cartoonish faces, caricatures, baby faces, faces with birds, cups of coffee and dirty martinis (with two olives, please). There are abstract faces. There are faces that are reminiscent of Picasso and Modigliani.

“When he got back into painting there was a period where he was finding his own voice. I think the faces are part of that – faces of people he sees and the way he views his own painting at this particular snapshot,” Jake Nyberg, percussionist and son to Tim Nyberg, said. 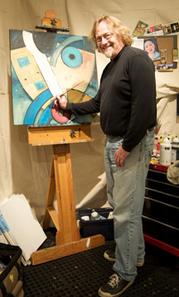 Tim Nyberg paints nothing ordinary or expected. There are abstractions, swirls, harsh angles and random bursts of color.

Nyberg said, “I like messing with convention. I always try to break the rules a little bit.”

Nyberg also organizes Art & Music Jams, a public event where he paints to live music. The music, frequently jazz, may include a variety of instruments: keyboard, accordion and/or percussion. Lee Tomboulian, jazz keyboard professor at Lawrence Music Conservatory, often plays alongside Nyberg. Tomboulian said that before starting, Nyberg might give a verbal direction for the music – a concept or idea to begin with – and then away they all go, playing and painting.

“It’s a performance art and a fun exercise. If it turns into a painting that’s great, and if it doesn’t it’s a basis for another painting,” Nyberg said.

Nyberg may paint by number, but his brush strokes are outside the lines. Much of Nyberg’s art has a compelling sadness to it – his paintings exploring the careful line between tragedy and comedy, Tomboulian said.

“If you can’t get some kind of emotional feeling off of art I don’t think it’s doing its job,” Nyberg said.

The Art & Music Jams often have surprising twists, turning both audience and artist expectations upside-down. They serve as a learning experience and an opportunity to test the boundaries of art. These sessions also yield some of the very unique and intriguing works that make up Nyberg’s “What’s with the faces?” exhibition.

“When I’m painting to the music I’m just throwing down the shapes and the colors of the rhythm, the notes…” Nyberg said, “it doesn’t necessarily make a finished piece until you keep turning [the canvas] and find out where the painting is.”

While the musician is used to playing for an audience, the painter does so rarely. It is a relatively uncommon experience to see an artist like Nyberg create a work of art in front of an audience in a single sitting. His flair for performance and comedic style (co-author of the “Duct Tape Books”) lend themselves well to this type of painting.

“The name of the game is risk taking and being willing to do something and then paint back over it,” said Jake Nyberg. “Over and over again you’ll see a painter – especially my dad – go back to a painting and work over it.”

The paintings can be abstract or literal interpretations of the music. Both the music and the painting play off of one another, sometimes leading the musician and artist into new and unfamiliar territory.

“If I’m doing something very abstract, it might bring out something equally abstract from him, but it won’t necessarily be a comfortable thing,” said Tomboulian. “We kind of feed off each other, and if I see him doing something that’s remotely musical – like using the stick part of the brush and scraping or spattering – I might be inspired by that suggestion.”

According to Nyberg, painting to jazz music adds an improvisational element, where other genres are often less flexible. A jazz musician has more freedom to play in response to what they see being painted, to riff off of a brush stroke. He’s also less likely to get too caught up in the lyrics.

“He’s vary playful, very whimsical – he’s not a serious painter. That is, he does have some paintings that are more serious – but his art is an unpredictable, playful, work-in-progress kind of art,” Jake Nyberg said.

Indeed, Tim Nyberg has been known to take paintings down off the wall in his gallery and paint over them when they no longer appeal to him.

“Painting over adds nice background. You can see the painting underneath showing through,” Nyberg said.

No matter which painting you are looking at, no matter what kind of emotion the work elicits – you can’t help but react to the faces that characterize Tim Nyberg’s upcoming exhibition. 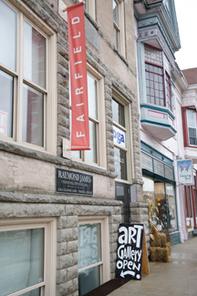 Some faces may draw you in, and some may repel you. Some may even make you want to smack that look right off the pretentious expression of a painting like, “fancy-man-at-art-opening.” Others may hit a little too close to home: the portrait of “red headed girl with braces and glasses,” a poignant reminder of the inherent awkwardness that is being a teenager.

“I think everything I do incorporates everything else that I do in some way. Humor, color, even the haphazard style of the paintings reflects the way that I live. I’m not the 9 to 5 same-job-for-life kind of guy. If something interests me I do it, if not, I’ll leave it,” Nyberg said.

Gallery 42, now located in the Fairfield Building downtown Sturgeon Bay, awaits it’s Grand Re-Opening on October 16, from 6 – 9 pm. Both Lee Tomboulian and Jake Nyberg will be playing during the re-opening celebration on October 16, though they will not be performing an Art & Music Jam. For more information, or to stay on the up and up with Art & Music Jams, visit http://www.galleryfortytwo.com. In the meantime, the gallery remains open to the public, and choc full of faces.