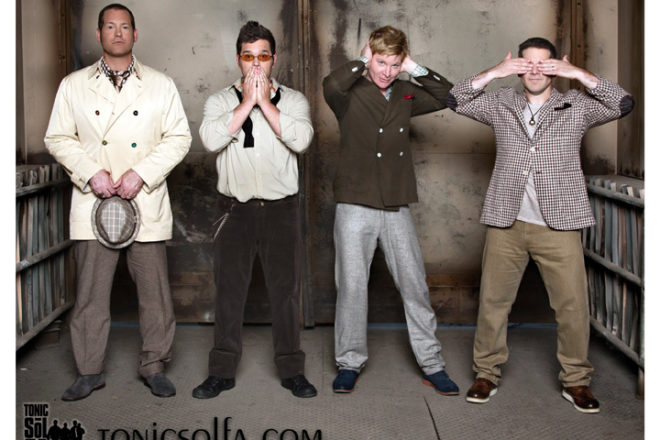 Although they are simply four voices and a tambourine, Tonic Sol-fa has spent considerable time on the road carving their niche as the nation’s top vocal group. In the midst of touring, this quartet has been named one of the top five “must see” groups in America, has been awarded numerous original song and album awards in pop, gospel and holiday genres, appeared on NBC’s Today Show and in the pages of Newsweek magazine. Outings with Jay Leno, Shawn Colvin, and Garrison Keillor have propelled album sales and have earned the group thousands of intensely loyal fans.

Tonic Sol-fa has been voted into the Midwest Music Hall of Fame and averaged more than 150 shows annually in 48 states. The quartet has also won their first Emmy Award in the “Musical Composition/Arrangement” category for a song performed in a Toys for Tots public service announcement.

The Peg Egan Center is located on Church Street in Egg Harbor, and all concerts are free and open to the public. In case of rain, concerts are held at the Calvary Methodist Church, 4650 Cty E, Egg Harbor. For more information call 920.493.5979.