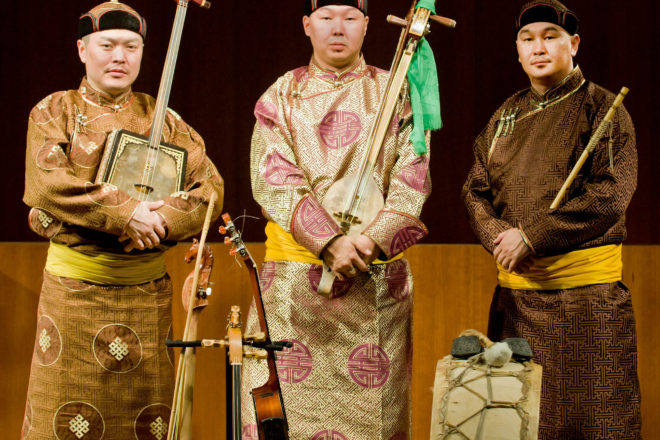 The Alash Tuvan Ensemble will bring an evening of traditional throat singing to the Door Community Auditorium this weekend.

Trying to find the Tuvan Republic on a map may prove difficult. It is a tiny republic just south of Siberia and bordering Mongolia. But out of this small central Asian state comes a grand musical tradition. Tuva is known for its ancient practice of throat singing, where one singer produces multiple pitches simultaneously.

“[Throat singing] is a big part of Tuvan music,” noted Sean Quirk, band manager for Alash Ensemble, a trio of Tuvan throat singers. “It’s vocal music where you turn the voice into an instrument … utilizing a natural process in the voice to create multiple melodious audible tones. It’s part of an overall musical style that is foreign to our ears, but that is interesting and intriguing as well.”

The effect has been compared to that of a bagpipe, where an ever-present fundamental pitch is sung at a low drone while the melody whistles over it. Trained from a young age, Tuvan throat singers start with a low drone and then manipulate their vocal tract to amplify the overtones found in the fundamental frequency.

Throat singing (xöömei in Tuvan) was traditionally done outdoors, as the singers’ voices are meant to mimic and interact with the sounds of the natural world. For example, the sygyt style is high-pitched with a sharp whistling sound above the fundamental pitch. This is meant to evoke birdsong or a summer breeze. The borbangnadyr style is low-pitched with both a deep undertone and higher overtones, like the sound of howling winter winds on the steppe.

Those who are intrigued by this vocal tradition and want to learn more should check out the 1999 Oscar-nominated documentary Genghis Blues, which follows American bluesman Paul Pena as he discovers and learns the art of throat singing. (You can see the cultural musical exchange as Pena and throat singer Kongar-ol Ondar perform in a concert clip from the film on YouTube.)

“It’s really rare for people to get an opportunity to see it live,” Quirk remarked. “I found over the last 10 years [of working with the ensemble] it really catches people in a nice place. People come out glowing because there’s something really deep and rooted about it that is common to all of humanity, because the art is such an old one.”

Door County residents and visitors alike will have the chance to experience this ethereal sound, as the Alash Ensemble will perform at the Door Community Auditorium (DCA) on Sept. 11. The trio of musicians who make up the ensemble – Bady-Dorzhu Ondar, Ayan-ool Sam and Ayan Shirizhik – have won numerous international awards in throat singing and have collaborated with the classical Chamber Music Society of Lincoln Center, beatboxer Shodekeh, and the bluegrass/fusion/jazz band Béla Fleck and the Flecktones.

Cari Lewis, executive director at DCA, stated, “I’ve been trying to book a throat singing group for over a decade. I’m thrilled that the stars aligned and we were able to get a date with this ensemble.”

Alash Ensemble will perform at DCA at 7pm on Sunday, Sept. 11 as well as performing matinees and workshops for Door County students on Sept. 12. Tickets for Sunday night’s concert range from $18 to $38. A limited number of $10 tickets are available for students. Advance reservations are recommended and can be made through the DCA box office, located at 3926 Highway 42 in Fish Creek. The box office is open Monday – Friday, 12 – 5 pm. Tickets can be purchased in person, on the phone at 920.868.2728, or online at dcauditorium.org.