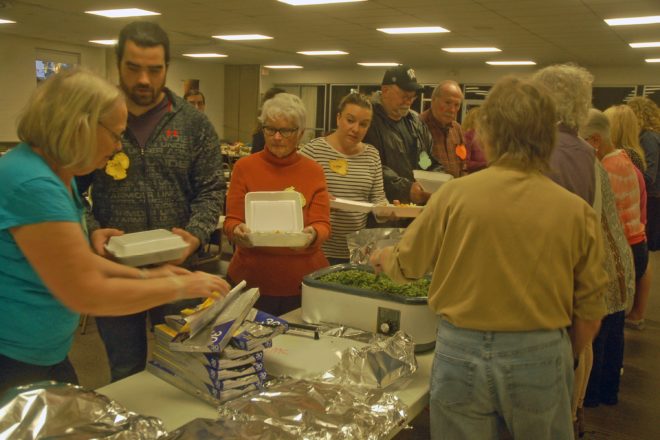 The serving line was busy as volunteers filled trays to be delivered to shut-ins throughout Sturgeon Bay.

“What’s amazing is the community of people who volunteer,” said Leslie Youngsteadt, who with her husband Duane, both former educators, has organized the community dinner since 2009. “It’s probably the most heartwarming project my husband and I have ever worked on. We really love this project.”

She said they always prepare to serve about 300 meals. 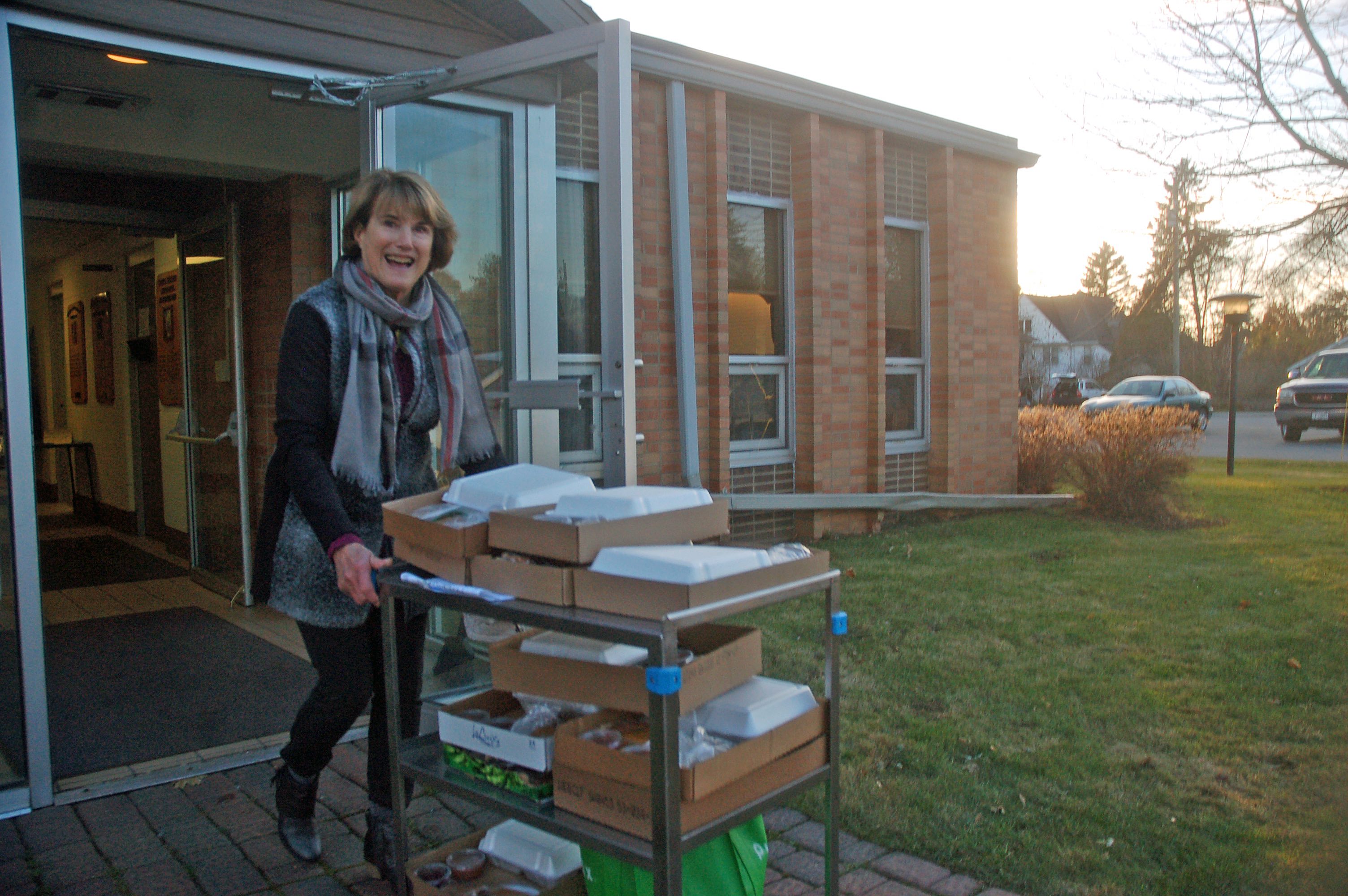 “We set the dining room for 160 and always figure we’ll get another 150-plus for home deliveries,” she said.

This year’s dinner set a record for 360 meals served – with 190 carryouts and home deliveries to shut-ins, and the rest served at the church after all the deliveries were made. Last year 356 meals were served.

“It’s just a nice thing to do for Thanksgiving,” said Christina Johnson, who has volunteered for years at the annual dinner but was delivering for the first time this year with her son, Leeland Hubers, her boyfriend, Eric Barrera, and his daughter, Chloe Cook, a student at Luxemburg-Casco High School who was able to count her Thanksgiving duty as part of community service required by her school.

It’s a monumental task to put on such a large dinner, but on the day of the dinner, it seems to take on a life of its own as all the preparations come together.

“It takes a whole team and a whole community to put on this meal,” Leslie said. “We’re organizers but we certainly couldn’t do it without all the volunteers and community sponsors.”

She said the community sponsors have remained pretty much the same throughout the years.

The work begins in October with a fundraising letter.

“We take our donation letters and go to the donors that have sponsored us, pretty much the same sponsors every year,” Leslie said. “Some sponsor with money, others with food. We also have what I call anonymous donors, people from our church who really have a heart for this project but don’t want their names mentioned. We have a nice budget for this project.”

They pick up the turkeys the week before Thanksgiving. This year they had 11 turkeys, until the Monday before the holiday a man walked into the church and told the sad story of having two turkeys that were going to be roasted for a family gathering, but the family’s oven died. So he asked if he could donate the two turkeys, and his family would come for carryout meals.

“We tried to convince him to put his turkeys in the freezer and save them until he got his new stove, but he said no, he wanted to donate them,” Leslie said.

In addition to the 13 turkeys, they also had 150 pounds of potatoes, 60 pounds of green beans, 13 gallons of donated squash processed and cooked by a parishioner, a large batch of cranberry relish, and an assortment of pies and quick breads, including gluten-free pumpkin pie. 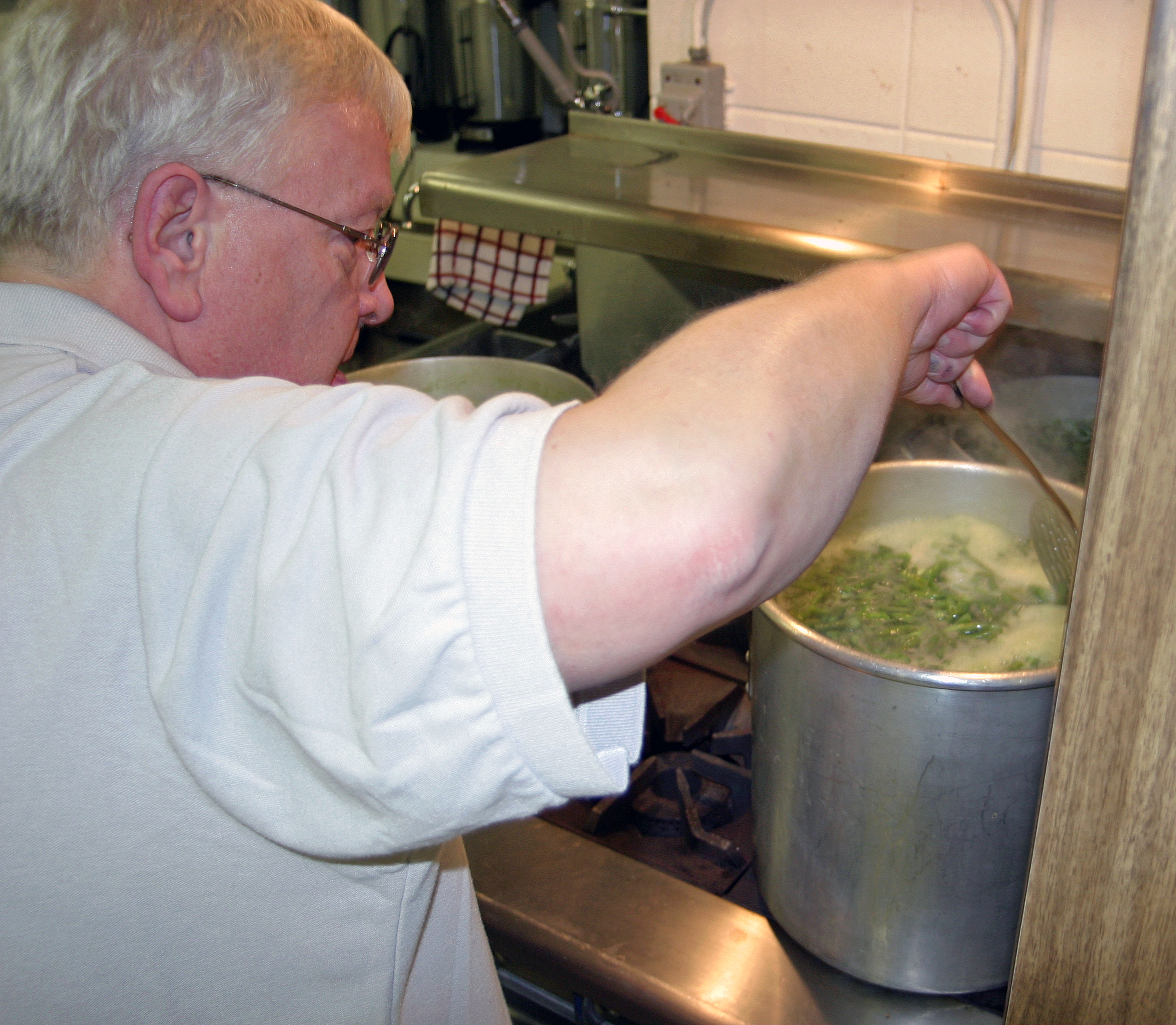 Eddie Evenson was in charge of cooking the 60 pounds of green beans.

Leslie believes the idea for the Thanksgiving dinner began in 1979 for church members who were going to be alone.

“And it just kind of grew,” Leslie said. “Other people heard about it and said, ‘Hey, can we come?’ The church said, why don’t we do it for the community.”

Emma Barnard was the original organizer of the event, and Leslie believes they are still using Emma’s cranberry relish recipe.

“She was an older lady who got to the point where she couldn’t do it anymore,” Leslie said. For the next quarter of a century, June Peterson organized the Thanksgiving dinner, but by 2008 she was looking for someone else to take over.

“My husband and I always loved the Thanksgiving dinner and wished we could work here, but always had this big family group coming,” Leslie said. “I had an elderly father living in Sturgeon Bay and his birthday was Nov. 26, which sometimes was Thanksgiving. They all came up and celebrated grandpa’s birthday. He passed away in 2006, and in 2007 they all told us they weren’t coming. Rather than have hurt feelings, we decided to start volunteering here. We volunteered in 2007 and in 2008 June had said she couldn’t do it anymore. We asked if we worked with her, could she teach us what needed to be done? That year all she needed to do was tell us what to do and we would do all the work. She said yes because she loved this project. She made out all these lists and we did everything under her supervision. In 2009 she stepped back and we took it over as far as organizing.”

The one concern the Youngsteadts have is whether anyone will be willing to step into their shoes to coordinate the event when they can no longer do it.

“We hope it will be a tradition that will stay,” Leslie said. “Obviously, Duane and I won’t be able to do it forever. I’ll be very sad if there’s no one to step up and fill our shoes someday. If anyone is interested in learning how to do it…”