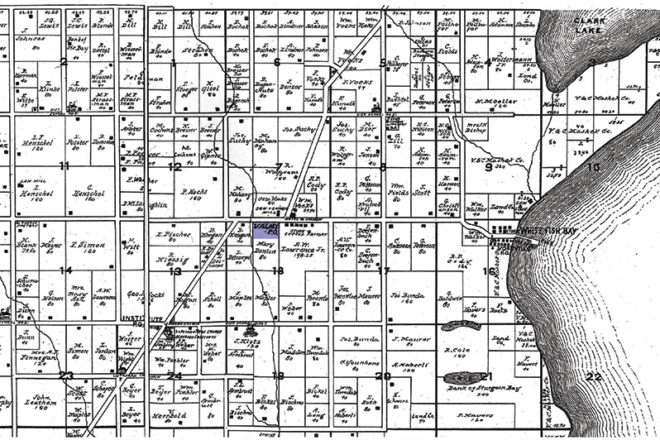 This image from the 1899 Illustrated Atlas of Door County shows the commercial corner (highlighted) where the Valmy Post Office operated from 1899 until it burned down in a cheese plant fire in 1903.

History can be a very murky thing. Sometimes as you try to unlock a mystery of the past, you find instead a frustrating lack of detail.

For example, how did the chunk of property just right of center on a Sevastopol plat map come to be known as Valmy back in 1899? Just try finding a historical record on the subject.

After scouring scores of old newspapers, here is an educated guess about the story of how Valmy got its name.

The one certain thing known in this story is that the area took on a name because the U.S. Post Office Department (which became the United States Postal Service in 1971) granted the right to have a post office there in 1899.

Historically, postmasters were given the opportunity to name the post office, subject to approval by the Post Office Dept. Now you would think that an entity such as the federal government would have very complete records of this naming process, however, you would be wrong. A statement on the USPS website says, “The sources of some Post Office names are lost to history; there are no federal records on name origins.”

However, there is an April 9, 1894, order from Postmaster-General W. S. Bissell that does help:  “To remove a cause of annoyance to the Department and injury to the Postal Service in the selection of names for newly-established post offices, it is hereby ordered, that from this date only short names or names of one word will be accepted. There may be exceptions when the name selected is historical, or has become local by long usage, but the Department reserves the right in such cases to make the exception or not as it sees proper. Names of post offices will only be changed for reasons satisfactory to the Department.”

From here we’ll have to rely on newspaper accounts.

The July 29, 1899, Advocate reported:  “A post office has been established near Voeks corner, with Mrs. Dr. H. R. Simon as postmistress. The office has been christened ‘Volney.’”

Voeks corner is where the business establishments in Valmy are today on Highway 57. At the time, William Voeks was operating a cheese factory and store, in which the post office was located, and Otto Voeks had a sawmill across the street.

Postmistress Simon was the wife of Dr. Simon, who, during his time in Door County, had offices in Ephraim and Sturgeon Bay.

The very next week the Advocate of Aug. 5 ran this correction:  “The new post office has been christened ‘Valmy’ and not ‘Volney’ as published heretofore. The names have the same sound when transmitted by ’phone it is difficult to distinguish which is which.”

OK, that’s just bad reporting. Why not ask, why that name? What does it mean? Who came up with it?

This is where the speculation begins. Although his wife is cited as the postmistress, later news items indicate that Dr. Simon also had a hand in operating the post office and store.

The good doctor might have been a student of military history or perhaps he was an admirer of revolutions, choosing the name of the French city where the untested leaders and troops of the French Revolution fought and won their first battle and stopped the advance of superior Prussian troops (superior in numbers and experience), whose goal it was to invade Paris and restore the French monarchy.

The day after that French victory, on Sept. 21, 1792, the French monarchy was declared abolished and the First French Republic was proclaimed.

Johann Wolfgang von Goethe was one of the soldiers in the Prussian Army and after the battle attempted to console his dejected comrades by saying, “Here and today, a new epoch in the history of the world has begun, and you can boast you were present at its birth.”

Just 14 months after the Simons started the post office, Dr. Simon said the work was too much and he turned over the duties to cheesemaker John Bunda in October 1900, who made cheese in the plant and also worked the post office until late summer of 1903 when fire destroyed the cheese plant and the post office. And that was the end of a post office in Valmy. The 300 customers who reportedly used that branch post office now had to travel to Institute for their postal needs.

But the name stuck.