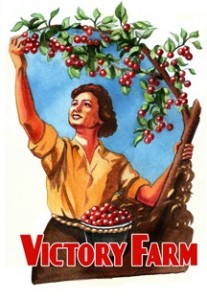 The American Folklore Theatre (AFT) announced their 2012 season. The summer season will feature Victory Farm, in rotating repertory with AFT favorites Belgians In Heaven and Cheeseheads, The Musical.

The Fall Season will feature Cheeseheads, The Musical at the Door Community Auditorium and And If Elected at the Gibraltar Town Hall.

This year’s world premiere, Victory Farm, is a story of “family, forgiveness, and the fruits of our labor” set in World War II Door County. The music is being created by award-winning composer James Valcq, who is best known for the worldwide success of The Spitfire Grill written with AFT co-founder, Fred Alley. The book and lyrics for Victory Farm were conceived and written by the up-and-coming writing team of Emilie Coulson and Katie Dahl.

In addition, AFT’s longest-running musical comedy, Belgians in Heaven, will return for its ninth season. The play is set in Southern Door County’s Belgian-American farming district.

Also this season, Cheeseheads, The Musical will not only be reprised on the summer stage but will also make its debut on the Door Community Auditorium indoor stage this fall. The play revolves around the lives of fellow workers at Schnaybel’s Famous Cheese, a family-owned factory set in Sheboygan, Wis.

AFT will spice up election season with And If Elected. Compiled by David Peterson, Fred Alley, and Jeffrey Herbst, And If Elected takes a lighthearted, often satirical, and occasionally poignant look at the complete history of the presidential election.

Tickets for both the summer and fall season will go on sale April 16 in the AFT box office at the Green Gables shops in north Ephraim, via phone at 920.854.6117, and online at http://www.FolkloreTheatre.com.