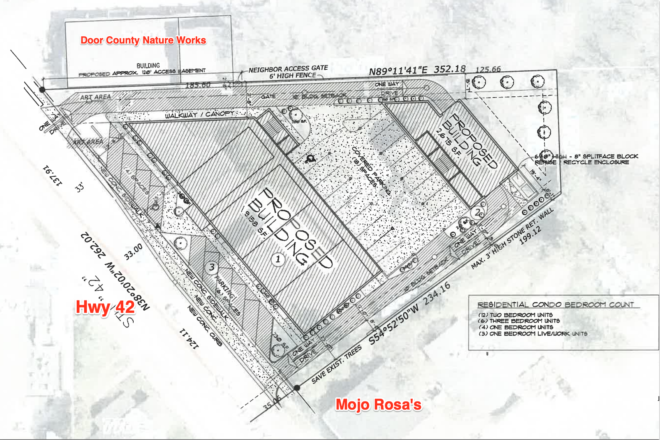 The Village of Egg Harbor will review a proposal for a 27-unit condominium development during a March 11 public hearing. The hearing will begin at noon at the Kress Pavilion.

The Residences at Egg Harbor would be located on the site of what is now Mueller’s Mini-Mart, across the street from Shipwrecked Brew Pub. The location has been a gas and service station for much of the last century.

Though the proposal received a largely positive reception from the plan commission in January, residents have since raised many questions about the project’s size and scope. At 46,481 square feet, it is more than double the 18,000 square feet allowed by code.

Developers are also seeking exceptions to the 35-foot height limit to build a rooftop patio with access for people with disabilities, as well as an exception to the limit on impervious surfaces. The plan would have 81.3 percent of the lot as impervious surface, while zoning code allows only 60 percent.

By putting parking below grade and on the first floor beneath the building, the developers said they will be providing better stormwater management than exists on the site today.

At the January meeting, developer Mike Schwantes of Creative Business Services outlined a project that would include what he called “work/live” retail units of 1,566 to 1,621 square feet on the first floor, and a mix of one-, two- and three-bedroom condominiums on the upper floors, ranging in price from $200,000 to $800,000. It would also include underground parking and a rooftop viewing deck.

Schwantes proposed a construction schedule that would take place during the summer, including blasting for three weeks in August. Karen Peterson, who owns Maxwell House, said that has scared many neighbors.

“It makes me nervous, and I think it makes a lot of people nervous,” she said.

Kim Jensen, who owns Mojo Rosa’s, next door to the property, said she likes the proposal and is not as concerned about the blasting.

“The concerns with blasting – they’ve explained that better,” she said. “They have the insurance in case it damages neighboring properties.”

The Village of Sister Bay bans major construction work in its downtown core from July through Fall Festival in mid-October to avoid disruption during the peak season.

Peterson said the concept of residences and commercial downtown is good, but the plan has too many holes.

“The density of it is just crazy,” she said. “There’s so much packed into a very small space. It isn’t like they’re going over on one condition. It’s most of them – parking, no landscaping, the height requirement. In theory, the concept is good, with residences downtown and commercial on the bottom,” she said, “but beyond that it goes off the rails.”

Jensen said the development could present opportunities for the village to create public restrooms and paths.

“I think it will be great for the middle of town,” she said. “I think there’s some area for this to force the village and this developer to do some things we need.”