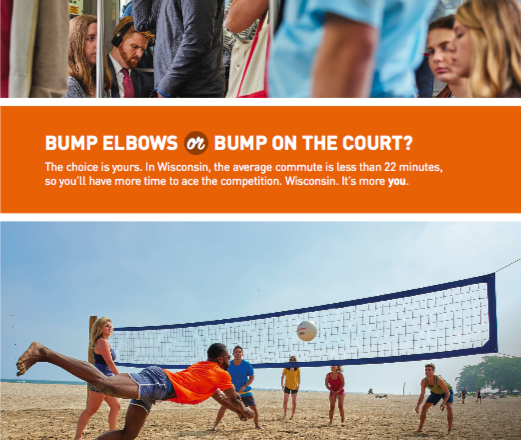 Chicagoans would be excused for thinking this is a picture of one of the scores of volleyball courts on its lakefront.

The much-hyped campaign from the Wisconsin Economic Development Corporation (WEDC) to attract millenials from Chicago to move to Wisconsin to work is falling flat in the city. It’s no surprise, considering it insults the lifestyles loved by the people it targets.

Daniel Kay Hertz, a senior policy analyst at the Chicago-based Center for Tax and Budget Accountability, noticed one in the subway Jan. 22. The ad juxtaposed a train passenger with a group of fun-loving millenials on a boat in Wisconsin. Hertz tweeted out a picture of the ad with a question:  “Did someone forget to tell Wisconsin that Chicago is literally on a giant body of water?” he wrote.

That sparked a thread of responses, none of them kind to the campaign.

“I know wakeboarding is sweet or whatever, but public transportation is more important to my life and that’s not available on a large scale in Wisconsin,” wrote Casey Toner.

“This ad campaign is so strange. They are all over my gym in print and radio. I’m all ‘you don’t know me!’” wrote another Chicagoan.

In Crain’s Chicago Business, Aaron Renn summed up the campaign thusly:  “Unfortunately, Wisconsin officials are attempting to compete against Chicago where Chicago is actually pretty strong,” he wrote.

Gov. Scott Walker has been pushing the campaign as a key initiative to attract young people to the state.

Walker touted the effort at a stop at Gibraltar High School Jan. 11, when he implored the students to follow their dreams and venture far and wide in their educational paths, but to remember Wisconsin is here for them when they’re ready to settle down. It’s a good message, and a necessary one, but the state would be better served by providing the services young workers crave rather than mocking the places they go to find them.

Chicago’s entire lakefront, all 19 miles of it, is public, with beautiful beaches, paddle boarding, kayaking, and multi-modal trails. The city has invested more than $100 million in bike trails and lanes in recent years, including a Chicago River flyover exclusive to bicyclists and pedestrians, and the 606 Trail, a converted rail line that has driven west side property values through the roof.

Many of the ads attempt to portray train and bus rides as a hellish commute. In this attempt Walker and the firm behind the ads are missing a crucial point – millennials love public transit.

A 2016 survey of millenials by the Urban Land Institute showed that 80 percent ranked access to public transit “very important” in deciding where to live.

Millennials aren’t the only ones. Apartments, condos and homes near trains are far more expensive than those a few blocks away. Corporations seeking the best workers are moving from the suburbs to the city center and routing access to the El trains.

Time on the train is time to read, work, catch up on emails or call mom. Chef Paul Virant once told me that his train ride from his home in the suburbs to his restaurant, then located near the lake, was some of his best-used time of the day, when he could exchange texts with local growers about what was being harvested and plan his menu accordingly.

Public transit means you don’t need to own a car, drive drunk, and pay for insurance, parking fees, or gas for years. Instead, you can buy a couple flights to warmer weekend climates.

Officials from the Wisconsin Economic Development Corporation said the campaign is aimed at educating people who don’t understand everything Wisconsin has to offer. It’s a great goal, because it’s true that those without ties to the state have no clue about its amenities until they set foot here. Unfortunately, the execution is laughable.

The saddest part is that Wisconsin could right now be selling the very things millenials value. In 2010 the state was poised to build a high-speed rail line between Madison, Milwaukee and Chicago with $810 million in federal funds. That train might have been the best marketing campaign to move young adults into the state in decades, and could have made it viable for workers to earn Chicago salaries while taking advantage of Wisconsin’s much lower cost of living (and much shorter weekend drives to Door County).

But Walker rejected the the rail line and the federal funds because Wisconsin would be on the hook for an estimated $7 million in annual operating costs. The line was never built, the Milwaukee manufacturer of rail cars for the line took its 150 jobs and left the state, and Wisconsin lost the more than $50 million it had already spent on the project.

Now, after the $1 million initial investment in the campaign in Chicago, Walker wants the legislature to approve funding to expand it to other Midwestern cities. The total cost? About $7 million.