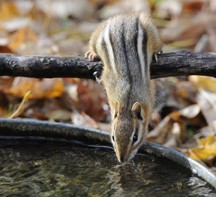 One can only wonder in disbelief over the millions and millions of native creatures, from small to large, that have perished during the fires in the West and the severe droughts in vast parts of the United States. Many small water holes, ponds, marshes, streams and rivers have dried up leaving the wild creatures struggling to find water. Some of the larger animals, and especially birds having the power of flight, can travel somewhat to locate sources of water, but the small creatures simply cannot survive without water.

This morning Charlotte and I had parked in a large blistery hot black-topped parking lot when suddenly we noticed two large dragonflies, joined in their mating ritual, hovering above two very shiny dark cars parked next to us. Every second or so they would dip downward and the female, being behind and lower than the male, would touch her abdomen to the top of one of the cars, surely assuming it was the shiny surface of water in which she had to deposit her eggs. Had any of her eggs actually been dropped onto a car they surely would have fried instantly!

Later today as we sat eating our noon lunch, temperature at 95 degrees F, we were thrilled to watch three baby Baltimore Orioles bathe in the largest of the baths placed upon the ground. At first the dripping of water from above spooked them away temporarily, but they soon overcame that slight disturbance and quickly returned to splash merrily together for several minutes.

Having observed the birdbaths fairly regularly we often know what to expect at certain times of the day. Invariably it’s the Robins, star bathers, that are the first to arrive for their morning “showers.” Obviously they bathe but also splash so much water in all directions that we’ve often seen smaller birds really take shower baths as they stood on the ground near the edge of the 20-inch diameter pans. 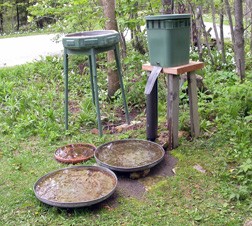 These four baths supply our wildlife with drinking water and bathing space.

Near dusk is when we can expect the Indigo Buntings to arrive at the baths, and usually just before dark is the Hermit Thrush’s time for cool relief. Charlotte has had an on-going attraction to and fondness for these dainty little thrushes and keeps track of their arrival times from day to day.

Several months ago we had to have a new dish and the properly-attached apparatus for our computer installed on our roof and, much to our pleasure, the old one wasn’t usable anymore. With a little improvising the old 28-inch-wide dish has become our brand-new, most-popular birdbath. What’s so ideal about the device is the very gradual taper of the total depression that easily enables the small birds to use the outer areas while the big birds, such as the Robins and Blue Jays head for the middle.

One of our favorite birds to watch bathe is the usually very shy Gray Catbird. One time it cautiously approached the bath as a Robin vigorously splashed water in all directions and a Red Squirrel patiently waited for its turn to drink, not to bathe. As soon as the coast was clear, in went the catbird unhesitatingly. Every time it dunked its head and lifted its tail upward the sun lighted its rusty-colored undertail coverts to perfection. Soon the bird was hunkered down in the water with its entire tail submerged. In about a half minute its bath was completed and away it flew to find a perch, shake the water out of its plumage and to preen. 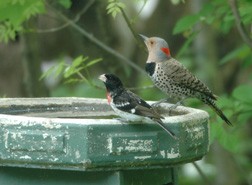 Usually when birds are thirsty they get along well together at the baths.

Ordinarily the woodpeckers aren’t frequent bathers although they drink often. Recently, perhaps due to the high temperatures, they have been bathing quite often, especially the Downies, Hairies, Red-bellies and the Common Flickers. Even though we’ve seen the Pileated Woodpeckers bathe several times, they do not make frequent use of the water to bathe but drink frequently.

One of the more unusual birds we’ve seen bathe was the Cooper’s Hawk, unfortunately never when a camera was handy, and a number of wild mammals come regularly to drink, including the Gray and the Red Squirrels, Chipmunk, Cottontail, Raccoon, Opossum, and Deer. One of my most memorable drinking and bathing sightings of a wild creature involved a large Western Fox Snake.

I had been seeing a large Fox Snake over a period of several years near our house and strongly suspect it was the same one. What a thrill it was to discover it drinking at the birdbath on my way back from the garden one night after supper. Gradually I snapped black and white pictures as I eased closer to the snake. What amazed me was how thirstily it gulped the water, as though it had no bottom. Then it brought most of its length, excluding its head, into the water and simply soaked there for a while. 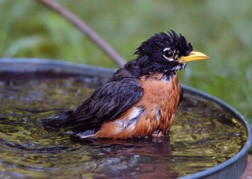 Bathing helps the Robins clean and rearrange their feathers, but also helps rid them of parasites.

Finally I got within about three feet of it and it slithered out of the water over to the edge of the driveway. There it coiled in the grass, vibrated its tail much like a rattlesnake and lunged out at me repeatedly. The swishing sound of its scaled skin, rubbing as the snake attacked me, was quite fascinating. Actually this snake has no built-in rattles as does a rattlesnake but rather strikes its tail against surrounding stiff grass and twigs to make the noise.

We place great importance in cleaning and refilling our four birdbaths daily. Personal experience has indicated that the baths are used much more if several are on the ground and especially if there is a slow steady trickle or dripping of water into one of them.

Please put out water for the wild animals in your yard. Their survival is critical to the natural world, and someone up there will like you!