After years of work by citizen groups, committees and the town board a segment of Waters End Road became the first Heritage Road in Liberty Grove.

“We now have a program and we now have a road, and I hope in the next few months more roads will be nominated,” said Mike Bahrke, highway committee member and former heritage roads subcommittee chair. 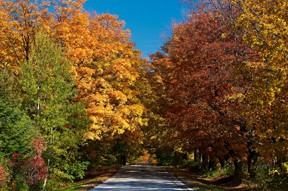 A segment of Water’s End Road in Liberty Grove is the town’s first Heritage Road. “There are things that we have here that are part of our community that we’d like to keep the way they are and we’d like to promote,” said Mike Bahrke, highway committee member.

The town’s Heritage Road Program was officially created in August 2012, but it’s not a new concept in the northern community. Citizens have long rallied for special recognition of certain roads to protect them from becoming run-of-the-mill, straight and treeless.

“Heritage Roads really was a response, a way of getting the town to hold back on cutting back the trees on the edge of the road,” said Lou Covotsos, Liberty Grove Town Board Supervisor. “It became institutionalized as the Heritage Roads Program, which seeks to identify some unique geographic, cultural or historic culture of roads and preserve them.”

Covotsos said road controversies in Liberty Grove will always boil down to one thing – tree canopies. Many people believe brushing, or cutting vegetation growing near the road, isn’t delicate enough to preserve canopies so they pushed for special road maintenance on Heritage Roads.

But the board decided not to adopt a special road maintenance policy for Heritage Roads. Instead, they passed a set of guidelines to consider for construction and maintenance on those roads.

The existing road maintenance policy already leaves room for those guidelines, said town board chairman John Lowry, so passing an extra policy was unnecessary and could mean spending more money on road improvements.

“Some things might not [have] allowed us to improve a road to a state that it should be improved to,” Lowry said.

In the same meeting the town board passed the Heritage Road maintenance guidelines, they also voted not to accept nominations for new Heritage Roads if the roads were scheduled for major construction.

Those who focus on tree canopies disagree with the board’s decision.

“After the improvements are done there might be little left of that road – the character could be gone – to nominate it for Heritage Road status,” Bahrke said

For now, Heritage Road controversies in Liberty Grove seem to be subsiding. One road has been designated, and more have been nominated and could be on their way toward recognition and preservation.

“There are things that we have here that are part of our community that we’d like to keep the way they are and we’d like to promote,” Bahrke said.