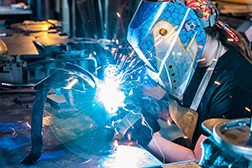 Bailie Benson works on her handmade steel helmet in the welding studio of Hands On Art Studio.

Bailie Benson has attended more than 12 Renaissance festivals, but she’s still unable to contain her enthusiasm for the upcoming Door County Renaissance and Fantasy Faire.

“It’s an absolute blast and the atmosphere is amazing, and all the people are awesome,” Benson said. “It’s fun to see different things that you wouldn’t normally see everyday. And you get to dress up.”

For Bailie, “dress up” means more than donning a ribbon and flower crown, the overpriced accessory of choice for many fairgoers. This year she will arrive in a handmade steel helmet, of her own design.

Bailie had no welding experience before beginning her summer job at the Hands On Art Studio in Fish Creek, but in the weeks leading up to the festival, has been welding late into the night to finish her armor in time for the festival.

Hands On owner Cy Turnbladh taught Bailie how to weld. On her first try, Bailie drew a straight line across a piece of scrap metal. “Cy made me do it again to make sure that it wasn’t a mistake,” she said, “And then I did it again.”

Bailie now works in the metal studio exclusively, and welds all the stands that Hands On creates for its gallery fused glass line.

When I met Bailie, who (full disclosure) is my roommate, and heard about her natural gift for welding, I requested a lesson. I was fairly confident that I too could pull a four-inch line across a piece of scrap metal. When I pulled down my helmet, I encountered my first challenge.

“I can’t see anything,” I told Bailie. 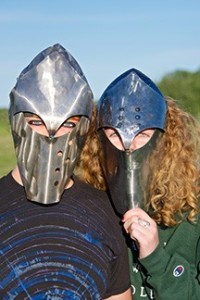 I did not get used to the blindness.

“Cy calls that a chicken scratch weld,” Bailie said, pointing at my work.

The chicken scratches occur when the person welding doesn’t have enough nerve to keep the welder touching the metal.

Bailie, who is 22, studied Tuba Performance and Fine Art at the University of South Dakota for three years before transferring to William Penn University in Iowa to study education. Bailie’s interest in Renaissance festivals led her to the Belegarth Medieval Combat Society, an offshoot of Live Action Role-play, or LARP.

Belegarthians are organized geographically in Realms, and realms are divided into Teams, which practice weekly. Their armor, and heavily padded weapons are subject to inspection before every Battle. Bailey is the leader of her Realm, called the Southern Eryie.

“It’s as close as you can get to real medieval combat, without live weapons on the field,” Bailie said. “You don’t pull any blows. You hit your opponent at full force.”

In the metal studio, Bailie wears tie-dyed bell-bottom jeans, a leather apron, and a cap with dragons, but she prefers the simple tunic, cloak, and fighting boots that she wears on the battlefield (in the Belegarthian rulebook, tunics are required, and jeans and sneakers are prohibited).

Bailie’s helmet and greaves, which she designed, will be ready in time for the Renaissance Faire. The greaves are large steel shin guards that wrap around the lower legs, and are tied with a leather cord.

The helmet is comprised of sheets of triangular steel that she cuts using a plasma torch. Bailie fondly calls the torch, one of her favorite tools, “the little dragon.” The triangular steel is bent and then welded to a central curved strip of metal, which fits over the head. Complete, the helmet’s shape resembles an armadillo’s armor.

Bailie’s armor will be finished and battle ready by the end of the summer.