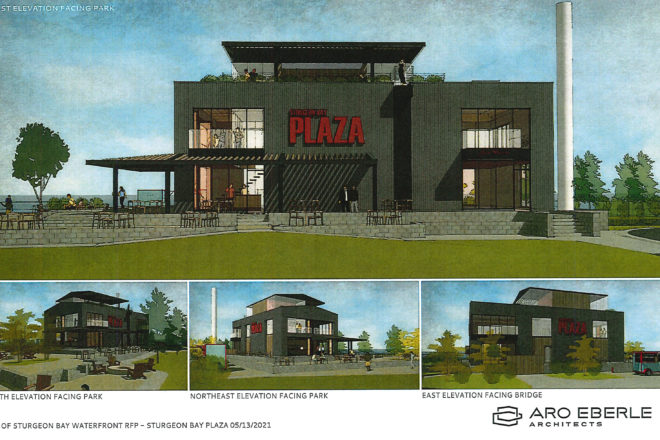 Renderings of the development that’s in the planning stages on a city-owned parcel of land, shown on the site-location map as development lot B. Source: City of Sturgeon Bay.

An oddly shaped quarter-acre of land abutting the base of the Oregon Street bridge on Sturgeon Bay’s West Waterfront may house a two-story gathering space with a seasonal, rooftop garden.

The City of Sturgeon Bay agreed Tuesday night to begin negotiating a development agreement with One Barrel Brewing Company owners Jennifer and Peter Gentry for what they’re calling the Sturgeon Bay Plaza.

Renderings for the 5,400-square-foot building show a seasonal, rooftop patio; a short-term-rental apartment; and a concessions/bar space on the second floor. Proposed for the first floor are a deli/restaurant tenant and a concessions/bar tenant with restrooms that would be open to the public during operating hours. The hardscape park infrastructure would include an area for food carts and firepits.

“The goal of our project is to activate and nurture a community-focused gathering space,” the Gentrys wrote in a letter to the City of Sturgeon Bay.

The Gentrys, doing business as WWP Development, outlined the incentives they want the city to provide in exchange for adding $1.7 million to $2.2 million to Sturgeon Bay’s tax rolls and directly creating 15 full-time jobs. The Gentrys want the city to sell the land parcel for $1 and transfer an environmentally clean site; pay up to $100,000 for all site-prep work to bring the footprint up to buildable standards; provide Tax Increment Funding of roughly $590,000; provide grants or other funds of up to $250,000; provide at least 40 parking stalls in the park adjacent to the development for public use, with additional parking to be added on Maple Street; provide all utilities to the property line, including storm sewer; provide landscaping, maintenance and lighting for parking, sidewalks and common areas; provide a 50-foot easement for the area in front of the building for the patio, seating and firepits, plus a permanent vision easement; and availability of a full retail liquor license.

WWP’s stated time frame was to close on the real estate by July 1 in order to have both tenants up and running by May 15, 2022. Footings and foundation work would begin in August of this year, with construction starting in September.

“Our hope would be to have the building enclosed by December so that the interior work could progress,” the Gentrys wrote.

The Sturgeon Bay Common Council approved the plan commission’s recommendation to work with WWP on the development plan.

That Tuesday-night direction came with a few comments about a pending parking issue at the West Waterfront, however, given all the new development that’s in the planning stages. Behind the proposed complex on a larger, city-owned parcel of land, a four-story, 53-unit apartment complex is in the planning stages. To the west, the granary project is unfolding.

Alder Gary Nault said the council should not allow Sawyer Park to become an overflow parking lot when it’s a launch lot with a ramp that’s getting increasing use.

“When launching gets to be difficult because there’s nowhere to park your vehicle, they’ll go somewhere else,” Nault said. “It should be strictly a launching ramp.”

“We’ll certainly be looking at that,” he said.