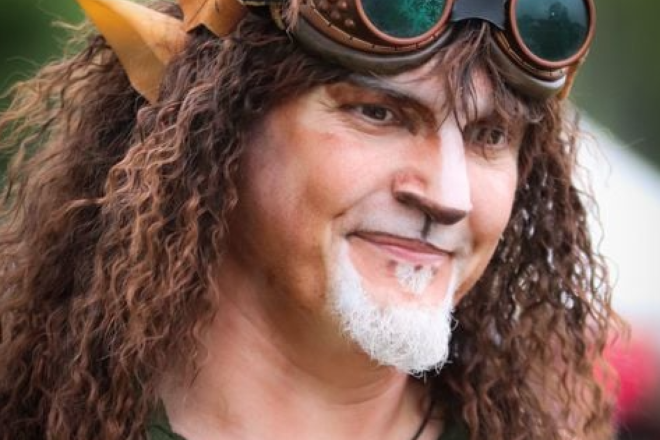 What do Theodore Roosevelt, Spiderman, Sir John Falstaff, Link from The Legend of Zelda and Thomas Edison have in common? All five will be in attendance at Kewaunee’s newest fantasy festival, Times of Future Past. It will bring together characters and fandoms from throughout time and space June 26-27, 10 am – 5 pm, at Kewaunee’s Winter Park, N3787 Ransom Moore Lane.

It was during a visit to the Masonic Temple in her hometown of Dubuque, Iowa, when Lynne Melssen came up with the idea for the Times of Future Past festival. The building featured a large entryway that led to a men’s and ladies’ salon, a billiard room, a movie theater and stage theater, a feast hall and more.

After discussing the idea with her husband – he suggested the festival’s name, which is a nod to the X-Men: Days of Future Past – Melssen produced the first festival in her home state.

Although the self-described history buff could have focused on her personal interest in the Renaissance period, she envisioned a place where characters from all over time and all fantasy universes could commingle.

Both Melssen and her business partner, April Roy, have a lot of experience when it comes to planning fantasy faires. Melssen organized The Dubuque Renaissance Faire for seven years and runs a traveling court called Have Court Will Travel, and the two met while they were working at the Door County Renaissance Faire. Roy’s business, Rose Sword and Thistle Productions, also focuses on creating immersive experiences for patrons, such as a Midwest Highland intensive that brings an expert on swords and Highland history directly from Scotland.

After Roy suggested that Melssen bring the time-travel festival back to the area, the two teamed up to create an LLC and make Times of Future Past a nonprofit organization.

“Lynne and I have been friends for many years,” Roy said, “and we are both passionate about history and everything faire/festival. She has so much experience with entertainment and thinks mostly in ‘event metrics,’ whereas I find a way to make things happen as cost effectively as possible” – skills that overlap and compliment each other “in the best ways,” she said.

And indeed, Melssen and Roy have joined their talents to create a fully immersive experience. Festivalgoers will be able to interact with Agent Peggy Carter, Teddy Roosevelt and Thomas Edison, among others. They can sign up for a suffragette tea party, learn how to play Quidditch with the Chicago Youth Quidditch group (something Roy is particularly excited about) and strut their stuff during a costume contest.

The Sturgeon Bay Knights of Columbus will be running the Old Knights Tavern, and many artisans will be selling their wares. In addition, the Desert Veterans of Wisconsin – whom this year’s festival benefits – will be at the festival serving food.

Visit futurepastfestival.com to get more details, see a full list of activities and purchase tickets.

photos courtesy of Times of Future Past