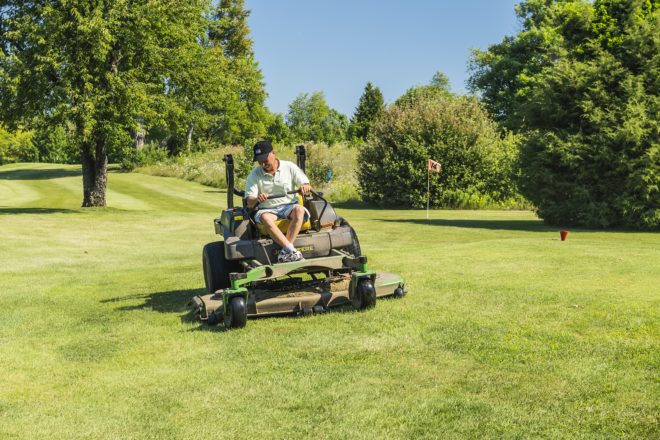 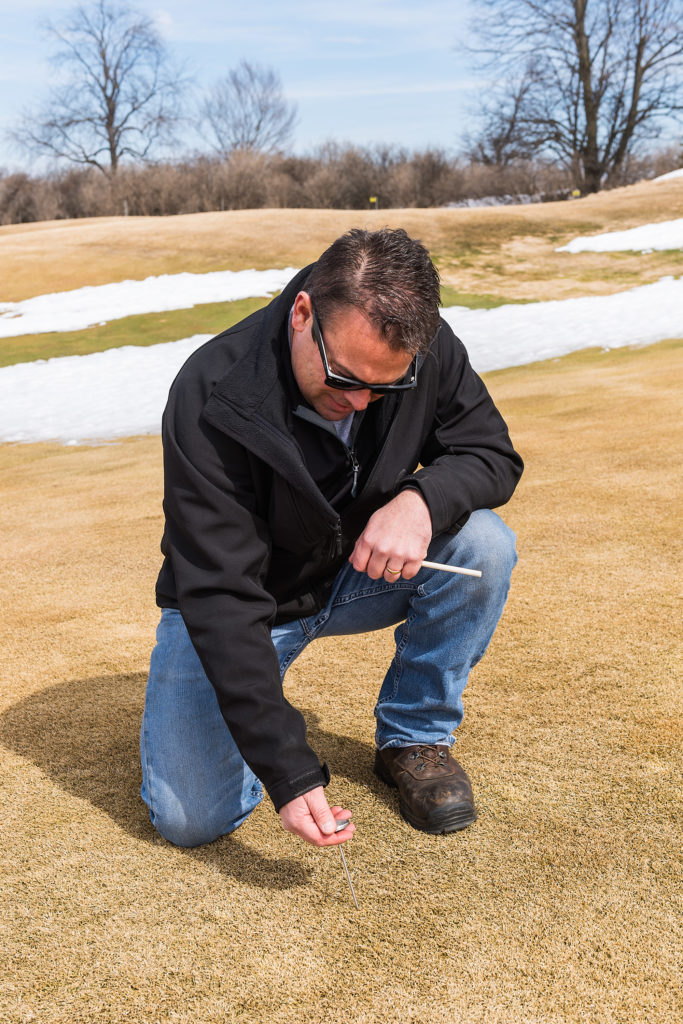 Think about the last time you played a round of golf in April. Maybe it has been so long that you can only remember the rounds you’ve played in May. Wisconsin winter will do that.

Now think about your drive to the golf course. You have a golf hat on your head, clubs in the trunk. Maybe you have new golf shoes or a brand new driver. You have to be smiling. I hope you’re smiling! That’s what the freshness of a new season and a warm spring day will do to you.

As you make this smiling drive, there’s an assumption you’re working under. The assumption is that the golf course you’re driving to will be there, patiently waiting, well groomed and ready for you to tee it up. Fair assumption? Sure. But it’s not like you were checking in during winter.

The brutal, inconsistent and maddening effects of the Wisconsin winter make life very difficult for golf course owners and operators, but only a select few are in charge of keeping things under control. That’s the case at Cherry Hills, the modest public track just north of Sturgeon Bay, and it’s also true of Horseshoe Bay, Door County’s only private golf club, located in Egg Harbor.

Both places enlist just three employees to manage the grounds in winter, but it would be a lie to say that work is just winter-related. The true work of prepping a golf course for the spring begins by putting the course to bed properly in the fall.

Courses in Door County generally shut down near the end of October. With no golf being played (and hopefully no significant snow yet), the maintenance team will continue business as usual, manicuring the course the way they would in August. One thing they’ll do is perform a final aeration of the course, punching holes into the ground to force air into the compacted soil. It’s part of what Brian Ferrie, superintendent at Horseshoe Bay, calls “healing,” and prepares the soil as much as possible for winter, when feet upon feet of snow and ice impede the movement of air into the soil.

Money is on their minds, too.

Money matters more than just income, wages and electricity bills. Money dictates what fungicides can be sprayed on a golf course to help it sustain the health it had at the end of a season. The better off a course is financially, the better product it can afford. The main goal? Keep snow mold from proliferating.

Snow mold is a fungus that destroys sections of turf during the cyclical winter process of freezing and thawing. Think back to this past winter, where a few balmy days depleted the snow in your front yard. That’s not ideal for golf courses, as that moisture will seep into the turf and not evaporate. Those water-heavy grass cells are damaged when temperatures drop and a refreeze occurs. Snow mold doesn’t discriminate on the course, either – greens, tees and fairways included – and it leaves behind white-, grey- or even pink-looking grass. Nothing near green, and nothing near healthy.

If this was southern Illinois, or maybe New York, where snow coverage is infrequent and lasts closer to 30 days instead of 60, Door County courses wouldn’t be as susceptible to such molds. But that’s the climate these courses live in, so the last stretch of winter, particularly the month of March, is where snow mold can cause trouble.

And so the guessing game persists for maintenance teams. Ferrie and his assistant will be as proactive as possible, even trudging out onto the frosty course to clear snow around drainage basins. It might be just 35 degrees, but the water cycle doesn’t have a winter off switch. Simply moving snow can force that moisture out into the open, where the sun aids the evaporation process. When Ferrie and his team are not tromping around on the grounds, there’s the more monotonous task of keeping the lawn mowers tuned up and ready. Nothing is worse than waiting all winter for your first day of mowing, only to have the equipment malfunction. 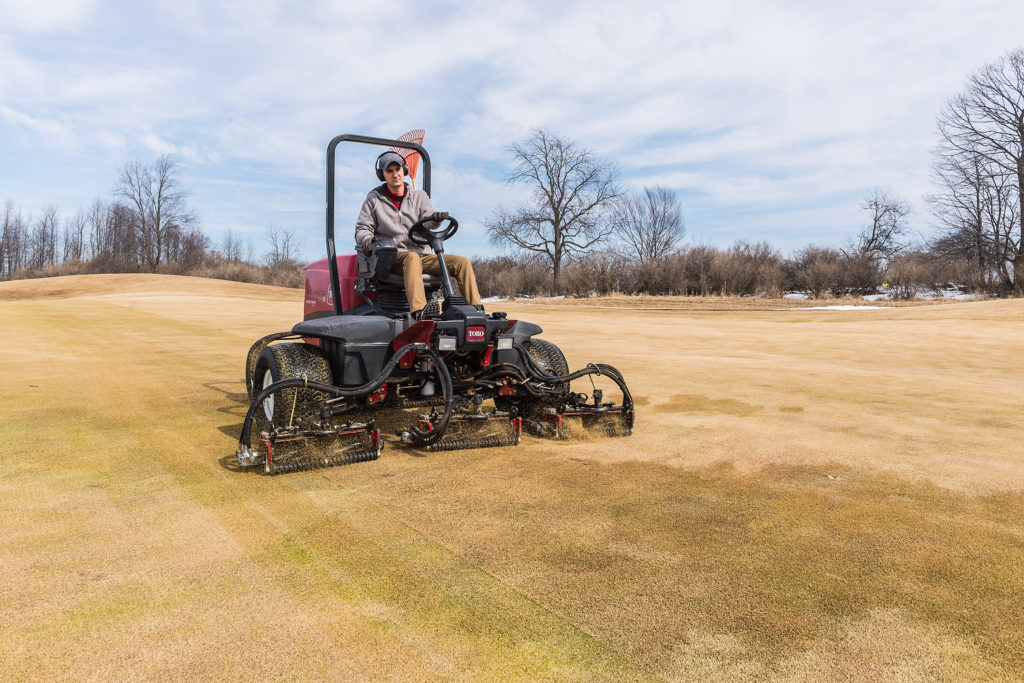 The waiting game leaves much to be desired in terms of activity during golf’s offseason, but even as warmer temperatures approach, it’s not all about cleaning up the mess that winter left behind. It’s also about preventive care against future summer issues.

Jon Martell, general manager who orchestrates the few-man band that is Cherry Hills, ran into some trouble with European chafer beetles in 2016. It was a problem that was more prevalent than ever across Door County in 2017, but his failure to apply insecticides to specific parts of Cherry Hills that spring led to an infestation in some of his fairways. The beetles feed on grass roots just beneath the surface, and as the food chain insists, birds, skunks, raccoons and other scavenging animals dig them up. They dig and dig and dig up the turf, not exactly what a golf course manager would prefer.

And so Martell learned a lesson in 2016:  apply specific insecticides in early March (and probably again in mid-summer) to keep his fairways grub-free. It’s just one of the many natural things he has to worry about across the plot of 127 acres. Dandelions are another. Around the end of February every year, Martell meets with Steve Wasser of Clesen PROturf, his turf application guru, to set a plan for the year. That plan includes applications to keep dandelions from growing rampant across the course. Martell wears many hats at the course, and one of them is sole application manager. When he forgot to apply the application his first year on the job, that weed showed up in full force.

In just 48 hours, by his measure, about 30 percent of the course was covered. It drove him crazy. Luckily, he was able to apply the application and kill off the weed, but it’s an instance that sticks with him years later. Most golfers might think about dandelions in June, but Martell and course operators need to think about dandelions in mid-March.

Not long after that, Mother Nature willing of course, they can start to think about your big smile walking through the front door.