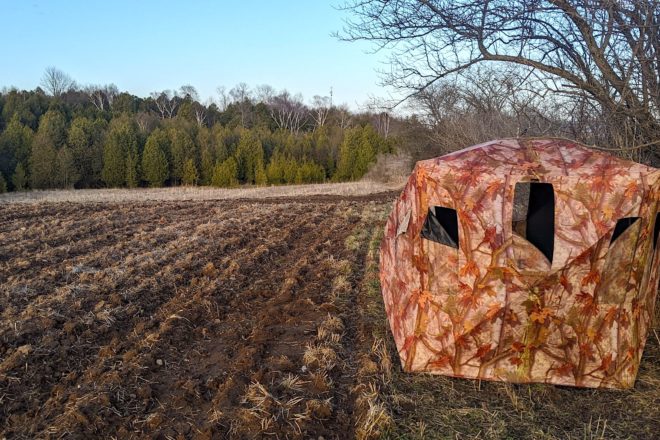 With the spring wild turkey hunt underway, pop-up blinds can be seen in fields and forests up and down the peninsula. The second of six seven-day hunting periods began Wednesday. Photo by Kevin Naze.

Wild Turkey Hunters Having a Blast

A cold, wet and windy spring has been less than idea for hunters pursuing wild turkeys, but most anglers aren’t complaining.

That’s because there’s been plenty of water in even the small lakeshore tributaries, extending the steelhead and sucker spawning runs. In addition, cool weather means a longer spring post-spawn bite for walleyes and northern pike.

Anglers casting or trolling spoons and stickbaits have been able to tie into pike and walleyes along the Kewaunee and Door County shorelines of Green Bay, and big brown trout have been active in northern peninsula harbors and bays.

Catch-and-release bass fishing has been slow so far. However, it should improve by the time the regular fishing opener rolls around May 7.

Most steelhead are done spawning now, but a few late-running fish are still on bedding sites. Others are resting up in deeper holes, snacking on whatever they can find before heading back to Lake Michigan.

Department of Natural Resources fisheries staff sorted through more than 2,000 steelhead at spawning sites on the Root and Kewaunee rivers this month. Staff collected more eggs than usual in an effort to raise and stock more of the colorful rainbows this fall and next spring.

On the hunting scene, gobblers and jakes are doing their thing as breeding heats up. Large groups split up recently, offering opportunities to hunters in areas that surround the winter hot spots.

The less-than-stellar weather has meant wearing extra layers afield, but it hasn’t hurt success for those who’ve scouted well since turkeys active from the time they fly down at dawn to the time they fly up to roost at dusk.

Many hunters choose to sit in enclosed blinds in areas where turkeys strut, feed or travel through. Others like to be more mobile, tucked into cedars or other heavy cover on field edges, forests or tree farms, and able to adjust position if the birds aren’t cooperating.

Some prefer to use staked turkey fans or decoys to sneak on birds hanging out for hours in open fields, but with full camo, lifelike decoys and calling, it’s not recommended if there’s a chance of anyone else hunting at the same time.

Southern and central Wisconsin birders have reported that colorful spring migrants such as Baltimore orioles, rose-breasted grosbeaks and ruby-throated hummingbirds have returned.

A warming trend, with south winds in the forecast, could bring those and other colorful visitors to backyard feeding stations in our area next weekend.

If you haven’t already done so, clean out your bluebird nesting boxes as some have already been seen.

To learn more about how to build the right nest boxes to attract the cavity nesting birds you most wish to attract, check this out: https://nestwatch.org/learn/all-about-birdhouses/features-of-a-good-birdhouse/.

Canada All In On Funding

The Canadian government has included full funding to implement the 1954 Convention on Great Lakes Fisheries, a treaty between the two nations. Under the treaty, Canada and the United States agree to fund the U.S. Great Lakes Fishery Commission consistent with a funding formula.

For several years, Canada had been underfunding the Commission, which has undermined Great Lakes science, cross-border cooperation, and control of the invasive, destructive sea lamprey.

In 1954, both nations agreed to a formula to fund the Commission’s work, which includes supporting science for fishery management decisions; helping the states, the Province of Ontario, and the tribes coordinate their myriad fishery management policies; and carrying out a sea lamprey control program.

Sea lampreys invaded the Great Lakes through shipping canals in the early 20th century and wreaked economic and ecological havoc. Each sea lamprey is estimated to kill up to 40 pounds of Great Lakes fish.

Thanks to the Commission’s programs, sea lamprey populations have been reduced by more than 90 percent.

Indigenous communities in British Columbia have hunted mountain caribou for centuries, but dwindling herds have meant that recent generations hardly see caribou and have never hunted them.

Now, two tribes have turned their focus on increasing the herd by killing some wolves.

Roland Wilson, chief of West Moberly First Nations, told National Geographic that in saving caribous, “we’re saving ourselves.” He added, “Culling wolves, that wasn’t something we wanted to do. But the wolf population was out of balance. There were too many. We understood that we had to decrease the population of wolves to protect the caribou.”

The herd has tripled in size the past eight years, but is yet too small for subsistence hunting.

The Sturgeon Bay Bass Tournament’s catch, weigh-on-the-water and release format will run on a Monday and Tuesday this year, May 9-10, four days ahead of the Cabela’s North American Bass Challenge’s Sturgeon Bay Open.

A list of all fishing tournaments that have applications in so far this year can be found at https://dnr.wisconsin.gov/topic/Fishing/tournaments.

Lake Michigan water levels are seven inches higher than they were a month ago, but down 10 inches from a year ago and two feet below the monthly record set in April, 2020. Levels are expected to rise about three inches by late May.