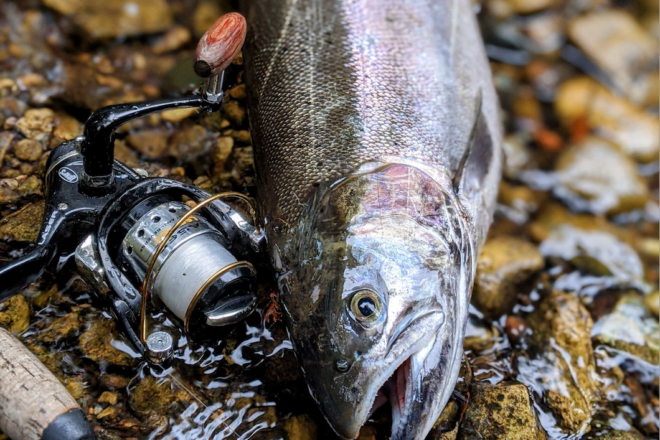 Lower-than-usual water levels so far this spring have hampered spawning runs of rainbow trout, which are often called “steelhead.” Steelheaders, and those targeting suckers and rainbow smelt, would welcome a significant rain event. Photo by Kevin Naze.

Deer hunters in Door and Kewaunee counties will again have ample opportunity to target whitetails this fall.

The Kewaunee County Deer Advisory Council (CDAC), which earlier this year voted to aim to maintain the herd at current levels, gave a preliminary recommendation to award four free antlerless deer tags with each bow, crossbow and firearm deer license again this season.

The Door CDAC, with a goal to decrease its herd, voted for three free antlerless tags – down from its state-leading five during recent years.

Both councils voted to go with the holiday gun deer hunt and extended bow and crossbow seasons.

Members of the public can weigh in during an online comment period April 12-25, with final objective-setting meetings set for early May.

During the Kewaunee County Zoom meeting, alternate chair Pete Mueller said he’s heard from a lot of hunters who would like to see fewer antlerless tags. He thought three might be a better number. Another member said he’d like to see no more than two given per license.

JJ Pagel made a recommendation to keep it at four free tags – a total of eight freebies if you hunt during both the bow and firearm seasons. All were in favor except the Deer Management Assistance Program representative.

Pritzl noted that very few hunters fill all of their tags. The average number of antlerless deer targeted and registered per hunter is zero to one per season. But the availability of extra tags for those who feel they have too many deer in their hunt areas may be an incentive to get them to target more whitetails, he said.

See the metrics by county that are used when considering season structures at dnr.wisconsin.gov/topic/Hunt/cdac. The online survey will be available April 12.

If you’ve been thinking about submitting a citizen resolution of statewide interest for the annual spring fish and wildlife hearings and Conservation Congress county meetings, keep the April 5 deadline in mind.

For the second straight year, the hearings will be online only, with no voting for local representation to the Conservation Congress, and terms will again be extended. If the current delegate no longer wishes to serve, the seat will become vacant, and the county chair can appoint someone.

In addition to citizen resolutions, there are 28 proposed changes related to fisheries and wildlife management, plus advisory questions from the DNR, Natural Resources Board and Conservation Congress. Members of the public can weigh in on those April 12-15. All votes are advisory only.

Take a closer look at all the questions, and find out how to craft and submit a resolution at dnr.wisconsin.gov/about/wcc/springhearing.

Tickets for the 33rd annual Baileys Harbor Brown Trout Tournament, set for April 15-17, are now on sale at $30 per angler.

In addition to credit card purchases at BaileysHarbor.com, tickets are available at the five weigh-in locations: B&K Bait and Tackle at Kap’s Marina on Washington Island, The Last Stop in Ellison Bay, Baileys 57 in Baileys Harbor, Howie’s Tackle & Archery in Sturgeon Bay, and Hooked Up Tackle Shop in Algoma.

More than $8,000 in cash and prizes will be split among the top 40 anglers. Tickets must be purchased before fishing, and all sales will end at the close of business April 15. Questions? Email [email protected] or call 920.839.2366.

New fishing and hunting licenses for the 2021-22 seasons are now required because last year’s licenses expired March 31. Get what you need in person wherever licenses are sold, or do it yourself at gowild.wi.gov.

All fifth-period leftover spring wild turkey hunting permits for Zone 2 sold out quickly, but as of earlier this week, there were still more than 1,000 left for the final week of May. Check what’s left throughout the state at dnr.wisconsin.gov/permits/springturkey.html.

The DNR has reopened in-person safety-education classes. The agency will enforce COVID-19 protocols, including social distancing and masking. See what’s available at dnr.wisconsin.gov/Education/OutdoorSkills/safetyEducation.

The 2021 Great Backyard Bird Count identified more than 6,400 species in 190 participating countries. More than 379,000 eBird checklists and 479,000-plus Merlin Bird IDs were submitted.

Check out the results at birdcount.org/2021-final-results.

As of March 26, Lake Michigan was 24 inches above its 100-year monthly average but a full foot below last year’s monthly record. Water levels were still up 54 inches from the record monthly low, set in 1964.