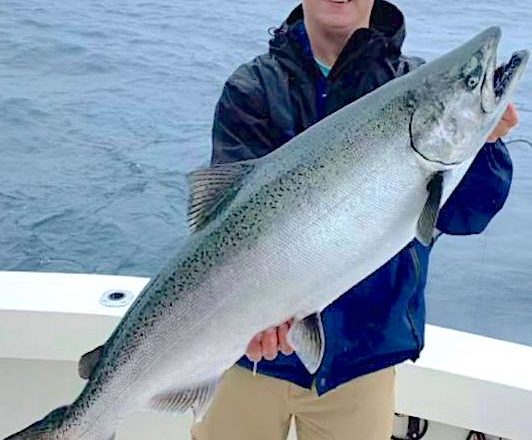 Right now, Chinook – or king – salmon, are the main attraction on Lake Michigan off Door and Kewaunee counties. This 26-pounder was reeled in on a foggy morning off Sturgeon Bay last weekend. Photo courtesy of Reel Impression Charters.

Six weeks into an explosive start to salmon and steelhead action on Lake Michigan, charter and private-boat anglers alike are hoping the winds of change won’t come anytime soon.

Although Wisconsin’s Big Pond trolling fishery has been amazing in 2021, it’s not the same story across the lake. An online check of Great Lakes fishing sites shows that many Michigan fishers are complaining about a much tougher bite.

Closer to home, from the northern tip of Door County on down to Algoma and Kewaunee, dozens of licensed charter boats have had catches of 10-20 fish – salmon, steelhead and an occasional lake trout – during a single outing.

At the southern end of the lake, coho salmon fishing has been very good for fish averaging three to six pounds, with occasional chinooks, rainbows, lakers and brown trout in the mix.

Numerous trophy-class Chinooks have been reported, including a 37-pound giant in Milwaukee, a 36-pounder in Algoma and plenty of specimens in the 25- to 30-plus-pound range up and down the Kewaunee/Door peninsula. In addition, some of the local monsters this season include a 33.7-pound lake trout, a 29-pound brown and a 20.5-pound rainbow.

All the heavyweights showing up on social media are causing a feeding frenzy among Great Lakes trollers, many of whom are getting fired up for the July 10-18 Salmon-A-Rama and the July 23-31 Kewaunee/Door (K/D) Salmon Tournament.

Accurate Marine, Tackle and Storage in Kewaunee and Howie’s Tackle & Archery in Sturgeon Bay are among the ticket outlets and weigh-in sites for both events.

Other K/D ticket outlets include B & K Bait and Tackle on Washington Island, Baileys 57 in Baileys Harbor, JP Express north of Carlsville, Greystone Castle in Sturgeon Bay, Algoma BP and JP Express in Algoma, and Center Court Convenience in Kewaunee.

Tickets for the K/D are $25 per person, or $13 for a one-day shot. Get the latest tournament news at facebook.com/kdsalmon2021. (You don’t need to have a Facebook account to view the page.)

Salmon-A-Rama ticket prices vary by category (boat, shore, kayak, youth and more), but they are more expensive because of a diverse payout for multiple species. Check out that event at salmon-a-rama.com.

The 64th International Convention of Allied Sportfishing Trades (ICAST) will be back for in-person attendance July 20-23 in Orlando.

Produced by the American Sportfishing Association (ASA), the event showcases more than 460 exhibitors and offers the first glimpses of new-to-most fishing tackle, apparel and accessories.

This year’s presenting sponsor is Take Me Fishing (takemefishing.org). The Recreational Boating & Fishing Foundation, which promotes these activities through Take Me Fishing, works with ASA on programs to engage people of all ages in recreational fishing. ASA President Glenn Hughes says manufacturers, buyers and media outlets make connections to purchase and promote the new gear.

One of the most popular ICAST events, the New Product Showcase, sponsored by Fishing Tackle Retailer, is a once-a-year opportunity to see the latest and greatest innovations all in one place. This year, the showcase will feature more than 675 new products in 30 categories.

“If there was a positive outcome regarding COVID-19, it’s that more Americans went fishing than ever before,” Hughes said. “This year’s trade show allows us to share our successes, exchange ideas and experiences, and provide information on how to retain these new anglers.”

The New Product Showcase entries will be available for viewing on the ICAST app and at ICASTfishing.org starting Tuesday, July 20, at 2 pm.

Although it’s true that fewer tags were purchased this spring, some believe the latest possible season – the sixth period ended June 1 – was part of the reason for the drop. Many hunters would like to see a return to the season starting a week earlier.

Author and Great Lakes charter captain Dan Keating has been sharing his wealth of experience and knowledge through articles, seminars, Salmon Schools and books for decades.

His newest book – Big Water Wisdom: The Complete Trolling Q&A Guide – answers more than 500 salmon- and trout-fishing questions. Whether you’re new to Lake Michigan trolling or just want to learn some advanced techniques, there are 200-plus pages of big-water wisdom that’ll help you put more fish in the cooler.Keating’s books are available on Amazon, at some bookstores and tackle shops, and at captaindankeating.com.