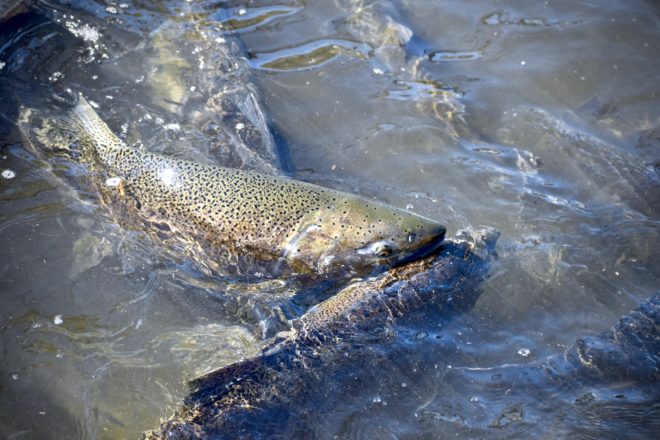 Wisconsin Department of Natural Resources fisheries staff collected more than 2.5 million eggs from Chinook salmon at Strawberry Creek this fall for state hatcheries. Next up? Coho salmon and brown trout in the coming weeks on the Kewaunee River. Photo by Kevin Naze.

A potentially contentious final draft of a Wisconsin Department of Natural Resources (DNR) wolf-management plan is expected to be released soon. The DNR has worked with more than 20 wolf-stakeholder representatives to formulate the plan, which has been only slightly modified since the last one was written in 1999.

It’s possible that the results of a new social-science survey on public attitudes toward wolves could be released around the same time, but there’s been no word from the DNR about that.

The last DNR survey – conducted through mailings sent to thousands of state residents living both inside and outside of wolf country – was done in 2014. It found that a slight majority favored keeping wolf numbers similar to what they were, or increasing the numbers.

Critics howled, saying the questions were unfairly written to get a specific response. Wolf advocates celebrated. Little has changed since, with both sides remaining miles apart on whether a hands-on or hands-off management approach is best.

The attacks happened despite targeted efforts last year that resulted in more than 60 wolves being killed by government trappers near farms that were experiencing chronic livestock depredation.

Meanwhile, the DNR recently released its 2021-22 overwinter wolf-population estimate. The computer model – based on winter monitoring surveys covering more than 16,700 miles and involving DNR staff, tribal members and volunteers – estimated that there were likely somewhere between 812 and 1,193 wolves in 243 to 352 packs. A best estimate, according to the DNR, is that there were at least 972 wolves in 288 packs.

That was about 14% lower than the previous year, but expected after a February 2021 harvest season that saw 218 wolves killed, plus more than 60 taken on depredation or landowner permits.

The population estimate was made prior to new litters this spring. Pregnant female wolves typically give birth to four to six pups.

Nearly 35,000 deer were taken during the first month of the 2022 season – a significant increase of more than 50% compared to this time last year.

Although a mild winter certainly gets some of the credit for more deer on the landscape, DNR deer program specialist Jeff Pritzl said this year’s weather has been much better than the warm, wet and windy fall of 2021. Hunter effort may be up, too.

The biggest increases from last year at this time are occurring in the Southern Farmland Zone – the one with, by far, the most chronic wasting disease.

Door County hunters had reported 376 deer (156 bucks and 220 antlerless), including 90 with bow and arrow, 111 during the youth firearm deer hunt weekend, and 175 with crossbow and broadhead-tipped bolt.

Project FeederWatch, a citizen-science project, runs Nov. 1 – April 30. Your counts allow you to track what’s happening around your home while contributing to continent-wide data about bird distribution and abundance. Learn more at feederwatch.org.

Birders across the world set a number of records during October Big Day, held Oct. 8, including logging nearly 7,500 different bird species seen by more than 35,000 participants. Birders in Colombia, Peru, Ecuador and Brazil all tallied more than 1,100 different species. U.S. birders were 11th with 689. Learn more at ebird.org/octoberbigday.

DNR staff will share management options, and stakeholders will be able to present ideas and input. Learn how to participate at dnr.wisconsin.gov/topic/Fishing/lakemichigan/LakeMichiganSalmonandTroutMeetings.html.

The state Natural Resources Board will be asked next week to adopt rules requiring charter captains to report trip information electronically, similar to the reporting methods used by Wisconsin Great Lakes commercial fishers and fishing guides.