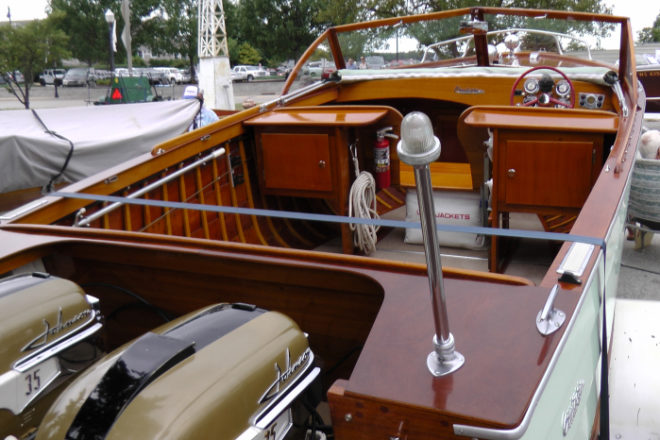 “Connie” by Lew and Judy Juadis.

Rich and Nancy Kapellen of Sheboygan not only were the People’s Choice Award winner for the best sailboat but claimed Best of Show honors with their 17-foot Penobscot 17 at the Door County Maritime Museum Classic & Wooden Boat Festival, Aug. 12 & 13 in Sturgeon Bay.

Other class winners in the People’s Choice voting were John and Sandi Seaman of Sheboygan for their 1895 16-foot Warren Cole Adirondack Guideboat “Long Lake” in the Non-Powered Craft class. It was the oldest boat in the show. Sturgeon Bay’s Russ Cihlar and his amphibious Amphicar “Surf & Turf” earned the Unique Craft award; Jim and Tina Jordan of Algoma with their 1969 16-foot Steury V-416 claimed Fiberglass class honors; Lew and Judy Juadis of Sturgeon Bay topped the Classic Outboard division with “Connie,” a 1957 18-foot Crusiers INC 502 Vacationer; and Roberta and Rich Hegy of East Troy, Wis., took the Classic Inboard division plaque with “The Glen L,” a 2015 19-foot Glen L Torpedo homebuilt. It is the only one in existence.

In the Sikaflex Challenge, brothers George & Neil Zachariesen successfully defended their title which was determined on a tiebreaker with the team of Brittany Hunt and Olivia MacDonald. Hunt and MacDonald claimed the trophy for the fastest build, needing only one hour and seven minutes to complete their vessel. Each of the 10 competing teams were given a limited amount of lumber and Sikaflex sealant to build a boat within four hours. Hunt and MacDonald were also voted the People’s Choice winner for favorite theme in the Sikaflex Challenge and will have their names added to the Palmer Johnson Trophy.