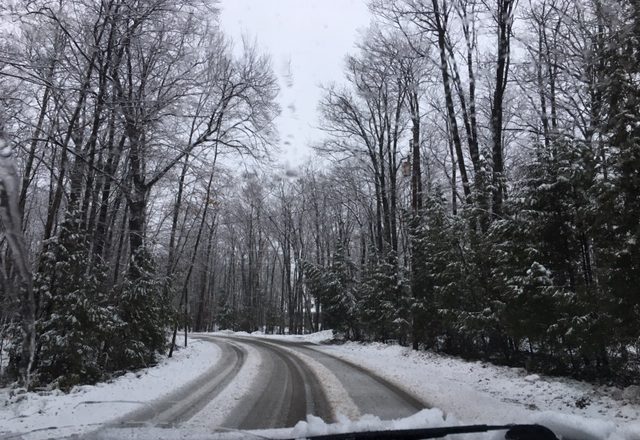 I thought it would be a good idea to do a winter hike during a big snowfall. I imagined it would be quiet, sparkling, mesmerizing. And it was quiet – but also dark and gray and creepy.

The first mistake I made was not planning ahead. I had intended to do a snowy hike after the Thanksgiving blizzard we received, but then I neglected to pick a spot until another one was already in full force.

My opportunity came when another snowfall struck on Monday, Dec. 30, and what better reason for leaving the office than to stretch my legs with a little outdoor stroll? I decided to do the hike in the late afternoon so I could complete the rest of my tasks before I left.

I chose to go to White Cliff Nature Preserve, or White Cliff Fen, in Egg Harbor. I had never been there before and was excited to try something new. I followed my GPS to Harbor Heights Road, an unplowed road leading down into the trees.

The key word here was “down.” The roads were icy. I had already drifted for quite an uncomfortable amount of time on County EE on my way there, and I wasn’t about to get stuck by trying to go down the snowy road.

So, I decided to turn around and try a new spot – one that I knew was flat and easy to get to. I made my way back east to Kangaroo Lake Nature Preserve.

It was the perfect spot. Until I noticed the footprints.

Snow had already covered the bulk of the trail, but spots in the mud underneath stood out. That’s where I saw footprints heading into the woods. There were none coming out.

I decided to continue down the trail in the quiet stillness of a gentle snowfall. I was just being paranoid, of course. There were no other cars in the lot.

Still, I couldn’t help but notice the footprints – and large ones at that. How could someone be in the woods long enough for a fresh blanket of snow to cover his or her tracks? I was beginning to feel as though I was being watched, but I knew I was just being paranoid.

I kept going until the point where the trail dips down into a more dense section of trees (which, honestly, wasn’t that far in). I wanted to keep going, but it was getting dark, and I had listened to enough crime podcasts to know what could happen to a woman walking in the woods on her own. I wasn’t about to get murdered.

I know, I know – this is Door County we’re talking about. Its quaint, pristine natural beauty would never be shattered by homicide. Well, that’s not true, and I didn’t want to become a ghostly addition to the plethora of spirits already haunting the peninsula.

Plus, bow hunting is permitted in some land-trust preserves, including Kangaroo Lake. The season continues through December and January after deer gun season ends. In addition to not being murdered, I was not about to get shot accidentally by a hunter, which could easily have happened: It was dark; I was being too quiet; and I was wearing a green coat and dark pants. That wasn’t exactly smart on my part.

I was disappointed in my paranoia – warranted or not – and I didn’t want to give up on my adventure. I decided to try one more spot before it got too dark.

I headed to Heins Creek Nature Preserve off Highway 57 in Baileys Harbor. The trail is a loop that goes along Heins Creek and through open dunes. I decided to start along the creek side, knowing I wouldn’t be there for long.

Getting to the creek takes you through a dense area of trees. I was feeling more confident this time. The only footprints I saw were my own.

But the trails were flooded. I couldn’t tell where the creek started. I was unable to press on.

Still, it was quite peaceful to just stand there and listen to the water flowing through the forest. It made my numerous trips worthwhile, even if the payoff lasted for just a few minutes.

As I drove home, I realized that my sad excuse for a hike had taught me a few things. I could have looked up these tips ahead of time, but they’re sometimes better learned through trial and error:

• Wear brightly colored clothing when hiking during hunting season, and be loud enough that nearby hunters might be able to hear you and won’t mistake you for an animal. You can read more safety tips from the Door County Land Trust at doorcountylandtrust.org/hiking-during-hunting-season-how-to-stay-safe.

• Don’t hike in the dark. But if you do, take a flashlight or headlamp. (And dang it, I had just been given one for camping and didn’t think to take it!)

• When the weather is less than ideal, pick a spot where you feel comfortable. It’s not worth trying to navigate an unfamiliar destination when road conditions could be dangerous.

• Tell someone where you’re going if you’re hiking alone. I actually did follow this tip. I was creeped out enough at Kangaroo Lake that I texted my boyfriend to tell him where I was in case something went wrong.

• Take a friend along if you’re a scaredy-cat like me. (It’s not my fault that I have a wild imagination!)

• Most importantly, stop and listen. I stopped along my walks numerous times to listen to the falling snow. There were times when it was completely silent and other times when it sounded like rain dripping through the leaves. It was quite beautiful, and I recommend this mindful activity – though next time I’m going hiking in the morning.