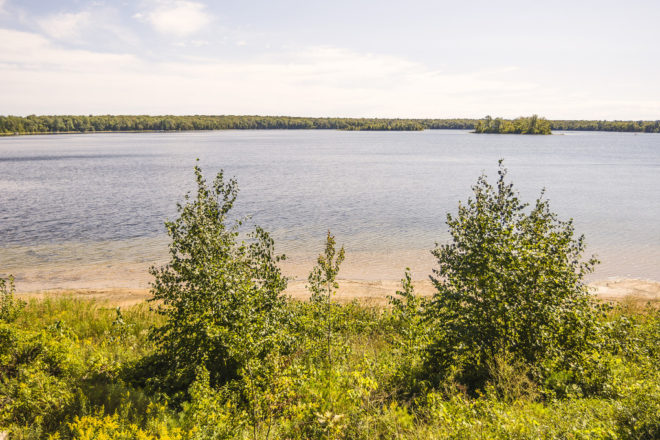 Mackaysee Lake on Chambers Island has been listed on the DNR’s impaired waters list since 1998. Photo by Len Villano.

The Wisconsin Department of Natural Resources (DNR) released a list of 240 waterways that it will add to the state’s impaired waters list. The additions will bring the total number of impaired waterways recognized by the state to approximately 1,500.

One of Door County’s waterways, Stony Creek, which starts northeast of Maplewood and runs southeast to Clay Banks, is newly listed.

The additional 240 impaired waterways listed are likely due to increased monitoring and stricter phosphorus standards put in place in 2010, according to a statement from the DNR.

“Through expanded monitoring, we’ve identified lakes and rivers where more work is needed to improve water quality for fish to thrive and for people to enjoy them recreationally,” said Sharon Gayan, director of the DNR Water Quality Bureau, in a statement. “The listing does not necessarily mean that phosphorus levels in these waters got worse. Phosphorus levels may be improving in some, but not enough yet to meet these new standards.”

Placing a water body on the impaired list means the department will have to develop a restoration plan. The list also makes those waterways eligible for state and federal cleanup funds.

John Jaschke, executive director of the Minnesota Board of Water and Soil Resources, said the additions are not necessarily a product of pollution, but of better monitoring. Jaschke told attendees of the Food, Land & Water Conference in Elkhart Lake in October that Minnesota’s significant investment in water monitoring in the past 10 years has led to the state identifying more than 5,000 impaired waterways, about four times as many as Wisconsin.

“Why do we have so many more than you do?” Jaschke asked the room full of Wisconsinites. “We’ve been identifying them quicker. We are in the last year of the 10-year intensive watershed monitoring.”

Wisconsin has added approximately 200 waterways to the impaired list with each biennial report since the list was first approved by the Environmental Protection Agency (EPA) in 2010.

Jaschke estimates the number of impaired waters in Wisconsin is significantly more than the approximately 1,500 on the list.

Excessive phosphorus is by far the biggest culprit, serving as the cause for almost half of the impaired waters on the list. Mercury, polychlorinated biphenyls (PCBs) and sediment make up a majority of the other pollutants.

The new DNR report also included 35 de-listings, or waters that were previously impaired but taken off the list due to restoration. Gayan said it is the most de-listings since 2010.

The four impaired waters in Door County are:

The DNR is accepting public comment on the proposed list of newly impaired waterways. Public comments may be submitted by December 29, 2017, and can be emailed to DNR at [email protected], or sent by US mail to Ashley Beranek, DNR, Water Evaluation Section (WY/3), Box 7921, Madison, WI 53707. Comments postmarked or received by Dec. 29, 2017, will be considered before submitting the final draft list to the U.S. Environmental Protection Agency for approval.