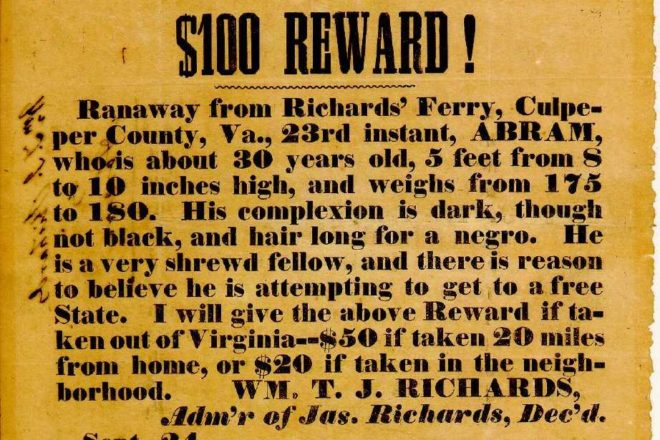 While parts of this country were still engaged in the trafficking and sale of human beings as slaves in the middle of the 19th century, Wisconsin served as a stepping stone to freedom for many escaped slaves.

Perhaps the best-known of those is Joshua Glover, who in 1852 escaped from the 300-acre Missouri farm of Benammi Stone Garland, who bought Glover in St. Louis in 1850. After escaping, Glover made his way to Racine, Wis., where he found a job and a place to live. 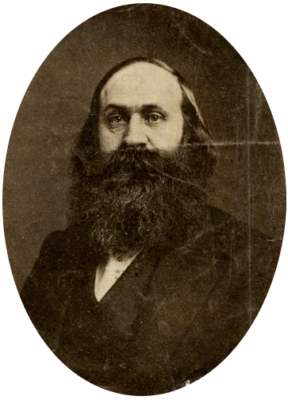 In 1850, the same year that Glover was sold to Garland, Congress revised the Fugitive Slave Act of 1793, which compelled citizens to aid in the capture of runaway slaves and imposed heavy fines if they did not do so.

Little is known about Joshua Glover’s flight from Missouri to Racine. It is known that he left on or about May 15, 1852. Garland began running a fugitive slave notice in the Missouri Republican on May 19, 1852, and continued it every day for the rest of the month. The length of time it took Glover to make the 350-plus-mile journey from St. Louis to the antislavery town of Racine is also unknown.

Glover got a job at a sawmill on the Root River a few miles north of Racine. He was provided with a shanty on the river, where he lived without incident for nearly two years.

But on Friday March 10, 1854, Garland showed up in Racine with an arrest warrant for his runaway slave and the notion of returning to his Missouri home with Glover as soon as possible. With several law officers and others making up a posse, Garland and the posse went to Glover’s shack, beat him, shackled him and brought him to jail in Milwaukee. Glover’s captors thought it would be safer to hold the runaway slave in Milwaukee than in the abolitionist stronghold of Racine.

Word of Glover’s capture filtered north to abolitionists in Milwaukee, including newspaper editor Sherman Booth, who printed up a handbill alerting the city that a man was being held in jail by slave catchers, and that a secret trial would be held for him. “Shall we have a Star Chamber proceedings here?” Booth wrote. “And shall a man be dragged back to Slavery from our Free Soil, without an open trial of his right to Liberty?”

Back in Racine as news of Glover’s capture spread, a warrant was issued for the arrest of slaveowner Garland and the deputy marshal who arrested Glover, and a committee of 100 men was charged with bringing the pair back to Racine.

Meanwhile, Editor Booth took to horseback in Milwaukee to announce a 2 pm gathering in Courthouse Square. Somewhere between 3,000 and 5,000 people showed up at the square, and out of that, 25 men were chosen as a “vigilance committee” to protect Glover’s rights.

When it was announced at about 3 pm Saturday that Glover would be held in jail for a Monday hearing, the crowd decided to take things into their own hands. Using lumber from the nearby construction of St. John’s Cathedral, several men battered down the jailhouse door and freed Glover.

Meanwhile, a crowd had gathered in the town square in Racine, awaiting news from Milwaukee. When word reached those in the square that Glover had been freed, according to the Racine Advocate, a “universal expression of satisfaction burst forth…and cannon were fired, bands of music patrolled the streets and every demonstration was made…at the triumph of humanity over brutality and the slave driver’s power.”

Glover then traveled by buggy to Waukesha, a hotbed of abolitionist sentiments. The community’s newspaper, the Waukesha Freeman, can trace its name and heritage to the abolition movement.

From there, Glover was taken to Racine and left with a Congregationalist minister until arrangements could be made for him to slip away by schooner to Canada. Glover arrived in Etobicoke, Canada, on April 19, 1854, and lived out his days there until his death in June 1888, far away from the legal battles that ensued over his capture and escape.

Slaveowner Garland was briefly jailed in Racine for the beating Glover suffered when he was captured, but quickly returned to St. Louis upon his release and started his own flurry of legal actions against Sherman Booth and others who took the lead in giving Glover his freedom.

Booth faced two trials in 1855 – a criminal suit that would determine whether he had violated the Fugitive Slave Act, and a civil suit to decide if Booth owed Garland money for the future services of his runaway slave. On the criminal charge, a jury deliberated for seven hours and fo 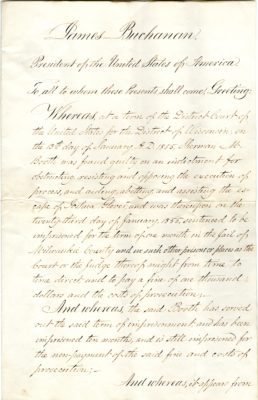 und Booth guilty of aiding and abetting Glover’s escape. He was sentenced to a month in jail and ordered to pay a $1,000 fine. In the civil suit, Booth was found liable and ordered to pay $1,000 and $246 in court costs. A U.S. marshal ordered the newspaper editor to sell his presses in order to pay his debts, but even their sale would not cover the costs, so Booth spent more than a year in jail.

After his first five months in jail, sympathizers broke him out, and Booth went to Waupun, where he lived for two months with, ironically, the warden of the state penitentiary, before being captured and returned to jail on Oct. 8, 1860.

Booth and his attorneys attempted to have the convictions overturned, without success. Booth later said the whole thing cost him in the neighborhood of $35,000.

Booth finally wrote a letter to President James Buchanan, petitioning him for a pardon. On March 2, 1861, Buchanan issued a pardon and freed Booth.

Bankrupt upon his release, Booth stumped the country to make speeches in aid of the war effort. He then settled in Chicago and returned to his newspaper career, writing mostly for the Chicago Tribune. He died in August 1904 and is buried at Forest Home Cemetery, Milwaukee.