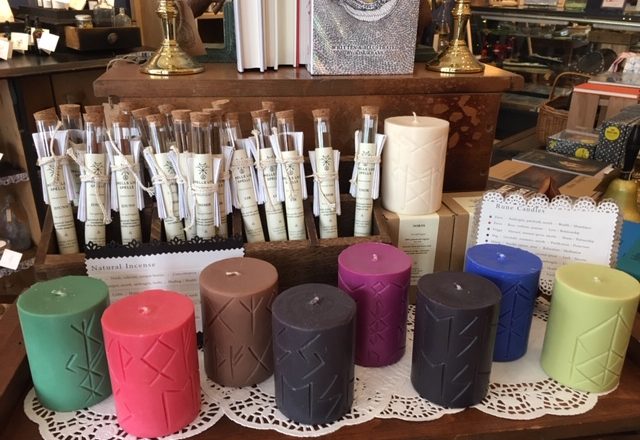 Walking into Within Things: Curiosity Shop, there are scents of candles and book pages and a definite sense of history. Jon and Teresa Mueller, the husband-and-wife owners of the eclectic shop, greeted me.

They’ve recently relocated to Sturgeon Bay from their previous location at Shorewood Village in Ephraim, opening in March, and they’re about to enter their second season of business, this time closer to home.

Before opening the store, Teresa had worked at Verizon for 21 years, and Jon had been involved in numerous music projects, including work with Pele, Collections of Colonies of Bees and Volcano Choir, plus solo percussion projects. He also created Rhythmplex, a platform to share his works and collaborations.

Verizon downsized, eliminating Teresa’s position companywide, so they thought, “What should we do next?” Door County immediately came to mind – Jon’s parents and some friends live here.

So, they decided to open a shop inspired by the things they like and have looked for most of their lives, Jon said. This includes an array of books, records, instruments, paintings, décor and other “curiosities” – some collected over a number of years, and others sought out after opening the shop last summer.

Jon discovered a lot of it while on tour or through people they’ve met along the way. There’s a connectivity between them and the shop that comes from personal experience, they said. But what they’ve found is rooted in so many sources.

“I’d say the connection between everything we carry is the creative spirit,” Jon said.

Within Things’ online bio uses words such as “obscure,” “esoteric,” “primitive” and “mystic” to describe the shop. And it’s true: while in the store, I felt an almost palpable otherworldly and spiritual feeling emanating from the objects, making the name Within Things particularly fitting. It’s something that should be experienced in person.

“We’re interested in the sense of wonder the shop can inspire when you walk in and spend some time looking around,” Jon said.

Things such as deer antlers, herbal tincture bottles, a kerosene lamp, natural incense (from Smells Like Spells) and a small broom hanging on the wall made me think of a modern witch’s den – not to mention the array of books from publishers in England and Ireland detailing ghost stories and the supernatural sitting neatly on a table.

“Global” is another good descriptor. There were all-natural candles from Lithuania with runes carved into sides, each with a different meaning and purpose for burning. There was folk art hanging on the wall inspired by a Deutsch/German style called fraktur. Hanging on a tree were ornaments made out of biscuits with designs on them based on a German tradition called springerle. There was a historical drum from Haiti.

In Ephraim, the Muellers were surprised to find that some of these more obscure items did end up being purchased, and they’re excited to see what will happen in Sturgeon Bay. They’re looking forward to curating items in their shop that people are interested in seeing.

They had been actively looking for an opportunity to move the shop to Sturgeon Bay, in hopes that it would be easier for customers to reach and allow them to narrow their scope. Offerings are being more carefully selected, Jon said, and there’s more of a focus this time around.

When I asked Jon what their favorite items were, it was hard for him to get to a final answer.

“It’s an intense extension of our home,” he said.

It’s a shop chock-full of ideas, but that doesn’t necessarily mean they adhere to them. For example, the Muellers have a book published by Ouroboros Press called Daemonologie. It was written in 1597 by King James, who later provided a translation of the Bible.

It’s a philosophical dissertation debating topics of witchcraft and sorcery that were examined at the time, but sometimes people come into the shop and get the wrong idea. In reality, the Muellers are just as curious about the items in their shop as their visitors are.

Though there are new items in the shop, history almost seeps out of the walls. What’s novel is the representation of the old. People today are recreating and paying tribute to old styles of art, ensuring it’s not lost.