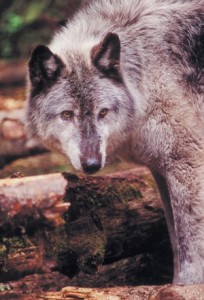 “You talk about a controversial topic,” said Mike Neal, Baileys Harbor-based warden with the Wisconsin Department of Natural Resources. “You go from one extreme of someone who absolutely despises them and thinks they should be exterminated because they’re going to kill every deer on the planet, to going to the opposite side of the spectrum, we need to save every single one of them. There’s a balance in there. It comes back to, what can the landscape tolerate.”

“They’re here, just like bears,” he said. “Until they start creating a problem, so what?”

“It was pretty clear that’s a wolf,” he said of the five-inch long tracks. “When you look at a wolf track compared to a coyote track, a coyote track is three inches at best and it’s egg shaped. A wolf track is circular and the size of the palm of your hand.”

This winter a wolf was captured on a trail camera on Washington Island.

“A guy caught it on a trail camera while they were hunting coyotes,” Neal said.

“It was a pair. They were Michigan wolves,” he said. “We know that because they had red ear tags and that was the color designated for Michigan. There were multiple sightings between Egg Harbor and Carlsville. Then they just kind of disappeared from the landscape. There was another one in Egg Harbor. It killed a deer. There were pictures of that.”

Neal was also involved in dealing with the two wolf shootings, the first of which was in Northern Door in May 2003, while wolves were still on the threatened/endangered species list.

“I was actually on my way to North Dakota and my wife called me, ‘Hey, there’s a guy here in the yard who thinks he shot a wolf.’ The guy didn’t know what to do,” Neal said. “He said, ‘My buddies are telling me I ought to burn it, bury it. What do I do?’”

Neal asked the man to save the wolf until he returned from North Dakota.

“We’d never documented one in the county,” Neal said. “Now we’ve got one. The guy actually saved it for me until I got back into the county. Sure enough, it was a wolf. Okay guys, here’s your one free one. They’re here. They do exist. You need to pay attention to what you’re shooting at.”

The second wolf mistaken for a coyote was shot near Forestville in 2004.

Neal said a straight line from where the wolf was collared in ’02 to where it was shot in ’04 was 178 miles.

Neal said the coyote hunter who shot the collared wolf was fined rather than face a criminal violation.

Evidence of wolves should not have Door County residents up in arms.

“We’re not overrun with them. We just get the occasional one or two. Why they come here, no idea, They’re a fascinating creature because they can adapt to virtually anything,” Neal said. “The reality is we just don’t have the right habitat. We have just enough people to make it uncomfortable for them.”

Neal’s counterpart in Sturgeon Bay, Warden Chris Kratcha, said the long winter of 2013-14 was the perfect winter for big, bad wolves to make their way here.

“What usually happens when we have winter like now where we have some good ice, we’ll get some male dispersers looking for new territory or another mate. It doesn’t necessarily have to be a male,” Kratcha said. “They wander into Door County looking for a mate or new territory. It’s not the most ideal wolf habitat, although we’re rural in nature, it’s pretty highly populated. They might stay for a little bit and then move on.”

Kratcha said it’s anybody’s guess how many wolves are in Door County.

“There could be two here, there could be one here or there could be none here. We really don’t know, but there’s always a high possibility that there is one here, based on past experience,” he said. “What we can say with certainty, there are no radio-collared wolves that are quote-unquote ‘on the air’ in Door County.”

Kratcha said both he and Neal usually hear about it if there is a sighting.

“What happens, I might get a report or Mike might get a report about a wolf in the area, maybe a trail camera photo. We’ll get a series of calls in a close time frame, and all of a sudden it will stop. That leads me to believe they are here temporarily.”

Kratcha said it’s been a year or two since he has gotten a sighting with any merit to it.

“I’ve had people tell me there’s a pack of 30 in southern Door, which is highly unlikely,” he said. “When we do get a sighting that has some merit to it, and other people hear about it, then every coyote that gets observed 200 yards away in the middle of a plowed field with no other animal or object next to it becomes a wolf.”