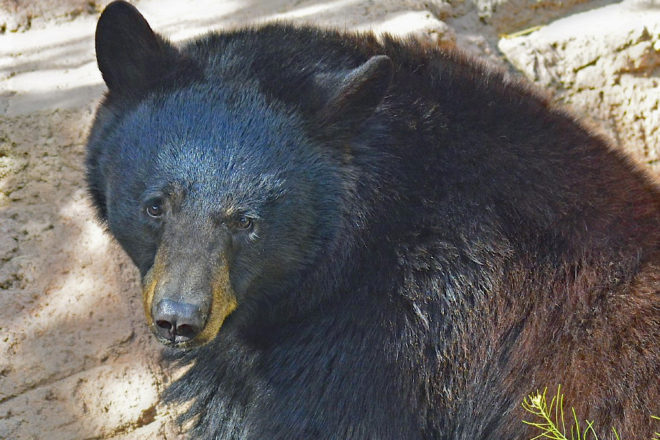 Black bears aren’t common in Door County, but it’s estimated there may be a dozen or so on the peninsula at any given time. Photo of an adult black bear courtesy of Darrell Smith, Western Wildlife Outreach.

Somewhere in the woods of Door County, or deep in a swamp, a black bear is foraging for food right now. Fortunately for most of us, it’s unlikely we’ll ever run into it.

“Wolves and bears are scared of people – very secretive,” said Mike Neal, a conservation warden for the Wisconsin Department of Natural Resources.

Bear sightings on the peninsula are extremely rare, but wildlife experts estimate there could be anywhere from 10 to 20 in Door County at any given time. Greg Sunstrom shot a 287-pound black bear with a bow on the first day of bear hunting season in the Mud Lake area in 1987. His father, Willard Sunstrom, shot one two years later in the same area.

Neal saw his first black bear here in 2000. It surfaced on Sun Plaza, just a couple of miles north of downtown Baileys Harbor. It weighed 410 pounds and showed up scavenging for food on the back porch of a home.

Because it had grown comfortable being near humans, Neal said the bear was euthanized based on the DNR’s three-strikes rule: It had come in close contact with humans three times.

“Bears don’t know their strength, so they may just paw at you, but they can kill you by playing,” Neal said.

The meat from the bear went to Paul’s Pantry in Green Bay.

Neal said bears sometimes travel surprising distances. One bear that the DNR tagged in the UP was tracked to Menominee, Green Bay, Kewaunee, Baileys Harbor and up to Gills Rock.

“We just don’t have a lot of habitat here,” Neal said. “We’ve sort of squeezed them out. In Vilas County, they’ll find them in culverts, and they drown when the water melts in the spring.”

Outdoors expert and Pulse columnist Kevin Naze said that after hearing about the Sunstrom’s bagging their bears in Mud Lake he was determined to do the same.

More recently, a black bear was reported at Kangaroo Lake Nature Preserve in August 2018. Bears have made a comeback in Wisconsin, growing from a population estimated at 9,000 in 1989 to 29,000 today.

Although bear sightings are rare, reports of wolf sightings are more common on the peninsula, though not necessarily accurate. Many people mistake large coyotes for wolves. Neal said a wolf is roughly twice the size of a typical coyote, and it has a howl that’s distinctly different from that of a coyote.

“The howl is unlike anything else you’ve heard,” he said.

A collared wolf was spotted by hunters in northern Door County in November. Neal said the DNR hasn’t determined yet if it was a Michigan or Minnesota wolf.

A wolf track is about the size of an adult’s hand, and a coyote track is egg-shaped and less than three inches in size. It’s estimated that there are no more than a dozen wolves in Door County at any time, and the statewide population is estimated to hover at just more than 900. That’s a dramatic comeback from the estimated 14 that lived in Wisconsin in 1985.

Josh Martinez, a DNR wildlife biologist, said there has never been a wolf pack established in Door County.

“We just have lone wolves that have been kicked out of the pack, and they’re always male,” he said. “Females stay with the pack. A lone wolf will move a lot, maybe 20 miles a day, looking for food.”

Although many hunters worry that wolves will decimate the deer herd, Neal said wolves don’t normally chase a healthy buck.

“They’re chasing a sick animal, culling the herd,” he said, and humans are at even less risk. “There’s been one wolf attack documented in North America – ever.”

Darrell Smith is a wildlife biologist with Western Wildlife Outreach, a Washington State-based organization whose mission is to provide science-based information about grizzly bear, black bear, wolf and cougar ecology, biology and behavior. He said humans have an unsubstantiated fear of North America’s large carnivores.

“Wild wolves have killed maybe three people ever in North America,” he said. “They’re extraordinarily shy, and they’re so good at staying away from people. They’re not the real bogeyman that people think.”

Smith said that all large carnivores – including black bears, cougars, grizzly bears and wolves – kill about three humans every year. Most of those kills are made by grizzly bears.

“Black bears are incredibly easy to live with,” he said. “You just have to be smart when you’re around these animals.”