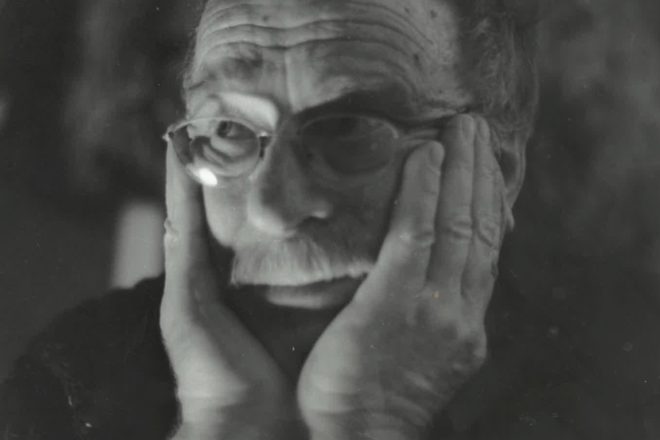 Black-and-white film photo of Smith by Shawna Anschutz, Class of 2008.

On April 22, I learned of the passing of my former art teacher, Mr. Smith. My initial reaction was that it was a horrible rumor, but the obituary online confirmed my worst fears. Tom Gerhart Smith passed away on April 15, 2019.

Smith was hired as a substitute teacher at Gibraltar in 1996 before coming on full time as a technology instructor in 2000. This eventually led him to the position of high school art and photography teacher. The switch came shortly after Gibraltar reinstated its Tech Ed program. Smith also served as a naturalist at Newport State Park from 1996 to 1998. He retired from Gibraltar in 2015.

At school, Smith was a man of few words, and most of what he said sounded like nonsense. Yet his students were always able to decipher the seemingly incoherent ramblings. The time in his class was as unstructured and scattered as he was. His focus as an art teacher was less about following a lesson plan and more about fostering the creativity and imagination of the students.

His teaching technique was hands-off, allowing students time to work through any problems. When it was most needed, he would swoop in to talk about your piece, offer advice and reignite that spark of inspiration you had when you first took the project on. Smith also made sure his students had everything they needed, even giving them materials of his own if that’s what was needed.

I can say that I finished very few projects during the three years I had Smith as a teacher. He never got mad or forced me to finish something. He would encourage me to set it aside and start something new – it would always be there when I felt inspired again. When I would complete something, he would act like a proud grandfather, gushing over it and praising me for a job well done. It was moments like these that carved out a place for him in my heart, forever embedding his wisdom and wackiness into my life. Smith was more than a teacher, not only to me, but to all the students who spent time in his classroom.

Reading others’ memories of him online, one word and idea that kept showing up was “sanctuary”: a perfect term for what he meant to everyone. The time spent in his classroom felt safe; there were no expectations, no judgments and nothing but love. During class, you could sit with him in his office as he practiced his drawing (after an unfortunate surgery on his hand had gone wrong, Smith’s drawing hand was damaged, and he spent time in his office retraining the hand) and just relax, or he was an open ear to discuss things that were going on in your life.

Smith, you will be dearly missed by all of your students and fellow faculty members. On behalf of everyone, I would like to thank you for the years of laughter, encouragement and creativity. I’m sure many will be toasting a can of sauerkraut in your honor. Rest peacefully.

Smith is survived by his wife, Shirley; his son, Joshua; his sister, Susan; and many cousins, nieces and nephews.

Mine is far from the only experience. Here is a small sample of other students remembering Smith by sharing their experiences and memories. Messages have been edited for length and clarity.

Smith’s class was my sanctuary during high school. He was such an amazing and caring individual who found the best in every kid and pushed them to be their best and most unique self. I remember one time I was hanging something from the ceiling, and he ran around my legs with plastic wrap and wrapped my legs together. Screaming something incoherently. Silly and outrageous one moment, and quiet, caring and empathetic the next. Thank you for being a piece of what made me who I am today, Mr. Smith. – Amber Bennett, Class of 2007

I will never be able to smell hazelnut coffee and not think of him … 90 percent of the time he made no sense, but that never seemed to matter. We always understood what he was getting at. I’ve never met someone who loved his students like he did, and I can’t say enough how many lives he touched. Rest easy, captain! – Emily Johnson, Class of 2009
I can say that Mr. Smith, aside from being a fantastically talented artist, was a creative, supportive and overwhelmingly amazing teacher. I was blessed to be in his classroom for four years, in which the only restraints on what I was allowed to create, and explore, were within my imagination and our budget. – Martin Witteborg, Class of 2012

Smith was a man of few words, most of which did not make sense. Here are some of the most iconic Smithisms heard throughout his time as a teacher.

“You dropped your fremmel on the gris!”

Student: Smith you have 235 people who love you!

Smith: I LOVE THEM TOO!

*Students created a Facebook page in 2009 to commemorate all things Smith.