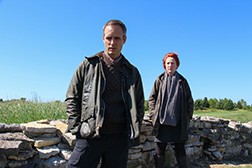 (Left to right) Jay Whittaker and Maggie Kettering as Anthony and Rosemary in the Peninsula Players Theatre production of John Patrick Shanley’s “Outside Mullingar.” Submitted photo.

Peninsula Players celebrated the 80th anniversary of its first performance in July. Co-founder Richard Fisher, also a playwright, set the precedent for artistic directors to follow when selecting the lineup of works: a mix of thrills, laughs, suspense as well as classic plays and the première of new works.

To this day this mix delights audiences. On Aug. 19, the Players opened the Wisconsin première of John Patrick Shanley’s new work, a quirky romantic comedy, Outside Mullingar.

Early in his writing career Shanley was determined to not be labeled an Irish-American writer. “I wanted to write about everybody,” he said in the New York Times. “And for the next 30 years I did.”

Shanley is a prolific writer, with more than 25 plays and screenplays in his body of work. He wrote the lyrics to the opera based on his Pulitzer Prize-winning play, Doubt: A Parable. His screenplay Moonstruck earned three Academy Awards, including Best Screenplay and a Best Actress Oscar for Cher.

Shanley has written about volcanoes and the Congo, but he never ventured into his Irish heritage until he took a special trip with his father to the homestead in Ireland. Shanley was raised in an Irish-Italian working class sector of The Bronx. His father was born on a farm in the Irish Midlands where he raised sheep and cattle with his brothers.

“His brothers and sisters had brogues and my father used to play Irish music on the accordion while the family danced,” Shanley said in an interview with SGN of Seattle. “I was inundated with this, but never wanted to write about that. I think people want to escape from the childhoods they’ve known and that prevents them returning to it in joyous ways.”

In 1993 his father, who immigrated to the United States when he was 24, was too old to travel alone and asked his son to take him to the family farm outside the village of Killucan, near the town of Mullingar, in County Westmeath. Shanley was 42 when he took his elderly father home and this visit awakened his Irishness.

“When I sat with my father in that farm kitchen, the one that he had grown up in, and listened to my Irish family talk, I recognized that this was my Atlantis, the lost and beautiful world of my poet’s heart,” Shanley told the New York Times. “There was no way to write about the farm, yet I had to write about it. I listened to the amazing language these folks were speaking as if it were normal conversation, and I knew this was my territory. But it was new to me. It was a time to listen, not to write.”

He listened for about 20 years, until his 60th birthday, a milestone that made an impact on Shanley. His parents were dead; his own hair was gray. “I was miserable, dead, barren and solitary,” he continued in the New York Times. He moved to an apartment with a view. “It was just me and the river and the sun and time. A year went by. One quiet day, I sat down without a thought in my head and wrote a play about the farm.”

Outside Mullingar is the first work in which he pays homage to his Irish heritage. Shanley recalled listening to his relations converse around the kitchen table with vigor, emphasis and conviction in the introduction to his script for Outside Mullingar.

“(Aunt) Mary’s declarations came out at the rate of water gushing from a fire hose,” he said.

It was a gloomy and dark day, yet no lights were on. When Shanley inquired if there was a power failure he “set off a series of denunciations and exhortations about the light switch, which was finally thrown by my cousin Anthony as if he were setting fire to the national treasury or electrocuting the only woman he had ever loved.”

The strong bonds between his family members left a lasting impact on Shanley. He was influenced by their loyalty to and love for one another. “I wanted to put on stage something I hadn’t seen” Shanley told The Seattle Times. “Sometimes a son and a father, a mother and a daughter, just love each other, without equivocation, without apology.”

The love of family is weaved into the script. Outside Mullingar features two neighboring Irish families who bicker in their farmhouse kitchens. Shanley’s creativity and his own awareness of life’s fleeting opportunities altered and sharpened the family stories of his Aunt Mary, Uncle Tony and cousin Anthony.

Outside Mullingar’s Anthony is in his 40s and comfortable in his eccentric nature. He has stayed on the farm with his father, Tony. Rosemary, his slightly younger neighbor, lives with her mother, Aoife. Keeping them apart is a dispute over a wee patch of land and the mysterious ways of the heart. Smitten with Anthony since childhood, Rosemary is passionate and determined to not let an American relation inherit the farm over Anthony, nor to let love pass her by.

Outside Mullingar opened on Broadway for a limited run Jan. 3, 2014 and marked the Broadway debut of Debra Messing and also featured Brian F. O’Byrne. The play earned Shanley a nomination for a Tony Award for Best Play.

Outside Mullingar is on stage at Peninsula Players from Aug. 19 through Sept. 6. For more information on Outside Mullingar or tickets, phone the Box Office at 920.868.3287 or visit peninsulaplayers.com.

Audra Baakari Boyle is the Business Manager for Peninsula Players Theatre and became a member of the company 24 years ago.