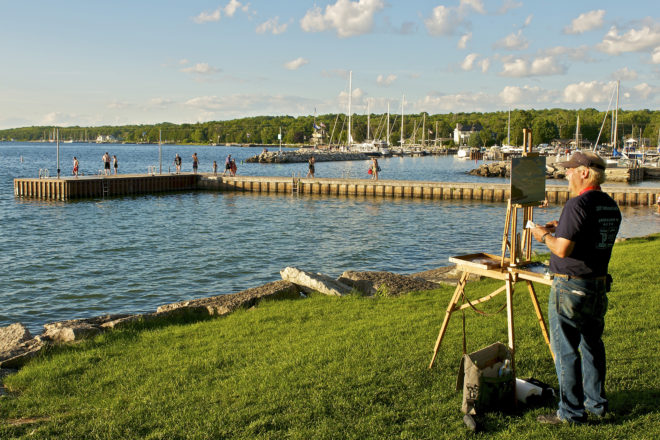 A plein air painter at the Sister Bay beach when the water was much lower in 2013. Photo by Len Villano.

Consider any of the following: a sunrise over Baileys Harbor, a sunset over Eagle Harbor, sailboats floating lazily in Sister Bay, families swarming Wilson’s Restaurant & Ice Cream Parlor in Ephraim, or an old, red barn on a country road. All of these visions of summertime in Door County are captured daily on cameras and shared with the rest of the world via Facebook, Instagram and anywhere else on the internet.

During one very special week in July, however, those classic peninsula scenes are also surrounded by a few dozen artists from across the U.S. who paint from life and landscape for the Door County Plein Air Festival.

Hosted by the Peninsula School of Art, this annual, invitation-only festival celebrates the tradition of painting “en plein air” (French for “in the open air”). Considered the largest event of its kind in the Midwest, the Door County Plein Air Festival is a staple of the peninsula’s art scene and often turns out dozens of true-to-life representations of our county’s people and landscapes.

The practice of painting outdoors has a long history, but its intentions have shifted dramatically since the mid-19th century. Hundreds of years ago, artists used the outdoors to draft preliminary landscape sketches that would serve as the foundation of their indoor studio work.

According to Ronald Parkinson — who wrote John Constable: The Man and His Art (1998) — Constable once wrote, “The world is wide, no two days are alike, nor even two hours; neither were there ever two leaves of a tree alike since the creation of all the world; and the genuine productions of art, like those of nature, are all distinct from each other.”

Painting outdoors became essential to his creative process, helping him to create landscapes that were considered revolutionary at the time because of their expressive quality and free brushwork. By the 1860s, plein air painting became fundamental to Impressionism and gained further popularity when paints in tubes came on the market.

Claude Monet, Pierre-Auguste Renoir and Camille Pissarro are among the best-known plein air painters of that time, and during the 160 years since, plein air painting has gone from being a means to an end to being the end result itself.

This art form and its primary focus on capturing changing light across landscapes have continued to change. The Door County Plein Air Festival and its organizers at Peninsula School of Art (PSA) have witnessed their own evolution as well since the festival began in 2007.

During the early years, PSA juried mostly traditional landscape painters who rendered representational works in oils and watercolors. Although plenty of traditional landscape artists remain on the festival’s roster today, PSA Executive Director Cathy Hoke has seen a shift in the kinds of artists who are pursuing plein air painting and the collectors who are interested in buying their work.

“The spectrum of what is good plein air painting has widened,” Hoke said. “I think artists with different visions and different approaches see that they can go out, and their practice can benefit from painting in the landscape from nature.”

Collectors are responding in kind, broadening their idea of the kinds of original work they respond to and purchase in Door County.

“They appreciate that that [artist] is standing in that field and responding to that environment in a way that’s meaningful and thoughtful and not rote, whether that’s someone painting super realistically or somebody painting abstractly,” Hoke said. “That this is a gift and a talent, and they’re seeing something that somebody else probably couldn’t do.”

Hoke points to artists such as plein air oil painter Beth Bathe and acrylic tonalist Brian Sindler as examples of those who are pushing creative boundaries at the Door County Plein Air Festival.

Bathe participates in upwards of a dozen plein air festivals per year and estimates that 70 percent of the artists at each one are traditional landscape painters who are interested in accurately capturing the scene before them. The remainder — Bathe herself and artists such as Sindler — are motivated to create works that fit their personal artistic vision, whether that means telling a story or evoking a mood.

“I really try to tell a story,” Bathe said. “It’s not just the whole vista I’m looking at. I can be looking at a whole vista, and I see a window with a bird sitting on it, and so I’ll do two panes of the window and the bird. In Door [County] last year, I stood inside [a] cherry tree and painted the ripe cherries hanging up close.

“As an artist, sometimes you want to stand out,” she continued. “You don’t want to paint like eight other painters.”

An irony, given the classic Door County subject matter that Bathe has been attracted to: cherry trees, sandhill cranes and sailboats. It’s further proof, though, that it’s not what an artist paints in Door County that matters to collectors, but how. Bathe’s paintings resemble sepia-toned photographs, and they have been well received on the peninsula, with one selling for three times her starting price during the festival’s silent auction last year.

The festival is appealing to more new, educated collectors,” she said of the change. “They kind of expect to be wowed and [to see] something new, so I think that’s why some of the artists are doing that. Or they’re not doing it — it’s how they work anyway. Events are accepting [and] jurying in more of those types of artists. Earlier, there have been times where I don’t get juried in because I’m different.”

On the opposite end of the spectrum is Sindler, who has been juried into the Door County Plein Air Festival a dozen times and who has become well known for rendering the peninsula — at the peak of its warmth and sunshine — in moody, atmospheric acrylic paintings.

“I want to make stuff that’s more a reflection of my mood or how I feel about things as opposed to what is already there,” Sindler said.

Painting well outside is no longer enough for some artists, he explained. Plein air painting — through its long-standing history as a genre for traditional landscape artists and its continuous evolution as a place for everyone — is helping artists everywhere to discover their own artistic vision.

“There are people who are going out and bending the landscape to fit their vision of how they want to paint it,” Sindler said. “Good art should be some kind of reflection of the artist who is making it, and it should be an honest reflection. I can admire somebody else’s work who paints nothing like I do, whether it’s something that’s incredibly well crafted or something that’s just very different. The application of the paint or their craft is different, or their vision is different.

“It’s kind of important to have self-awareness and know what your vision is and find that because it’s hard to be as good as somebody else who has found their vision,” Sindler said. “You have to do what you are drawn to, what inspires you, what makes you happy, and you will eventually be good at it, even if you admire something that is the polar opposite of what you do. You’ve got to express yourself.”

Fortunately in Door County, art collectors and appreciators can count on seeing fresh, new takes on familiar landscapes and scenes through this annual festival. Hoke and the rest of the staff at PSA will make sure of that.

“I think that we’re special in a way because we are an invitational event,” Hoke said. “It allows us on a national scale to find the people and to support people who have a unique voice or perspective on painting landscapes, and we can look for the best, or we can look for somebody who is pushing that just a little bit, whether that’s down the path of traditional realism or whether it’s on the other end of the spectrum.

“If we can find people who are up and coming who are pushing themselves — or they have a unique voice in some way, shape or form — that’s our job,” Hoke said. “Our job isn’t just to put out stuff that sells. Our job is to put out work that’s meaningful and to support artists who are doing meaningful work.”

This year’s Door County Plein Air Festival will be held virtually July 19–August 7, due to the COVID-19 pandemic. To learn more about the new format, visit PeninsulaSchoolofArt.org.