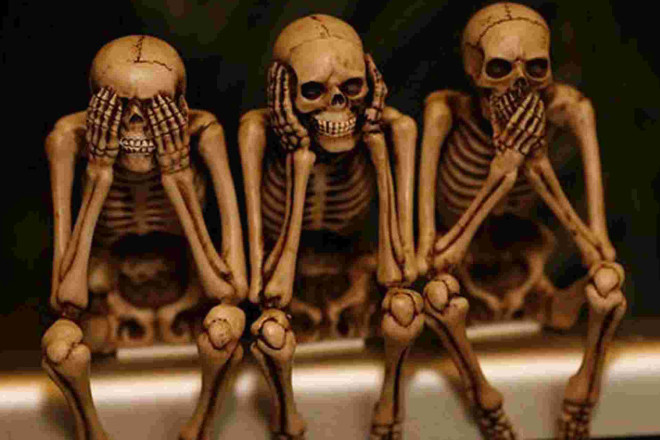 “Cabin fever. You got it bad.”

Wisconsin is still early enough in the fall season that the phrase “cabin fever” has likely not passed the lips or minds of anyone, save for a few Door County actors who, since late summer, have been perfecting their take on the emotionally debilitating condition in preparation for a staged reading of Cabin Fever.

Starring Bill Bauernfeind, Renée Kujawski and Chris Weidenbacher, and narrated by Donna Johnson, Cabin Fever is a “comedy of menace” by playwright Joan Schenkar built on the stories of people gone bad (or mad) as a result of that condition Midwesterners are all too familiar with: cabin fever.

Set on a backwoods porch, three mean-spirited locals talk amongst themselves about horrifying and hysterical local customs that set in during a long and harsh winter.

Blood and gore, insane asylums, attempted (and successful) murders and cannibalism dominate the gossip as one of the characters worries she might be hearing things, which the other two note as a telltale sign that she’s slipping into cabin fever.

Kujawski explained that the comedic effect comes out in the conversations, which are the dominant focus of the play and the reason the group decided to conduct Cabin Fever as a staged reading.

The ultimate period of crazy supposedly climaxes with the frequently referenced thaw. One example is a local woman, Miss Lampman, who is taken to the insane asylum because she can’t stop laughing.

“What happens when you’re cooped up in the winter for too long? Apparently you go crazy when the thaw hits,” Kujawski said. “And that’s what happened to Miss Lampman; supposedly she got hauled off to the insane asylum. In Act Two, we find out, no, she didn’t get hauled off to the insane asylum – the ambulance attendants ate her before she got there.”

That’s where Kujawski noted the biggest twist in the play comes – the shift in conversation between Act One, which takes place during the thaw, and Act Two, which is set in early spring.

“The stuff that they talk about in Act One sounds pretty literal, that that’s what they’re actually talking about, but then in Act Two, they go on to talk about some of the same events in an entirely different manner and it leaves the audience wondering, ‘Well, which one is true?’” Kujawski said.

Metaphors abound in what has been described as a “darkly funny play about people at the end of their winter rope.”

Cabin Fever runs Oct. 2-3 at 7 pm at Woodwalk Gallery, 6746 County Road G in Egg Harbor. Admission is free but donations are accepted. Performances are in a barn, so please dress for the weather. For more information, contact Bill Bauernfeind or Renée Kujawski at 920.743.9799.