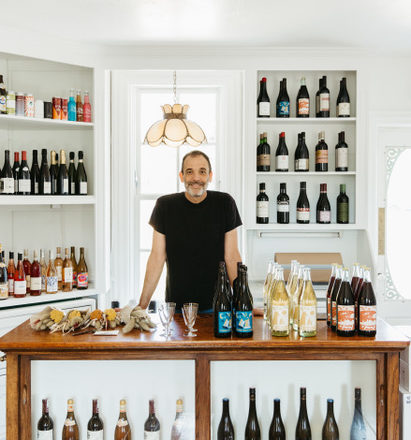 Ryan Ibsen and daughter Olive inside Daughters and Co., located in the Cupola Collective in Egg Harbor. Photo by Laura Quackenboss/xoME Studio.

Ryan Ibsen recognizes that people’s lives are busy and that many people don’t have regular access to the type of wine, beer and spirits they’ll find on the shelves of his new wine, spirits and provisions store, Daughters and Co., inside the Cupola Collective in Egg Harbor.

“These are foreign entities to some,” he said. “For me, they are my day in and day out.”

Ibsen’s goal is to meet people where they are, then introduce them to new tastes. But, he said, the new experience must be an extension of what they already enjoy.

“Anybody who does what I do is only as good as their ability to turn people on to things based on the criteria they give you,” he said. “What we put in here is a balance of things; there is something here for everybody. Sometimes it might require a little bit of conversation and finding out what they like.”

Ibsen’s shelves are stocked with an evolving selection of wine, beer and spirits from traditional and pioneering producers, with an emphasis on organic, biodynamic and natural production methods. It’s the culmination of more than two decades of experience in the wine and beverage industry.

Mass-produced, mass-marketed wines have their place; they’re just not what inspires him.

“I’ve always tried to avoid that,” Ibsen said. “If you look further, under the rock, there’s a whole world of wines there to discover. My whole interest in doing what I’ve done is turning people on to things they might not have bumped into on their own. I almost look at it like DJing and introducing people to new music.

“What I have been doing for so long started in idealism and remains the same since I began doing this in Seattle in the late ’90s. I’m a big fan of a balance of different styles of wine – traditional, all the way to new, experimental things. What I’m not a big fan of is purveying commercial for commercial’s sake.”

Ibsen got his start while in art school in Seattle and working in restaurants to sustain that pursuit. But wine grabbed him.

“I was working at Monsoon restaurant in Seattle,” he said. “That’s where it started to click. I caught the passion for it.”

He described his initial ventures into wine as postcards from places he had never been.

Becoming familiar with wine is a long game of memory.

“That’s how you get the language in the end,” he said. “A lot of experiences with similar things, similar geographies and varieties. You eventually get an idea of what you might expect from a certain producer or area or grape variety.”

Ibsen shares that language in what used to be known as the Cupola House, built by Levi Thorp in 1871. It’s one of the earliest structures in Egg Harbor and one of the oldest still standing.

The Cupola Collective is the latest incarnation of the historical building, founded this summer by Ashley Prange of Sister Bay and comprising Effie Street Kids, run by Ibsen’s wife, Jillian Pasztor; and Prange’s Au Naturale Cosmetics. Upstairs is xoMe Studio, the home of photographer Laura Quackenboss.

Ibsen and Pasztor returned to Sister Bay about two years ago after living and working in Southern California for several years. His family ties to Door County date back to the early 1960s in Ephraim.

“My grandfather – after he got tired of being retired – ended up as harbormaster, treasurer, Fyr Bal chieftain. So, I grew up with the lore of that place,” Ibsen said.

Before deciding to call the peninsula home, he spent 28 years running wine programs for restaurants in Seattle, New York and Los Angeles.

“I tell people I got here earlier than expected but later than I wanted to,” he said.

Ibsen’s connection with the Cupola Collective started with Effie Street Kids, a children’s shop with an eye toward the past. During family vacations as a young girl, including those to Door County, Pasztor always found a place to pick out a special remembrance. That’s what she wants customers to find in her new shop.

Ibsen found inspiration for his new venture during the process of getting that store off the ground.

“I was here with Jillian in mid-April and gave myself a tour of the house,” he said. During his exploration, he took the stairs to the basement, a place he had been once before with his grandfather in the 1980s.

“What I immediately noticed was that it’s pretty much limestone cut floor to ceiling,” Ibsen said.

It turns out that the limestone keeps the temperature in the basement consistent and makes it a great location for storing wine. That means the smaller retail space upstairs can be devoted to displaying Ibsen’s collection from around the world.

In the past, he wasn’t sure that a place such as Egg Harbor could support a specialized shop like Daughters & Co. That past uncertainty, he said, was based on not knowing whether there would be enough demand for noncommercial offerings and enough distribution in Wisconsin to get the items he wanted. So far, however, he’s been pleased with the level of interest and has been able to find the items he wants from just a handful of distributors.

And plans for the space continue to evolve. Ibsen and Pasztor plan to tap into their years of restaurant experience to expand the adjacent coffee bar, the Cupola Cafe – featuring coffee from Isely Coffee Roasters – into a breakfast and lunch café that’s open throughout the winter. The aim is to be open five days a week, from 8 am through the lunch hour.