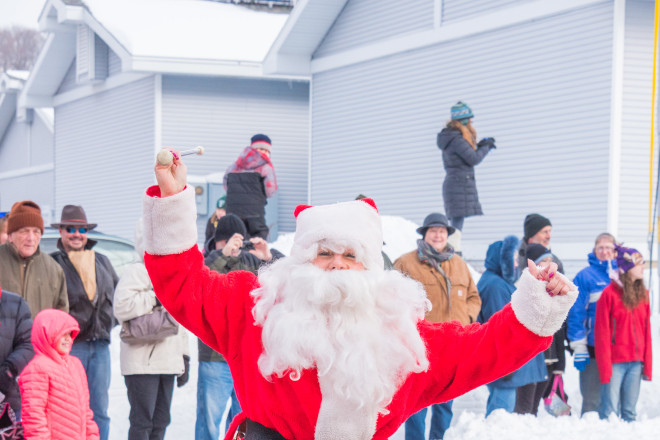 We put it all in one place, all the live music, community celebrations, parades and plunges around the county on New Year’s Eve and New Year’s Day. Now get out and do it!

Ski or snowshoe for free at Crossroads at Big Creek New Year’s Eve afternoon from 1 – 3:30 pm. Later, try the Sunset on the Old Year Hike.

Eric Lewis, Katie Dahl and Rich Higdon are Home for the Holidays at the Old Gibraltar Town Hall in Fish Creek at 4 pm. They’re bringing “a whimsical evening of song with folk tunes, Northern Sky favorites, and laughs.”

After sunset the county will be a-rockin. The Cajun Strangers play Door County Brewing Company Music Hall from 7 – 9 pm. In Egg Harbor, the Carrington Pub will host live music and karaoke beginning at 8 pm. Down the road Little Cisco will kick it off with blues at 9 pm at Mojo Rosa’s. Modern Day Drifters play country at the Log Den at 9 pm

Up north, Sister Bay will be packed for the first ever Cherry Drop into the Garage Bar at Husby’s at Midnight. Leading up to it, the New Year’s Celebration includes fireworks at 8 pm.

The Jacksonport Polar Bear Swim will draw thousands to the shore at Lakeside Park, but it remains to be seen how many will brave the frigid waters at noon. For southerly residents, Waterfront Mary’s will host a plunge at noon as well.

Egg Harbor hosts its annual New Year’s Day parade at 1 pm, giving you plenty of time to plunge, then head across county and catch this (thankfully short) annual tradition.

The final Red Putter Frostbite Open kicks off at 2 pm. You don’t have to qualify, you just need to dress warm and show up!

For the less crazy among us, Peninsula State Park hosts its First Day Hike at 10 am from the Weborg Shelter. Newport will host a hike as well from 10 am – noon.

Meanwhile, fat bikers will hit SNOWDRAFT Nordic for the New Year’s Day Ride from 10 am – 1 pm.

You can ski or snowshoe for free to start the new year at Crossroads as well.