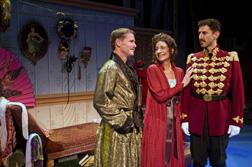 (Left to right) James Rank as Fredrik Egerman, Carmen Roman as Desirée Armfeldt, and Sean Fortunato as the militant Count Carl-Magnus Malcolm in “A Little Night Music,” on stage at Peninsula Players until August 15.

On stage at Peninsula Players through August 15 is Stephen Sondheim’s and Hugh Wheeler’s Tony Award-winning masterpiece, A Little Night Music, set at the turn of the last century in Sweden.

A Little Night Music interweaves a tangled web of former, current, and future lovers. Frederick is an esteemed lawyer whose 11-month marriage to a young bride remains unconsummated and whose son is fighting his attraction to the young lady. Things grow complicated when Fredrick is reconnected with a former love, the aging actress Desirée Armfeldt, whose married lover shows up with his wife in tow.

A Little Night Music will be on stage through August 15. Curtain times are Tuesdays through Saturdays at 8 pm and Sundays at 7:30 pm, except the closing performance August 15 at 4 pm. Group and individual tickets are available. Individual ticket prices range from $29 to $36; there are no performances on Mondays. For more information or to reserve tickets call 920.868.3287 or visit http://www.peninsulaplayers.com.