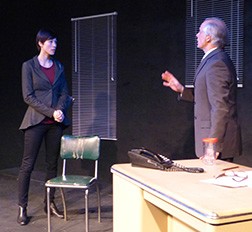 Madeline Bunke and Alan Kopischke star opposite one another in Stage Door Theatre’s Company’s production of Oleanna, written by David Mamet.

In 1991, former President George H.W. Bush appointed 43-year-old federal Circuit Judge Clarence Thomas to the United States Supreme Court. It was a controversial decision from the beginning and one that became even more so with the emergence of University of Oklahoma law professor Anita Hill.

Her accusations against Thomas for sexual harassment started a media firestorm that pinned one person’s word against another’s. Although the U.S. Senate eventually confirmed Thomas as an associate justice of the Supreme Court, the Hill-Thomas Controversy, as it became known, had far-reaching effects on the awareness of sexual harassment in the workplace. It also became the inspiration behind Pulitzer Prize winning playwright David Mamet’s drama, Oleanna, which will be performed throughout the month of March by Stage Door Theatre Company at Third Avenue Playhouse (TAP) in Sturgeon Bay.

The two-character production takes place in the office of a male college professor. A female student visits the professor’s office seeking help and guidance in the class, and that meeting soon becomes the contentious focal point of the play.

“That meeting is put under a microscope because she makes a formal complaint to the tenure committee of the college for sexual harassment,” said Bob Boles, who will direct the play at TAP. “Seemingly innocent things that were done or said in that first meeting suddenly become quite serious issues about who was right. It becomes a debate about what rights do men and women have with each other, and when do men, in this case, cross the line into sexual harassment? It becomes a whole debate about that where she, in effect, ruins this man’s career over this seemingly innocent meeting. It’s not clear, at all, who is at fault.”

Boles first saw the play in New York, when William H. Macy played the part of the professor (he also assumed that role in the 1994 film of the same name) and Rebecca Pidgeon played the female lead. He has seen it multiple times since and while the actors playing the roles may have changed, one thing has held true since the beginning.

“The audience never agrees,” Boles said. “ … This is a play where there would be nobody in the audience who wouldn’t have an opinion from the beginning about what they feel about how men treat women and how women treat men on a daily basis in the workplace, at home.”

Boles noticed that opinions often fall on gender lines, but not always. In response to this, there will be a “talk back” following every performance. It is typical for Third Avenue Playhouse to schedule one such discussion per production, but due to the nature of this particular play, a talk back will follow each performance.

Although Oleanna’s world premiere took place almost 23 years ago, when the subject matter is taken into account, it may as well have been last week.

“None of the things the play brings up have gone away at all, in fact they’ve increased,” Boles said. “ … The issues the play raises are not specific to the early 90s. He was inspired by the Anita Hill-Clarence Thomas hearings but that’s not what the play is about. The fact that there are different perspectives of men and women, and what one woman might find offensive, a man would not and vice versa, and how those play out in an atmosphere like a workplace or in this case, a young college student trying to get a good grade from her professor.

“It’s an intellectual battle and it’s an actual, physical battle in the end,” he added. “It’s just the type of play where it’s not clear who is in the wrong and who is in the right.”

Madeline Bunke and Alan Kopischke will star opposite one another in the production, which will be held Thursdays through Sundays through March 29. Due to strong language and adult situations, children under the age of 14 will not be admitted.

Oleanna will be performed Thursday, Fridays and Saturdays at 7:30pm and Sundays at 2pm through March 29. Ticket prices for Thursday performances are $22, general admission for all other performances is $25, and students for all performances are $10. For more information, visit ThirdAvenuePlayhouse.com.