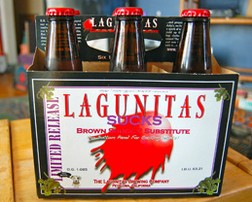 So I’m standing in front of the wall of beer, feeling a pull between a Flemish ale on the top shelf and an oatmeal stout on the bottom shelf when a beer in between taunts me. It’s not the first time this beer has caught my attention, and I think, “I know the Flemish ale would be delicious. Ditto the oatmeal stout. But I can’t even imagine what in the world is awaiting me in the Lagunitas’ Brown Shuggah Substitute Ale.”

So I bought a sixer, thinking it was going to be a sweetish brown ale. Surprise! It’s more like a big glass of grapefruit beer. Could that be why the words “Lagunitas Sucks” are more prominent than Brown Shuggah Substitute Ale?

Lagunitas doesn’t really suck, but when I see the words “ale” and a reference to brown sugar on a beer-shaped bottle, I don’t expect to be drinking liquid hops.

I believe I’ll use the five remaining bottles for cooking.

Sure wish I had an oatmeal stout right now to balance my Feng Shui. 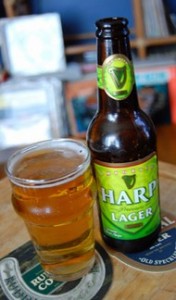 For St. Patrick’s Day I took my own advice and bought an Irish beer – Harp lager. Hadn’t tasted it in a long while, probably not since the Guinness Fleadh at the Arlington International Racecourse, the year Billy Bragg and Wilco debuted the songs from Mermaid Avenue three days before the record’s official release. Shane McGowan of the Pogues was there. Richard Thompson was there. Chris Gifford and Glenn Tilbrook of the band Squeeze were there. John Lee Hooker. X and a bunch of others. And only two kinds of beer were served – Guinness and Harp.

So it’s been a long time since I’ve had Harp, and now I remember why. I like my lager soft and malty sweet on the palate, in the Dortmunder lager or Czech pilsner style. Like many German lagers, Harp has a sharp and sour hop bite to its finish. Nothing wrong with that, but it’s not what I like in a lager.

And that’s the big fun of this beer evolution/revolution – there are many choices. You don’t have to like them all.