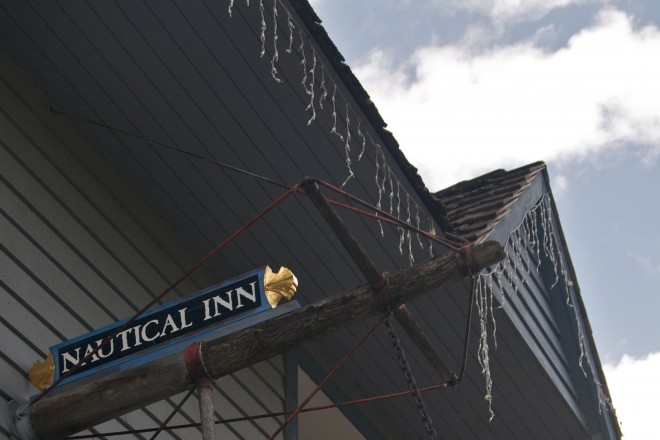 Sometimes putting a new twist on an old favorite works, and sometimes it doesn’t. Lucky for Door County residents and those who like to visit, Chef Andy’s Nautical Inn (referred to around town as “The New Nautical”) is a winner. Tucked into 234 Kentucky Street in downtown Sturgeon Bay, just a half block from the busyness of Third Avenue, this easy-to-find, hard-to-beat spot is the real deal. Since 1886, The Nautical Inn has been continuously serving hungry travelers and thirsty locals, making it the oldest – and some might even say the most beloved – Door County tavern. 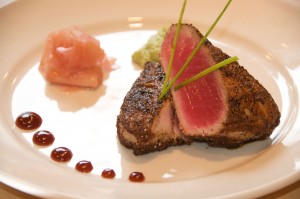 New owners Andy and Kay Mueller, who took over in March of this year, have clearly given it their full and careful attention, starting with a thorough cleaning, updated bathrooms, another thorough cleaning, and lots of time spent refurbishing the classic details that make the place shine:  dark, polished woodwork, gleaming hardwood and terrazzo floors, original light fixtures and a stone fireplace. The Nautical is a far cry from the predictable and somewhat sterile environs of most new restaurants; in fact, just a few steps into the entry and you feel more like you are entering an old British pub or an East Coast seaside tavern than a Midwestern dining venue.

“We looked a long time before deciding on the Nautical, from the tip of the peninsula to south of Sturgeon Bay, but nothing really grabbed us,” said Mueller. “My wife Kay has a great sense of what works and what doesn’t, and when we first stepped into the Nautical, we both fell in love with it.”

What’s easy to fall in love with is the Nautical Inn’s rich and somewhat colorful history. Mueller explains that hardly a night passes when a patron doesn’t tell him a story of the past:  an engagement party in the 1930s, a night of drinking with shipbuilding buddies during the World War II summers of the early 1940s, a love lost and fo 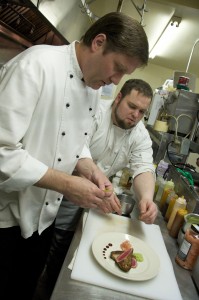 und again – all inside the walls of the Nautical. From hearsay alone, Mueller lists the businesses that have come and gone in the building at some point during the past century:  tavern, restaurant, barbershop, bank (they checked:  sadly, no stacks of money left in the old basement vault), high-brow hotel, low-brow brothel (tsk), and a speakeasy (tsk, tsk) during Prohibition years.

“The rumor is that what is now the private dining room was known for decades as the poker room, and too many businesses to count were lost and won in that room, which was convenient for the bank that used to operate in the building. Now we use this room for meetings and small gatherings – not as dramatic, perhaps,” Mueller chuckles, “but we still put it to good use.”

If you’re a returning guest, you’ll be pleased to see that much of what has made the Nautical a favorite stop has stayed the same, and the Muellers have added some modern conveniences. Have a drink at the bar or at one of the new pub tables in the barroom, and then step into the separate dining room to enjoy dinner. Both the bar and the dining room are smoke-free, and there is soon to be an outdoor beer garden that’s easily accessible for smokers and non-smo 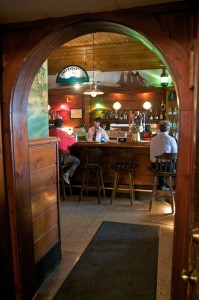 kers to enjoy. The dining room is warm and glowing:  it’s flexible enough to seat large, boisterous groups, yet intimate enough to accommodate diners who prefer the coziness of a booth. There’s a fireplace, a second bar, and just enough friendly bustle to make any diner feel welcome.

But it’s not just the friendly, comfortable atmosphere that’s appealing. Much of what’s quickly putting the Nautical Inn back on the map is the talents and direction of owner and head chef, Andy Mueller. Mueller is a familiar face and a familiar taste to Door County diners. For the past four-plus years, Mueller was chef and part owner of the Glidden Lodge, located just north of Sturgeon Bay on the shores of Lake Michigan. In addition to that, for years his weekly food column, In Good Taste, first run in the Green Bay News Chronicle and then in the Door County Advocate, has made Mueller a favorite advisor for those of us who cook at home.

“The column is written to show the average cook with usual ingredients that they have all they need to make a great meal. The recipes are accessible; if I don’t have it in my pantry, I don’t expect you to have it in yours,” says Mueller. Readers like Mueller’s casual writing style because he often throws in details related to the cultural or historical significance of a recipe, giving the reader a fuller understanding of, say, not only how to make salsa, but also the lively debate between the use of salsa versus ketchup. In short, he’s an entertaining read.

Mueller started his cuisine career early, working in restaurants to put himself through college so he could, he laughs as he says it, work in more restaurants. His résumé of the past 25 years involves working his way up an impressive list o 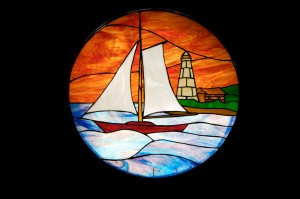 f Green Bay and Fox Valley venues:  the original downtown  Zimmani’s, Peggy’s on the Avenue, The Wild Onion, Gipper’s Sports Bar and The Black & Tan, to name a few. For a stint in the 1990s and a highlight of Mueller’s younger years, he worked as the personal, in-home chef of Packers player Reggie White. These diverse experiences, coupled with a marketing background and a few years of food sales experience (“The sales job was fun, but I found out that I’m a kitchen guy, through and through”) and what he calls “a true, undeniable passion for food,” have uniquely and thoroughly prepared Mueller for the job of owning his own place.

The menu is an eclectic mix of seafood (yellow fin tuna, pan fried walleye), poultry (cashew chicken amaretto), pasta (wicked shrimp linguine, Italian sausage marinara), and steaks and chops (too many cuts to mention:  beef is Mueller’s specialty – he buys primal cuts and butchers on site). A nice selection of appetizers (haystack onion rings, escargot in puff pastry) and nightly dinner specials round out the menu, and every meal includes a trip to the salad bar and a cup of your choice of two fresh and delicious homemade soups. Prices start at $12.95, and portions are more than generous. 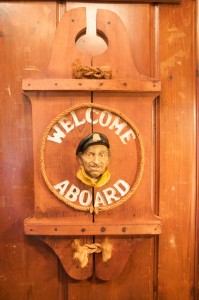 The Nautical Inn is open seven days a week, May through October, and six days a week during the off-season months. Monday through Saturday, dinner starts at 4:00 pm. On Sundays, the dining room and bar are closed in the evenings but open for brunch, 10:00 am – 2:00 pm. Keep your eyes open for the backyard beer garden, with outside seating and live music, which is in the works for this summer (call for specific details). The 30-plus member staff is comprised of familiar faces, many of whom have been in the hospitality business for years. The service is relaxed and professional, and the cooks, dining staff and bartenders are well-trained and friendly.

“It took me years to realize that to be successful, you have to give people what they want, and not try to push something that is more geared to the chef’s ego than it is to the customers’ tastes,” he says. “The truth is that we’re not reinventing anything. We’re offering great food, great service, great atmosphere and great prices,” said Mueller. “Our goal is to make everyone feel welcome.”

“It’s been fantastic so far,” says Mueller. “It’s really satisfying to take a place that was so loved by the community for so many years, and restore it to its vibrant, busy self again.”