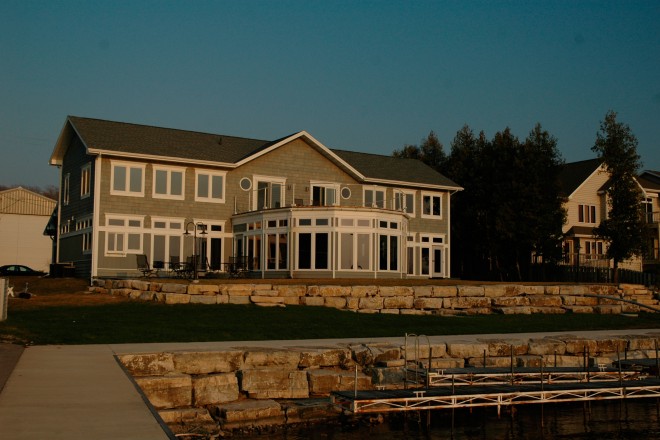 View of The Waterfront from the harbor. Photo by Dan Eggert.

There are many fine dining options in Door County, a handful of which have been good enough to draw attention to their chefs and menus from south of the Bayview and Michigan Street bridges and beyond. A couple of those restaurants have even combined their exquisite menus with limited views of the waters surrounding the peninsula and the inherent beauty of the natural Door County landscape. During the summer of 2004, however, when the aptly named Waterfront restaurant opened its doors on the north end of Sister Bay, it was clear that a new opportunity had arisen for diners to get a fresh peek at the hundreds of miles of coastline that the peninsula has to offer.

The Waterfront combines an exciting and inventive menu with a prime location directly on the shore, which affords patrons a stunning view of the waters of Green Bay and, on clear nights, the distant glow of Menominee and Marinette on the horizon. The Waterfront is owned and operated by J.J. Johnson. Before opening The Waterfront, Johnson was already the owner of one of Door County’s longtime favorite restaurants, hangouts and nightlife establishments: J.J.’s and La Puerta (“The Door” en español). The combined Mexican and American restaurants in Sister Bay have been a year round destination for locals and VISitors alike for many years, featuring the famous (or infamous) Bernie tequila shot.

Johnson has also owned the adjacent property just south of the La Puerta restaurant for over twenty years. The property was actually the Johnson family residence for many years. “My kids grew up there,” J.J. says. Also on the property was one outlet of the four Door County T-shirt retail shops the Johnson family owned and ran, only one of which remains today. That business location was closed when the new restaurant concept began to take form.

The old buildings were cleared about three years ago to make way for the new construction. The decision was made to build from the ground up, and to create a completely custom kitchen, bar and dining room. The new space, with high ceilings and an elegant entryway leading into a dining room in muted tones with beige walls and plenty of dark wood accents, seats about 100 patrons. The western wall of the new restaurant has giant windows facing the water.

The restaurant rewards its patrons with spectacular sunset views from the dining room and the small outside patio, immediately vaulted itself near the top of the fine dining hierarchy of Door County in its first few weeks of operation. Johnson describes the concept of the restaurant as having a “French flair.” The internationally-influenced, innovative menu features a great deal of fresh seafood; steaks and an herb crusted rack of lamb for the carnivores; and a regular vegetarian option as well. Johnson says that the restaurant did not start out to be fine dining; he claims, “It just ended up that way.”

Johnson’s son, Jesse, helms the kitchen at The Waterfront. “My son Jesse graduated from the University of Wisconsin, and then he started getting all these brochures for cooking schools. He said ‘Dad, I’m thinking about going to cooking school.”‘

The younger Johnson wound up attending the Culinary School of the Rockies in Boulder, CO, a small, nationally accredited culinary school nestled in the foothills of the Rocky Mountains that teaches students the foundation of French cooking — the basis of the modern culinary arts. As the son of a successful restaurateur, Jesse Johnson’s career choice seems almost inevitable. “He’s staying within the family tradition,” his father says. “I guess it gets into their blood; they’ve got a passion for it.”

During their inaugural summer season, Jesse and The Waterfront kitchen staff immediately demonstrated a high level of food excellence and created some instant specialties of the house. Among the early house entree favorites are a horseradish crusted grouper, steamed mussels in a coconut sherry cream sauce, and gently seared sea scallops and tuna steaks. One of the highlight appetizers featured on the menu is a fried calamari dusted with corn meal and served with a blood orange aioli. Besides a full bar with monster martinis, The Waterfront also features an extensive wine list with something for every palate and price range.

J.J. Johnson assures that along with the favorites from last year, 2005 will feature some new and exciting additions to the menu, along with a constantly changing offering of daily specials. During the off-season, while The Waterfront was closed, Jesse traveled southward for a month to study the cuisine of Puerto Rico and to pick up some inspiration and new ideas from the hottest chefs on that tropical island.

Although a fine dining restaurant, The Waterfront maintains a fairly casual atmosphere. One of the features of the new space is a large square bar, which quickly established itself during the summer of 2004 as a destination itself, with those outrageously large martinis and the opportunity to eat at the bar instead of seated at a table.

As one of the few fine dining establishments in Door County directly on the water, any discussion of The Waterfront has to begin and end with the view. With its spectacular summer sunsets – enjoyed from both outside on the patio during pre-dinner cocktails and inside the window clad dining room – the Waterfront benefits from what every real estate agent nationwide chants as a mantra: “Location, location, location.”

“Every seat is the best seat in the house, because every seat has a water view,” says J.J. Johnson. “That’s why I built this restaurant.”