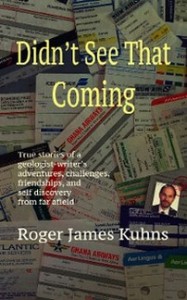 A geologist, environmentalist, world traveler and raconteur, Roger Kuhns has published a pastiche of his reminiscences that grew out of notes he took while exploring the world for mining corporations. His tales and original song lyrics first became the basis of his performance art and now have a second life as a composite memoir.

Kuhns’ journeys have taken him to five continents in the search for mineral deposits, primarily gold and silver. Rather than developing a chronological narrative, he has written a miscellany that occasionally travels in time, but is stretched on the framework of six metaphorical dramas, each with exotic settings: “Jungle Gold” (French Guiana in South America), “Jesus in Sumbawanga” (Tanzania), “Red Russian Girl” (the City of Noril’sk in Russia), “Crocodiles in the Desert” (Burkina Faso in West Africa), “Dreamtime Down Under” (Western Australia) and “Working Underground” (South Africa).

Each of the six figurative plays is divided into three acts, and each act, multiple scenes. The occasional digression of song lyrics makes them non-literal musicals of sorts, treading rather quickly over a great deal of ground. Fans who have enjoyed Kuhns’ dramatic monologues will want a copy of his book, as will anyone who is an armchair traveler at heart, curious about exotic but highly inconvenient (and sometimes risky) locations around the globe.

Kuhns will disappoint neither audience. While the book does not have a compelling page-turning narrative, it is nonetheless engaging because of the author’s ability to capture settings, characters and situations, making them come to life for his readers. At the same time he is a contemplative narrator reflecting upon himself, the people around him, and the societies that he encounters. He is a world citizen who moves unscathed from one culture to another, observing, reporting, and contemplating.

At times Kuhns’ tales are amusing, as when he experiences an unrelenting diet of lamb and mutton in Australia. He had to adjust his tastebuds to accommodate a mutton-based burrito. And once in search of variety he instructed the cook Matilda, who had offered the unvarying fare of lamb, peas and potatoes, how to make lasagna as a change of pace. She listened to his description of layered ground beef, noodles, cheese, and tomato sauce, and then produced her own version, layering lamb, peas, and potatoes with a few noodles, a sprinkling of cheese, but no sauce.

Cultural differences are inevitable, as when he finds the complementary shampoo in a West African hotel has a strawberry-bubblegum scent, but uses it anyway, and then finds fellow attendees at a business meeting suspiciously sniffing the air. However, a poignantly comic situation occurs when a Christian Tanzanian woman upon noting Kuhns’ white skin and dark beard becomes convinced that he is the second coming of Jesus. “And then I hear Jesus in my ear,” Kuhns writes. “This kind of thing happens to me all the time!”

The fauna, exotic by American standards, adds adventure to his stories, whether the lions that stalk people in Tanzania, the desert crocodiles that have taken refuge in caves in West Africa, or the road-kill kangaroos in Australia.

Because Kuhns is a geologist, those with that scientific interest will be curious about the technical aspects of his work. And others who find themselves concerned with the ethics of American exploitation of developing nations will appreciate Kuhns’ regret for unfulfilled promises of economic boons for struggling countries or for the substandard pay and unsafe working conditions for miners and factory workers, especially in the parts of the book dealing with Russia and South Africa.

Perhaps the most amusing piece in the collection is “The Tech Help Desk” in which Kuhns phones “Bub” (Bob), the out-sourced company tech support guy who claims he is stationed in Kansas City (but does not know that city’s weather) and offers the unhelpful advice to keep rebooting the computer as a remedy for Kuhns’ problem: “the screen’s freaking out and my programs crash.”

Those of us who have experienced such telephone conversations will appreciate the advice Kuhns was given by a veteran in his company: “Look, if your computer is not working, the best thing to do is stand on your desk and hold your computer over your head, and then drop it. You’ll get a new one. It’ll work for a while. When that one breaks, repeat this maintenance process.”

Didn’t See That Coming is available at Lost Moth Gallery in Egg Harbor and online at musictoearspress.com.