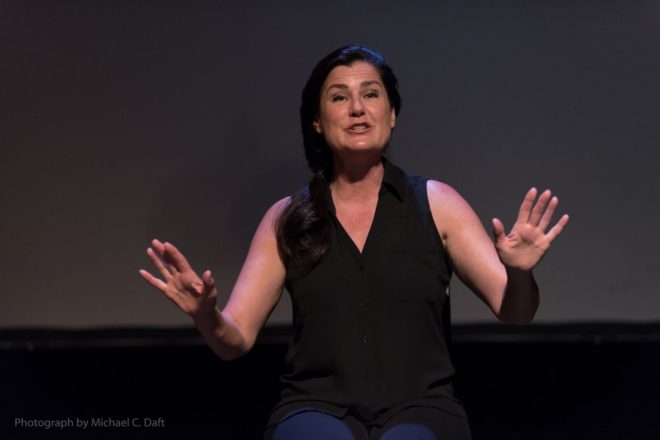 Former Scientologist, Cathy Schenkelberg, premieres her solo show at Rogue Theater. The Church of Scientology had actress Cathy Schenkelberg for 14 years; it took another five years to leave them behind in the face of harassing phone calls, midnight knocks on her door by “outreach” staffers, an expensive custody battle and constant paranoia about the monitoring of her every move. She has the courage to tell this hilarious and horrifying story under the direction of Shirley Anderson with sound and projection design by Victoria Deiorio.

Her story premieres in her new original solo show, Squeeze My Cans, for four performances, June 7-10, at Rogue Theater in Sturgeon Bay.

“Many of the people who went as far as I did in the Church lost everything, went insane, died or killed themselves,” said Schenkelberg. “I’m lucky to be alive and healthy.”

Squeeze My Cans shows June 7-10, Thursday-Saturday at 7:30 pm and Sunday at 2 pm. The June 7 performance is a special pay-what-you-can preview, with proceeds benefiting HELP of Door County.

In presenting this cautionary tale, Schenkelberg and Anderson hope to reach anyone who feels lost, desperate and alone, searching for answers to life’s problems, anyone who has lost a loved one to a damaging cult, and anyone who has already given up their identity, community and life-savings to organizations like Scientology. For more information visit squeezemycans.com or email [email protected]