As a kid, I loved spending summer at my grandparents’ house on an island-filled lake in northern Minnesota. I had cousins who lived close and one of our favorite things to do was run behind the county truck that would come a couple times during the summer to fog for mosquitoes. No one ever told us we shouldn’t be running into the fog of insecticide called dichlorodiphenyltrichloroethane, otherwise known as DDT. 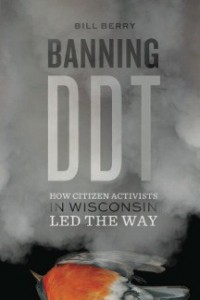 We were not alone. “Children of the 1960s in eastern U.S. cities – where DDT was aimed at the Dutch elm beetle – recall riding their bikes through the mist behind DDT foggers. They did not die, although countless songbirds around them did,” writes Bill Berry in his new book from the Wisconsin Historical Society Press, Banning DDT: How Citizen Activists in Wisconsin Led the Way.

Berry tells an amazing story of citizen advocacy that included a coalition of suburban housewives, birders, sportsmen, conservationists and scientists working in concert to stop the use of the “miraculous pesticide” DDT, which, in addition to killing insects, also killed songbirds and almost caused the extinction of raptors such as the Peregrine falcon by disrupting their reproductive cycles.

Berry writes that bird watchers had been warning about the effect of DDT on songbirds since 1945. By the late 1960s, “it had also become clear that DDT was accumulating in lakes and rivers and threatening the state’s billion-dollar sportfishing industry.”

DDT was first synthesized in 1874 but it wasn’t until 1939 that Swiss chemist Paul Hermann Müller discovered it to be an effective insecticide. DDT was then used in the second half of World War II to control malaria and typhus among civilians and troops. In 1948 Muller was awarded a Nobel Prize for bringing DDT to the world. 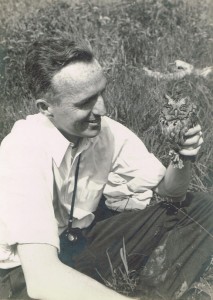 In his prologue, Berry points out that the ban on DDT was never universally proclaimed as a good thing for humankind and that some argue to this day that the ban “removed one of the world’s most important pesticides from the public health and agriculture and forestry toolboxes,” and that “millions died from malaria in developing countries once DDT use was scaled back,” and that the citizen movement against DDT opened the door to a marriage of science and citizen activism led by “food faddists (a then-popular term for organic food advocates opposed to pesticide use), nature lovers and Marxists.”

But, he adds, “What is clear about Wisconsin’s DDT battles is that a handful of citizens did make a difference. That is a lesson worth revisiting.”

The citizen advocates put DDT on trial in Madison in December 1968 through a declaratory hearing that would last into the spring of 1969. It would take another year before the hearing examiner, Maurice Van Susteren, would issue his ruling.

At the time, the state Department of Natural Resources had already banned the use of DDT on state lands, while the Department of Agriculture and its economic entomologists continued to promote its use. Berry tells us those same differences in attitude toward DDT were reflected at the University of Wisconsin between the College of Agriculture faculty and other departments, such as the Department of Wildlife Management founded by Aldo Leopold. One of the heroes of Berry’s book is Professor John Hickey, who was hired by Leopold in 1947 and took over the department when Leopold died fighting a neighbor’s fire in 1948.

Hickey began questioning DDT in the late 1950s, but Berry says Hickey was told to keep quiet with his research about songbird mortality and DDT because, as Berry explains, “He was in the College of Agriculture, where DDT was being recommended for use in the battle against insect pests, whether in agricultural fields or stately elm trees.”

Berry writes that Hickey remained quiet on the issue of DDT until he had enough research backing his position, which turned him into “a fearless, if reluctant warrior.” 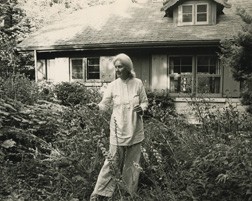 Lorri Otto, at her Bayside home, was a key citizen activist in the effort to stop DDT use. Photo courtesy of the Wisconsin Historical Society Press.

One of the other heroes is Lorri Otto, one of the suburban housewives who noticed dead and dying robins in her home garden in the affluent Milwaukee suburb of Bayside. She once presented 28 dead robins to the Bayside village manager. Berry writes that once Otto got involved in the move to ban DDT, “She almost instantly became a big player.”

There were other big players, and Berry tells their stories with great efficiency. Ultimately, examiner Maurice Van Susteren ruled on June 10, 1970, against DDT, saying, “No concentrations, levels, tolerances, or amounts can be established as safe.”

It would be another two years before DDT was banned by the Environmental Protection Agency for causing “adverse environmental effects.” Wisconsin’s hearing on the insecticide played a “crucial role,” Berry writes.

DDT continues to be used in Third World countries for control of malaria.