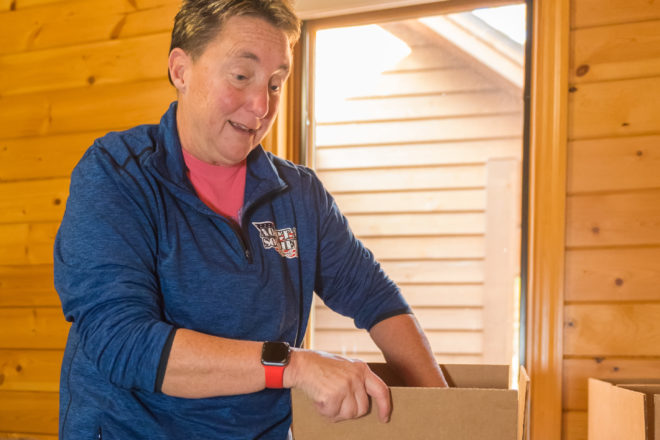 Nancy Hutchinson prepares care packages for the troops through the Adopt-a-Soldier program at her home.

Hutchinson, the creator of Adopt-A-Soldier Door County, was nominated by her State Representative, Joel Kitchens, for founding and growing the Adopt-A-Soldier non-profit over the last nine years. Annually, Hutchinson and volunteers for the program send out 1,504 care packages to 190 local service members stationed around the world.

The idea for Adopt-A-Soldier Door County began when Hutchinson sent her son’s best friend a care package with toiletries, nonperishable foods, and games when he joined the marines. Since then, the program has expanded to service members outside of Door County, attracting sponsors like Hershey’s and Jack Links. Thanks to Hutchinson’s work, overseas service members can enjoy the comforts of home while serving their country.

The Wisconsin State Assembly sees giving back to the community as one of the most valuable characteristics one can have. The Assembly Hometown Heroes program seeks to identify and recognize individuals from around the state who give of themselves to make a difference in our communities and in the lives of those around them. Hometown Hero Award winners are invited and introduced as a special guest at an Assembly floor session and given the opportunity to speak.