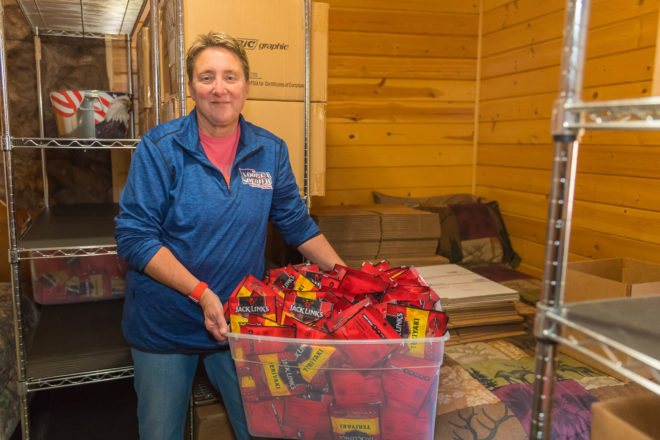 The troops’ favorite, and often fought over, snack is beef jerky. Photos by Len Villano.

It started with one young man in 2008. Matt Olson, a graduate of Sevastopol High School, enlisted in the Army and was twice deployed to Afghanistan. Nancy Hutchinson, who said Matt was “like a third son in our family,” remembered that her dad, Vickson Palmer, a veteran of the Korean War, and her husband, Clyde Hutchinson, who served in Vietnam, both talked about how lonely it was, thousands of miles from family and friends.

Nancy thought packages of snacks and other items would remind Matt that people back home were thinking of him. She gathered some things and added homemade treats. She challenged Sevastopol students and staff to get involved and ended up sending 40 care packages to Matt and his platoon.

As word spread about Nancy’s idea of adopting a soldier, people suggested more recipients. Mike McCarty and Jared Spude, also serving in the Middle East, were added to her list.

Eventually, with support from the Forestville American Legion Women’s Auxiliary, Nancy named the project Adopt-a-Soldier and expanded it to include any serviceman or woman from Door and Kewaunee counties. She’s currently mailing about 1,000 packages annually to 194 members of the armed forces. Each of them gets several boxes each year, so they can share with buddies. 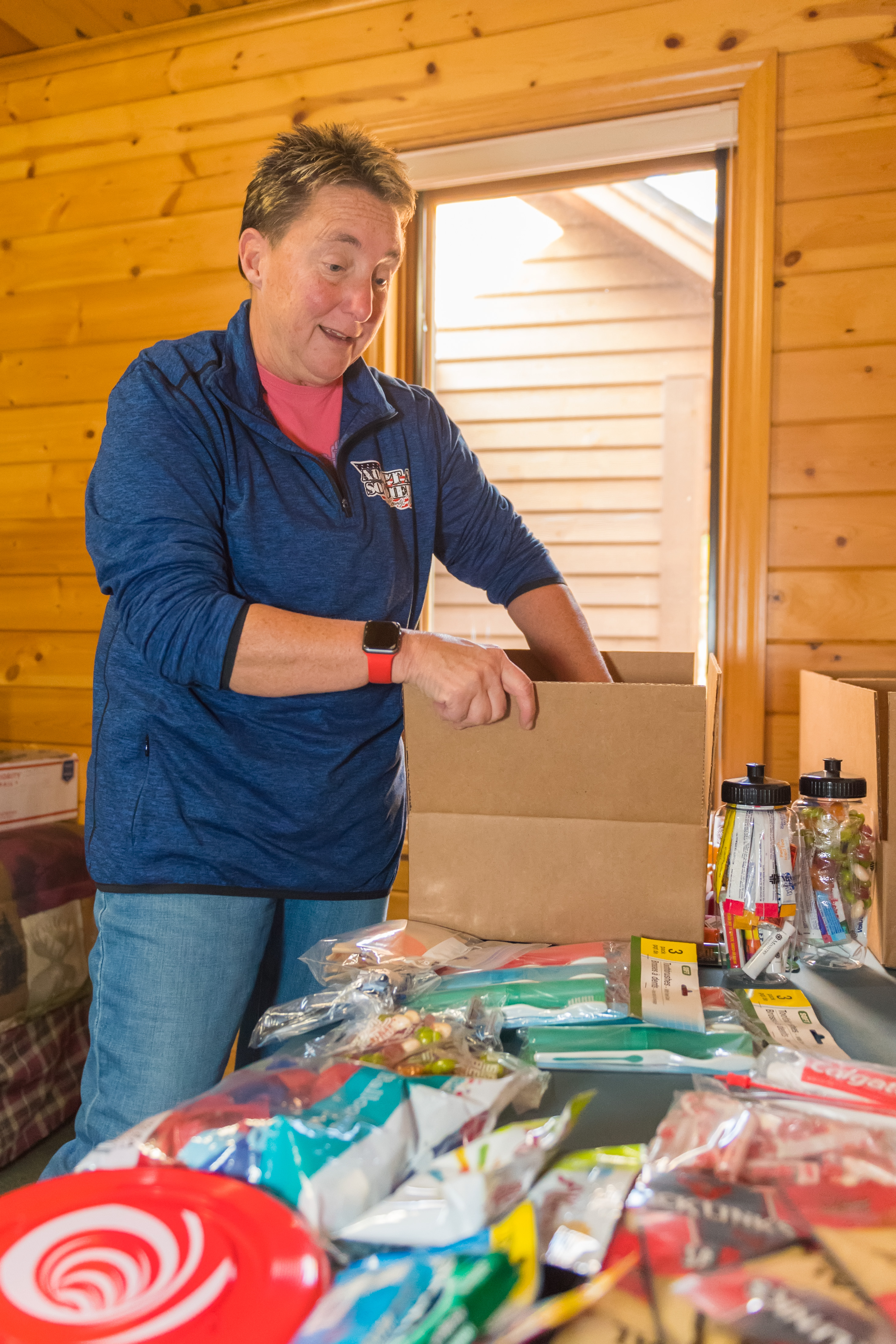 Nancy Hutchinson prepares care packages for the troops through the Adopt-a-Soldier program at her home.

When members of the reserves are deployed, their names go on Nancy’s list, as are the Marine detachment in Sturgeon Bay, who help veterans find jobs.

The men and women at the Sturgeon Bay Coast Guard Station are also included because, even though they live in our community, they sometimes need extra help that may take the form of groceries for their families, school supplies or Christmas gifts for their children. A dog named Moose lives at the Coast Guard station, and the boxes delivered there always contain something to help with his care. The same is true for the packages heading overseas, if Nancy knows a unit has adopted a pet.

It takes a lot to fill the 1,000 boxes that go out in eight mailings a year. Just as the community supplies the names of recipients, local individuals, organizations and businesses provide what goes into the packages – snacks, candy, energy drinks, personal care items, small puzzles and games, handmade gifts, Door County-related items, used DVDs and things that have been specially requested. Students in local schools and organizations send handwritten notes. Nancy has placed collection bins at many local banks, and a number of churches have sponsored collections among their members.

An annual fundraiser (Aug. 4, 2018) begins with an all-you-can-eat breakfast hosted by the Sturgeon Bay Fire Department and is followed by a barbecue at Martin Park with live entertainment and a flag ceremony led by the Forestville American Legion Post. Food is donated by local merchants, and the goal of raising $20,000 – what it costs to mail 1,000 packages each year – is bolstered by drawings and silent auctions for tickets donated by Disney, the Packers, Brewers, Admirals and Timber Rattlers, vacation stays, gift certificates and many other donated items.

Nancy’s efforts have also resulted in donations from far beyond the Door Peninsula. Cases of candy for the care packages arrive regularly from companies like Hershey’s, Jelly Belly and Smarties.

A few days ago, 100 care packages were assembled at Nancy’s home in Sturgeon Bay to be mailed to servicemen and women spending Thanksgiving in Afghanistan, Somalia, Saudi Arabia, England, Germany, Japan, South Korea, Guam and Romania. Everyone involved with the project, including Nancy, is a volunteer, even though for her, the project is almost a full-time job. “I maybe take one day a week off,” she said.

“I am so grateful to our community, for not forgetting about the men and women who are serving far from home. It means so much to the soldiers who receive the packages and those they share them with,” she said.

When Jared Spude, one of the earliest care package recipients, came back home to Door County, he told Nancy how proud and grateful he was for the support he received from the community. His motto, he said, was, “Give without remembering, receive without forgetting.” It’s now the official motto of Door County’s Adopt-a-Soldier program.

Learn more about the project on Facebook by searching for “AdoptaSoldierDoorCounty,” or visit. AdoptaSoldierDoorCounty.org. To volunteer or donate, contact Nancy at 414.333.6648 or [email protected] Financial contributions can be mailed to her at 5676 Trails End Ct., Sturgeon Bay, WI 54235. Adopt a Soldier is a 501(c)(3) organization.