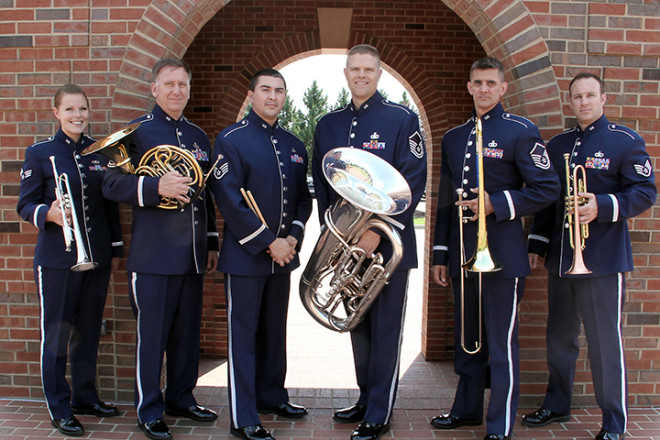 “We like to showcase the music of our great country, our national musical heritage,” said Technical Sergeant Matthew Kuebler, the Noncommissioned Officer (NCO) in charge of the Airlifter Brass Quintet.

The ensemble, connected with the United States Air Force Band of Mid-America, will observe Veterans Day by performing concerts on Nov. 9 at Shepherd of the Bay Lutheran Church in Ellison Bay (followed by a reception), and Nov. 13 at the Door Community Auditorium in Fish Creek, both events beginning at 7 pm with free admission.

The Airlifter Brass Quintet offers the traditional instrumentation of two trumpets, French horn, trombone, tuba and percussion, and performs a repertoire drawing upon five centuries of music dating from the Renaissance through traditional American styles, including marches, jazz standards and patriotic favorites.

Serving as musical ambassadors for military and civilian audiences over a 10-state area ranging from upper Michigan to Arkansas, the group’s mission is both to inspire and entertain.

“We connect the wonderful things the Air Force is doing with the public,” Sgt. Kuebler said. The ensemble performs for 10 to 15 venues each month, both on base and on the road.

Previewing the Door County concerts, Sgt. Kuebler said the program would include some Debussy, the tunes “Maria” and “Tonight” from Westside Story, “Uptown Funk” by Mark Ronson (featuring Bruno Mars), a light-hearted jazz version of a favorite march, “Stars and Stripes on Bourbon Street,” and in recognition of Wisconsin’s German heritage, polkas (Kuebler, incidentally, playing tuba).

The highlight of the evening, Sgt. Kuebler said, will be a medley of armed service music honoring veterans, recognizing the sacrifices they have made for their country.

Kuebler takes a personal pleasure in the Airlifter Brass Quintet because of “the variety of music performed by this most versatile group.” And he remembers fondly his earlier appearance with the U.S. Air Force Band of Mid-America at the Door Community Auditorium in the beautiful setting of Door County.