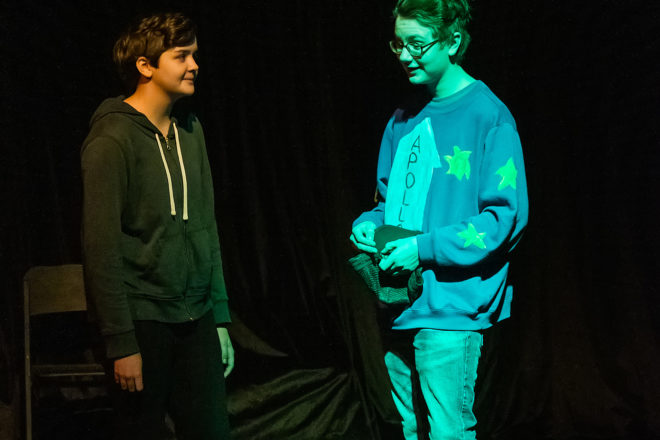 This year when the StageKids take the stage for their annual December production at Third Avenue Playhouse (TAP), there will be a notable difference from shows of the past. Instead of angels heralding the Christmas season on stage, aliens will be coming down to Earth and meeting its inhabitants.

The change comes thanks to TAP production manager Alex Genty-Waksberg, who is at the helm of this year’s StageKids production. “TAP usually does a Christmas show at the end of the year. I am Jewish and was not particularly interested in directing a Christmas show,” said Genty-Waksberg. “While talking to Bob [Boles] and James [Valcq, co-artistic directors] about my options, James suggested that I could write my own play. My background is in playwriting, so I jumped at the opportunity.” 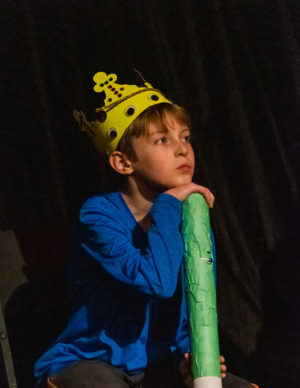 From a rehearsal of “The Whaliens.” Photo by Len Villano.

The cast was especially appreciative of working with Genty-Waksberg as both director and writer. Being an original play, the cast evolved their roles without having preconceptions of how characters should be played.

Samuel Parentean, a freshman at Sturgeon Bay High School, said, “In other school plays, everyone knew the story — certain spots and certain lines — and in this show, it’s more natural.”

There was also a more fluid process of working through the lines because the writer was right in front of them, and they could make adjustments on the fly. Krista Jacobson, Gibraltar sixth grader, said, “Working with the writer is nice because we know why he thought of something and understand it a little better.”

The Whaliens tells the story of Luna, a girl in high school who is visited one night by a group of aliens that call themselves Whaliens. Their planet has become uninhabitable, so they are considering moving to Planet Earth. Luna must contend with the fate of the planet and, even more difficult, the trials and tribulations of being a teenager in high school.

Genty-Waksberg said, “I usually like to write fantastical elements into fairly mundane situations. I wanted to write something that the kids could relate to, so I wrote the protagonist as a high schooler, and thought about what kind of absurd event might shock a kid out of the routine of high school. Getting visited by aliens seemed fitting. And the theme of aliens is a good one because it speaks to feelings of being an outcast, the weirdness and diversity of people, and how our problems are simultaneously very important and also completely insignificant from a universal perspective.”

Two well-spoken ninth graders confirmed Genty-Waksberg wrote relatable parts that transcend the sci-fi subject matter when they spoke about The Whaliens. Scout Feldman, of Sturgeon Bay, said she related to her character because “Wendy [Luna’s best friend] struggles with test anxiety, which I also struggle with … and with some of the lines, I’ve said them in real life to my friends and family.”

Dalena Pakalske, of Southern Door, agreed with Feldman and added that anxiety is triggered not just by something extraordinary, like aliens, but by “anything outside your school or home life that is detrimental to your mental health.” 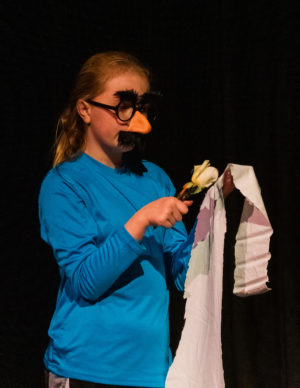 From a rehearsal of “The Whaliens.” Photo by Len Villano.

Although the elementary students haven’t fully felt the pressures of high school yet, Genty-Waksberg didn’t forget about them when writing the play. He thought the younger kids would have fun playing the Whalien rulers. This was the case for Wolfgang Peters who said he had the most fun changing his voice to say his alien lines: “We project our voice and act disturbed. I’ve never been that mad before or yelling that loud before.”

With the flexibility of having the writer as director and with the tight-knit friendships that form with a small cast, the StageKids cast experienced a certain type of freedom in their weekly rehearsals that will show on stage. The cast, similar to their alien and human characters, came together when ordinarily their worlds are far apart — separated by grade level or school district. And not unlike the characters in the play, they’ve learned lessons along the way.

Xavier Ortiz, fifth grader at Valley View Elementary, summed up his experience best when he said, “It’s been a really big experience. I’ve never really done plays before. It’s actually my first time doing something without my parents. I shouldn’t always be nervous, and meeting new people isn’t always as bad as you think.”

The Whaliens will be performed on Nov. 30 and Dec. 1 at 7:30 pm and on Dec. 2 at 2 pm. General admission is $15 and students of all ages can see the play for free. Third Avenue Playhouse is located at 239 N. Third Avenue in Sturgeon Bay. For more information visit thirdavenueplayhouse.com.